Dottie presents me with an interesting question, and maybe also answer, about genetics.

The first thing I noticed when the bloom opened up was that Dottie's ID number is very close to other seedlings that have bloomed -- 0108 "Deena Sequins," 0110 "Delta Badhand," and 0116 "Eileen Dover." Which suggested that maybe they were all from the same cross.

And when I looked, I found that three of the four (Deena, Delta, and Dottie) had the same seed parent (NOID purple) and sow date (21 December 2011), so they are definitely from the same cross. Eileen, though, is from a different seed parent ('Orange Hot'), with close to the same sow date (7 December 2011). So possibly there was a reciprocal cross done between the NOID purple and 'Orange Hot' during the summer of 2011, which resulted in these four more or less identical-looking seedlings.

Two other seedlings resemble 0108, 0110, 0112, and 0116. 0046 "Aurora Boreanaz" fits the theory fine, or at least doesn't contradict it: Aurora's seed parent is also the NOID purple. 0132 "Eve Stropper" is trickier. Eve's seed parent is 'Gemini.' None of the seedlings can have the NOID purple, 'Gemini,' and 'Orange Hot' as its parents simultaneously, so obviously more than one cross is capable of producing a bloom like this. 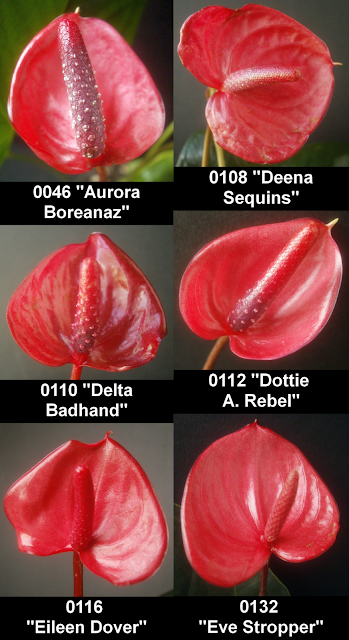 So what's the most distinctive thing about these six? It's not the color -- I've seen plenty of red spathes, after all -- it's that the spadices match the spathes. So I looked at all the blooms so far where the spathe and spadix match, and what the seed parent was in those cases. There were three from 'Gemini,'

five from the NOID purple, 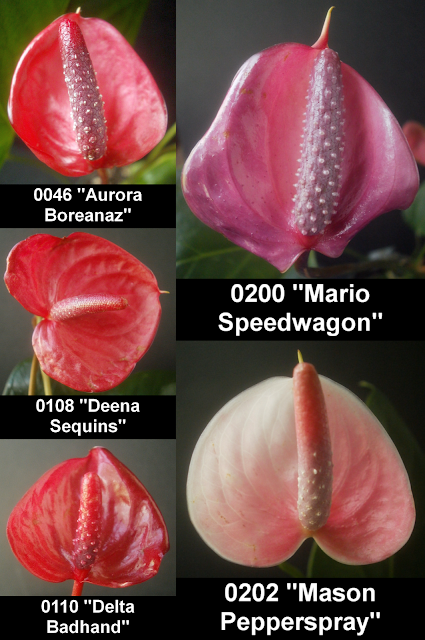 one from the NOID red, 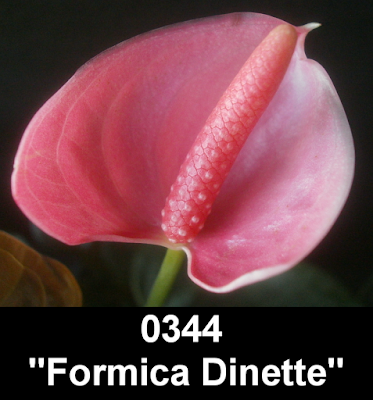 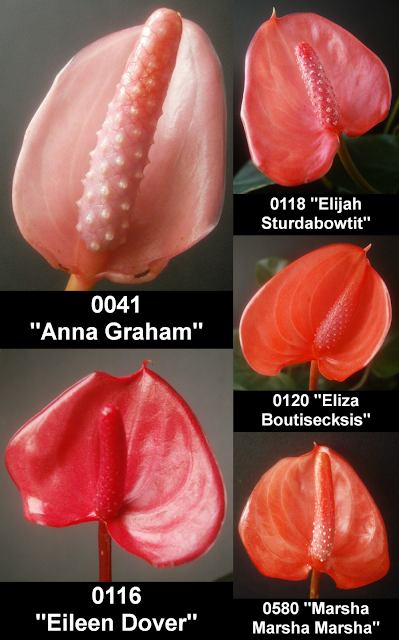 and seventeen from 'White Gemini.'

The parent plants 'Gemini' and the NOID red have contrasting spadices. So they're probably not where this characteristic comes from. I suspect that although the spadix and spathe match on 'White Gemini,' it probably has the genes for a contrasting spadix, since it was supposedly discovered as a mutant of 'Gemini.'1 It's certainly imaginable that 'Gemini,' the NOID red, or 'White Gemini' might have recessive matching-spadix genes or something, since they're all hybrids, but if we're just making a guess anyway, it seems simpler to assume that the matching-spadix genes are coming from plants with matching spadices.

There's another hint in that as far as I've seen, 'Gemini' and 'White Gemini' have never produced pollen for me. Which means that unless they're being super-sneaky about it, they're probably not the ones introducing the matching-spadix genes.

The NOID red can probably be ruled out on the grounds that it has some pretty distinctive characteristics (large, wide, flat dark green leaves which are sometimes red or brown while developing, green spadices, sometimes a peculiar angle to the way they hold their leaves), which it tends to impart to its offspring, and none of the plants from the red/red group have any of those characteristics.

Three other parent varieties with matching spadices could have been part of the genetic mix when 0112 was being conceived -- a NOID pink which sometimes produces pollen but has been mostly unsuccessful at producing seeds and seedlings,2 and 'Red Hot,' which looks a lot like the 0046/0108/0110/0112/0116/0132 group, but has only ever produced one seedling, which didn't even survive. And which I can't remember ever producing any pollen. In fact, it's been at least a couple years since 'Red Hot' even bloomed, and it's never been a strong bloomer for me. So 'Red Hot' is probably not where these seedlings came from, however much they may resemble it. The third possibility is 'Pandola,' which does a weird thing where the spadix is initially pink or orange-pink at the base and yellow towards the end. (The two-color thing isn't distinctive, but the specific colors involved are.) 'Pandola' definitely produces both pollen and seeds both, but the two-tone spadices are distinctive.3 And the red-red group doesn't have those.

That's what I'm guessing from looking at Dottie. Am I right? Am I wrong? Probably some of both. Perhaps plant paternity testing will be cheap enough someday that I can find out for sure. In the meantime, I can entertain myself by guessing.

As far as deciding whether Dottie specifically is a keeper or not, well, I have no particular problem with the bloom. 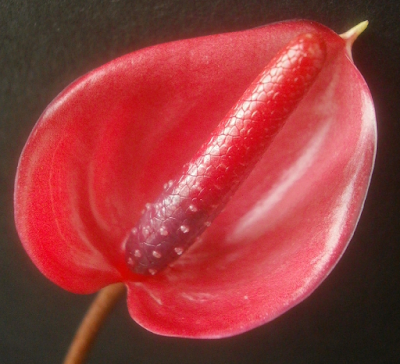 I often don't like matching spadices, but I find red/red and orange/orange a lot less objectionable than pink/pink. 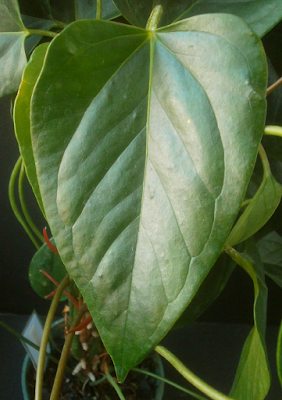 and the plant as a whole is notable mostly for how long and unmanageable it is, though I guess it's also worth mentioning that it's done some spontaneous branching, which not all Anthuriums will bother with. The branching is completely obscured in this photo, but trust me it's there: 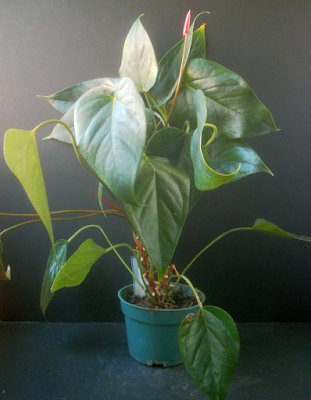 So on balance, I guess I'm fine with Dottie and would expect to keep her around for a while -- at least long enough to see whether she'll reproduce -- except that she has also had the bad luck to be living on one of the three shelves in the basement with scale-infested Anthuriums. I can't remember for certain, but I don't think I've seen scale on Dottie specifically yet,4 so there's hope, but I also periodically think maybe I should just sweep the whole shelf clean and start over. So we'll see what happens.


1 'Gemini' and 'White Gemini' both have spadices that are often initially white and then change to light yellow. The seedlings with contrasting spadices mostly either start out white and change to yellow or start yellow and change to white. (Also 'White Gemini' frequently has a little bit of pink in the spathe as it ages.) So even though 'White Gemini's spadix does initially match, I don't think it should count as a matching spadix for genetic purposes, because it otherwise behaves like a contrasting spadix, and it's a mutation of a plant with a contrasting spadix.
2 For various reasons. 1) I generally don't try, because why would I want more pink? 2) although I have four plants from the NOID pink, they don't bloom very often, so I rarely have any opportunities to try. 3) seedlings from the NOID pink have a worse than average survival rate (63% for NOID pink; the overall average is 68%).
3 This is all very tough to prove, or even illustrate well, because of differences in the way the plants photograph at different times, and the ways that blooms change over time, but I think it's very likely that, say, 0083 "Carmen Adairya" is 'Gemini' x 'Pandola,' because that is totally 'Pandola's spadix: 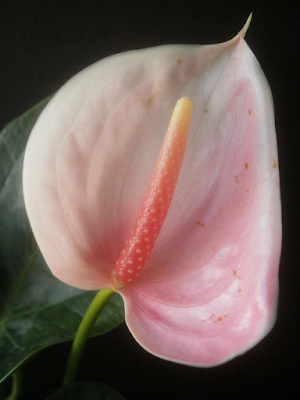 4 The problem with this is that seeing scale and not seeing scale both mean the same thing: that there could be scale. So it sounds like good news, but is not. There is never any good news.
The scale situation has consumed an enormous amount of my emotional energy over the last three years, which is all the more remarkable considering that as far as I remember, scale have never directly killed any of my plants, and rarely even accumulate to the point of making the plants unsightly or sticky. What kills the plants is me deciding to throw them out because they have scale; what makes them sticky is me spraying soybean oil all over them in the course of trying to kill the scale. Scale are sort of my own little horticultural autoimmune disease.
*blink* I'm not sure what to do with this realization, now that I've had it. I mean, surely the answer is not to embrace the scale.
Posted by mr_subjunctive at 3:00 AM