I panicked for a second yesterday morning. Oh, crap, I need to do a blog post for tomorrow and I don't think the plants are doing anything, what can I write a post about? And then I looked at the queued posts and saw that there was an orchid post scheduled, so I didn't have to come up with something, and was relieved.

And then I looked at the photos, and was concerned again. 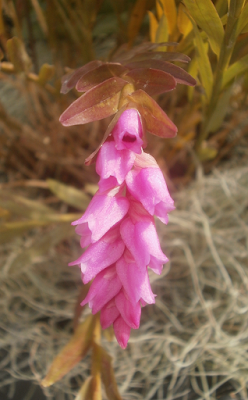 The notes I wrote down in March say that I found this one somehow "friendly and fun-seeming" despite its odd appearance. (It must be true -- I mean, I wrote it down and everything -- but I can't say these qualities translated to the photos very well.) I went on to note that the foliage was a lot stiffer than you'd think from looking at it, which I do remember (one doesn't expect to be stabbed by an orchid), so "friendly" seems even less appropriate, but whatever. 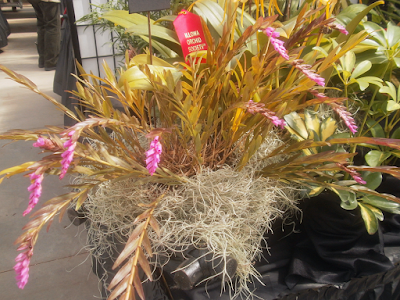 Isochilus is a new genus for the blog; I. linearis seems to be the main species in cultivation, though I did find some I. aurantiacus (orange flowers) references around as well. I. linearis is, I think, not supposed to be as yellow as the plant in the photos, either -- most of the photos that come up in an image search show green leaves. Some of that could be my camera's fault, though I remember thinking at the show that the leaves were pretty brown, so it can't all be the camera.

Wow, odd indeed! I've never seen a plant in the orchid family like this before, I really like it!