There's nothing new going on here at the moment -- believe me, I tried to find something better than this to talk about1 -- so I thought this might be a good moment to ask a question that's been rattling around in my head for a couple years instead.

Why do people not deliberately cultivate red clover (Trifolium pratense) in their gardens?

I mean, yeah, I get that it's weedy and would tend to take over, given enough time, but gardeners overlook that in other plants, so it doesn't seem like that would be enough to disqualify it. And rabbits like it, but again -- that doesn't stop anybody from growing lots of other stuff. And it has good points. The flowers are pleasant, and numerous, 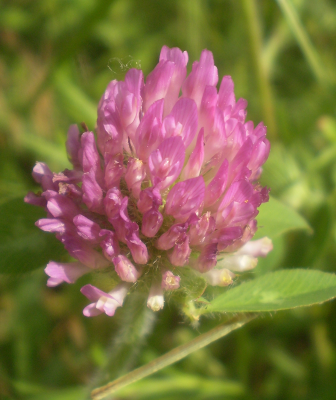 and even mildly fragrant. Bees love them. They improve the nitrogen content of the soil. There's a medicinal use for them.2 The plants quickly reach a mature height of about two feet tall and then stop getting taller, which seems to me like it should be a good quality for an outdoor plant.


1 There have been a few new first-time Anthurium blooms (0335 "Donna Fanuday," 0346 "Lois Carmen DiNominatre," 0360 "Heidi Gosique," 0373 "Shangela Laquifa Wadley," 0597 "Raven"), but Shangela is hideous, Donna, Lois, and Raven aren't fully opened up yet and have so far photographed terribly, and Heidi is basically a repeat of 0357 "Rhea Litré." I mean, I'll get to all of them eventually, I'm sure, but as a group they're kind of underwhelming. And in any case I'll have to sort through a bunch of photos first.
2 I'm not generally that impressed by claims that a garden plant can be used medicinally, because I really kinda feel like people are better off not gambling with self-administering unproven chemicals they don't really understand, at an unknown dose, with no supervision by a medical professional, but some people consider it a point in a plant's favor if it's "useful" for something, so that seems like it should be a point in favor of deliberate cultivation.
3 Didn't this year, because they were getting so big so early that they threatened to shade out the reseeded Portulaca grandiflora before it even had a chance to germinate. And yes, that means I've had a lot of seedlings to pull up. But the Trifolium is a much easier weed problem to deal with than, say, dandelions, maple tree seedlings, Oxalis, lamb's quarters, or crabgrass. If not for the Portulaca, I would have been perfectly happy to let the clover have the bed this year.
Posted by mr_subjunctive at 3:00 AM

Good question. I think the problem is the aggressive nature of the plant. It could quickly take over a garden if planted. Of course I have active dogs so the backyard is full of thuggish plants so that they have a chance to survive being run over, dug up and trampled.

Besides the Garden Poison Industry (mostly a company represented by a fake Scottish guy) tells me it's a weed and I need to buy their product to kill it. Sadly, lots of people take lawn and garden advice from people who are trying to sell them something.

[also I strongly agree with point number 2! It amazes me that people don't realize that we don't always know what's in herbs or herbal supplements, what the dose is, what it does, what the side effects are, etc. A drug is a drug is a drug, there's nothing magical about it being in an unpurified, unstudied form.]

Don't know much about the red variety, but this spring we overseeded our patchy, half-dead lawn with white clover. Like you said, clover fixes nitrogen, which makes the remaining grass healthier--but it also requires very little watering (once it's established), no fertilizers or pesticides at all, and you don't have to mow it as often. It'll stay green most of the year, too. And yet the neighbors were absolutely horrified by the WEEDS we were deliberately introducing into the neighborhood...

Why do we even have grass lawns to begin with? We can all go back and blame the English. The book "America's Love Affair with the English Garden" which I got through you a year or two ago, really was a rather interesting read. The American obsession with the "picture perfect" grass lawn can be traced back to the English. In conjunction with that came the attitude(s) of which plants were "undesirable" and which ones should be highly prized. (It was interesting to note in that book how many native plants Americans had no interest in until AFTER the very same plants were lauded over in England.) Personally, I like dandelions (which puts me in a minority, I know). Whilst in their seed stage they are not terribly attractive, I find the flowers quite cheery. Similarly, I like clover -- for all the reasons you mentioned.

I also find this to be a good question - and a question to be asked not only about this species. I haven't specifically thought of Trifolium before (probably because they are abundant where I live and I see them enough to satisfy my needs, or probably because I don't have a garden), but I did have the same thought about some other species. Malva neglecta was one for instance. I like the leaves, I like the flowers, I'd like it to be around more than it is now (it was more common when I was a child), and it is edible. Not that the tiny fruits have an outstanding tase but I like them, and if I am out in the wild and find them I usually pick a few. I guess that's the taste of childhood for me :D
Another plant I find beautiful is Cichorium intybus. Granted, its leaves or overall shape aren't very exciting and it looks quite "thin", but I really like the flowers. And the ultimate candidate for me for this question is Onopordum acanthium and the weedy members of the Carduus genus. They can get huge and are super spiny, but its flowers are such beautiful purplish pink fluffballs, and the plant looks beautiful already without buds or flowers, the shape, texture and organisation of the leaves often makes me stop and think that people would definitely buy a plant with similar characteristics if it was sold in a pot.

I think here in Europe (at least where I live) we have a more relaxed attitude about grass lawns. In fact, certain wildflowers are encouraged to "invade" home gardens. Clover's going to grow wherever the grass is scrawnier so there's barely any point in growing it in flowerbeds.

Besides that, my theory is that since clover is also grown for animal feed less informed people are inclined to believe it is an agricultural weed and are thus skeptical of its value regardless of the plant's attractiveness.

Don't blame me, I may be English but my last lawn was solid dandelions and daisies. It was a spectacular carpet of gold that soon turned into a carpet of silver. Not a blade of grass in it.

I would love to see your lawn, Pat! That would be quite a sight.

I do cultivate it. I've got it growing in my vegetable garden. When it gets too big and is crowding out the veggies I chop it back and use it as mulch. It grows back and blooms and I repeat the process. I do think I want to plant some in other places where I can leave it alone and the bees can enjoy it.

Greetings! Today I've seen some hybrid clovers with variegated foliage at sale. Apparently they were not red. But really fascinating.
Red clover is widely used as seederate, if it fits in as cultural usage.