"Philippinense" is a difficult word to spell correctly. One L and two P's, as opposed to the more common "Phillip," with two L's and one P. Though I suppose if you spend a lot of time thinking or writing about the Philippines, you probably get used to it. (Though, then, do you start having trouble spelling "Phillip?") 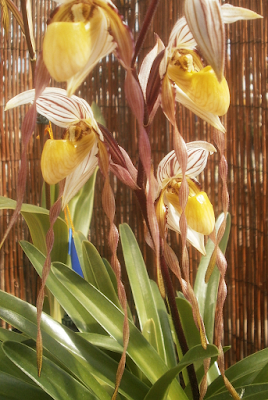 I knew Phragmipediums could have ringlety petals (or are they sepals?), but I feel like I didn't know until now that Paphiopedilums could as well.

We haven't seen Paph. philippinense var. laevigatum, as such, on the blog before, but we've seen a named clone:

and three of its hybrids:

So I think it's safe to say we've got most of the Paphiopedilum philippinense bases covered.