I e-mailed my local Iowa State Extension Office on July 29, asking about tests for dasheen mosaic virus (DsMV), as discussed in the comments to this post. They replied immediately, and recommended I ask the ISU Plant and Insect Diagnostic Clinic about it. So I sent the same e-mail to the ISUPIDC.

On August 20, I heard back from the ISUPIDC. The answer was: no, they do not test for DsMV, but they did know of a company that might, Agdia, Inc.

Agdia does in fact do DsMV testing, which is great, but they won't tell you on the website how much the testing costs. I assumed that that meant that it was an if you have to ask how much it costs, you can't afford it situation, but e-mailed Agdia to ask anyway, and got an autoreply "I will be out of the office until ______" message, because everything has to be fucking impossible today.1

In the end, it's not going to happen: testing one sample is $67 at Agdia ($9 per additional.), which is more than I want to spend to answer this particular question. But if I change my mind later, I have somewhere to go. So thanks, ISUPIDC. I guess.

The other unfinished business is related to the ongoing thripstastrophe.2 Ivynettle suggested in the comments on this post that I try getting parasitic mites to eat the thrips, that she had done so this year and had been pleased with the results.3

That didn't go very smoothly either, and is also expensive ($63.70, shipping included, for 50,000 mites.4), but it at least has the advantage of being something I haven't tried before. Imidacloprid doesn't seem to affect the thrips at all; white oil is cheap and somewhat effective, but also extremely messy, time-consuming, and the Anthuriums respond by dropping all their blooms, so I don't want to try that again unless I'm truly out of other options. Hand-picking is ludicrous, spraying with a non-imidacloprid insecticide (e.g. pyrethrin) is prohibitively expensive, giving up and living with the thrips is depressing,5 zero-tolerance for thrips infestation would end with all the seedlings in the garbage except one, and it would probably be a pink/pink. So this is something I can try. Even if it fails, as it almost surely will, doing something feels better than doing nothing.

With all that out of the way, then, let's talk about seedling 0586. The name assigned to her, "Vera Special," wound up being sort of a joke, because Vera is almost identical to 0580 "Marsha Marsha Marsha," and awfully similar to 0120 "Eliza Boutisecksis."

Which one is Vera? 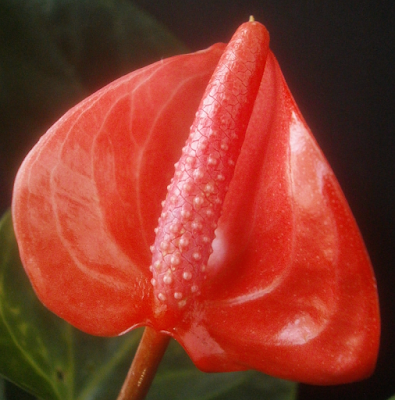 It was this one! (L-R in the first photo: 0120 "Eliza Boutisecksis," 0580 "Marsha Marsha Marsha," 0586 "Vera Special."
It happens to be a look I'm really fond of, and even if it weren't, I see orange so rarely that I'd be inclined to keep and cherish it even if it were terrible. But it's not terrible! Hooray! The spathe is a decent size, and so far doesn't seem to want to flip backward. Add in the color, and I think that easily puts Vera into the top 25% of all seedlings.

The leaves are also basically identical to Marsha's, which makes sense because Marsha and Vera were both divided from 0115 "Erlene Adopter," and are either clones or siblings.6 Marsha, Adam, and Vera have another thing in common, which is that they have all done this at some point: 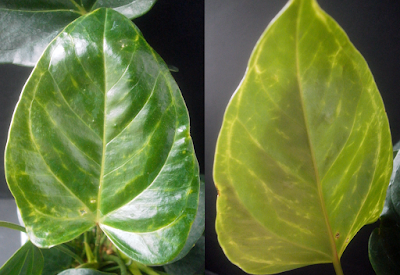 A weird 0586 leaf, by reflected (L) and transmitted (R) light.
Not all the leaves, or even most. Just a few per plant. In all three cases, it appeared basically overnight, I hadn't done anything any differently that I could remember, the leaves otherwise appear perfectly healthy, and it doesn't seem to be spreading or intensifying. I don't have any very satisfying theories about what's going on: it sort of resembles certain rare kinds of virus damage, and sort of resembles some kinds of fertilizer deficiency and mineral toxicity, but if it's fertilizer-related, then it's weird that of all the Anthuriums here, it's only affecting three very closely-related plants. I mean, they all get basically the same fertilizer, and I water heavily enough that anything toxic should all have been washed out of the soil long before the leaves changed colors. The coloration doesn't look much like most viruses I've seen, either. So I don't know what's going on.

The unaffected leaves are unremarkable. Nice when new, dull and kind of plain when older. Resistant to thrips damage, though, which is always nice. 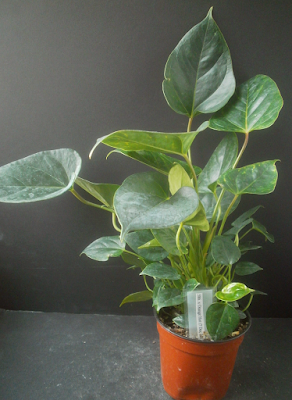 Like her relatives, Vera suckers thickly, another strongly positive trait. It remains to be seen whether Vera will be like her relatives in being impossible to pollinate. I don't know how many blooms have appeared and withered without any pollination on 0120 "Eliza Boutisecksis," but, like, several. And I haven't had any luck with 0580 "Marsha Marsha Marsha" either. I suppose sexual reproduction doesn't seem as urgent when you can make so many suckers.

So overall? Vera's not perfect, but she's a keeper. No question about it.


1 (I'm writing this on Friday August 21. It really was a pretty rough day, internetially speaking. Absolutely nothing worked the first time I tried it.)
2 Not to be confused with the scalepocalypse, or the miteaclysm.
I'm pretty sure I haven't mentioned the miteaclysm before, so:
The Anthuriums in the living room, i.e., the parent varieties of most of my Anthurium seedlings, have developed some kind of mite problem, though the mites in question don't appear to be spider mites. Or at least they're not particularly inclined to spin webs. I suppose they could still be really lazy spider mites. 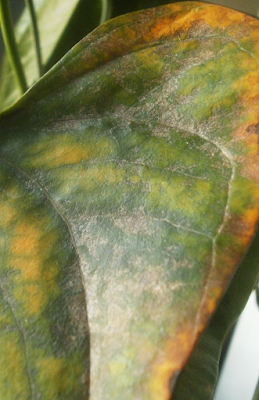 (on the NOID red)
I'm not super worried about the mites, which I figure will probably go away once the days get shorter and colder. (This has happened in previous years.) The predatory mites are also alleged to go after spider mites, so hypothetically, the predatory mites could kill two birds with one stone although come on how are you ever going to kill two birds with one stone unless the birds are like lying on the ground with one of them resting its head directly on top of the second bird's head and they're both holding perfectly still? And even then, if the birds saw you walk up with a stone they're not going to keep sitting like that, they're going to fly away, right? I question the whole premise of the idiom, is what I'm saying. (And don't even get me started on "the more the merrier." I mean, some of the "more" might be assholes! How's that going to make anybody happy? And how are you supposed to transport eggs if you don't put them all in one basket? Two baskets? That's not efficient at all! Do you even know how much baskets cost these days?)
Anyway. The point is, it's possible that the predatory mites could solve all kinds of problems for me, though at this point my best-case imaginary scenario is that they slow down the thrips, a little. Expecting more than that seems like a recipe for disappointment.
3 As did another reader, by e-mail, some time ago, though if I remember right they didn't claim to have tried predatory mites personally; they were just suggesting it as an option.
4 I cannot imagine how much it must suck to be the employee who has to count out 50,000 individual mites to put in the bottles. No wonder they're expensive: that must take weeks. And what tiny tweezers they must have to use!
5 At least in the short run. In theory, I could maybe breed thrips-resistant seedlings, given enough time, but the thrips reproduce so much faster than the Anthuriums that I suspect the thrips could come up with new attacks more effectively than the Anthuriums could come up with new defenses.
6 Erlene herself has never bloomed, but offsets thickly and has similar foliage, like Vera and Marsha, so it wouldn't surprise me if all three plants were genetically identical. A fourth plant divided off of Erlene, 0581 "Adam All," has similar foliage and produced an orange bud once, but Adam sucked at follow-through and hasn't tried again. Wouldn't be surprised if he were a clone also, though.
Erlene/Vera/Marsha/Adam are from sibling group AG (seed parent 'Orange Hot;' sow date 12/7/11). 0120 "Eliza Boutisecksis" is from sibling group AH ("Orange Hot" and 12/17/11), which is close enough in sow date that it's entirely possible that Eliza is a half- or full sibling of the others, but she's probably not a clone of any of them.
Posted by mr_subjunctive at 3:00 AM

Fingers crossed the mites work for you!

Have you asked the mite breeder how long after using imidacloprid you have to wait before introducing mites?

I didn't, but it was my understanding that arthropods don't have the enzyme that imidacloprid works on, so they shouldn't be affected.