This post is probably a little premature, since nothing has actually happened with these yet. But since I'm doing non-Anthurium posts sometimes now, I figured it was better to say something, and have this post to remind me later, than to say nothing and possibly forget about the whole business entirely. So.

What happened was, both the original Polyscias fruticosa of mine and a cutting I took from it decided to bloom this summer, which I wrote about in June. At the time, I wasn't sure whether they would be self-fertile or not, but it turns out that they are. So far, so good.

The berries are sort of grayish (previously); they vaguely resemble blueberries. 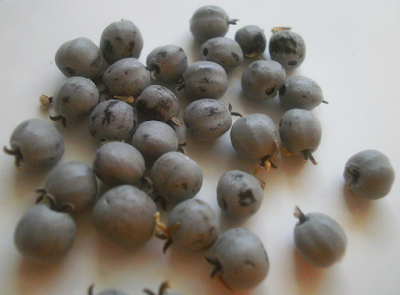 The resemblance gets a lot stronger when you crush them: 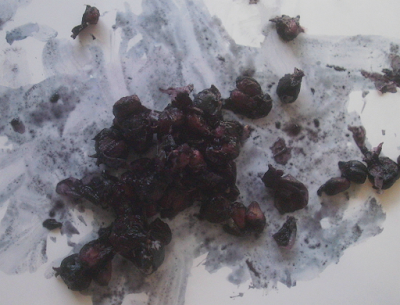 (Though, weirdly, the color in that photo is more or less accurate: the juice is dark purple until it soaks into the paper plate, or dries, or something. Then it turns basically gray. I don't know how many times I had to look at it over and over before I realized that the color was fading from the juice, not that I was losing the ability to see in color.)

At this point, I didn't know what one was supposed to do with the seeds in order to get them to germinate. Searching the internet was unhelpful, so I shrugged and did what I would do with Anthurium: how different could they be, right? So I cleaned them off as best as I could, stuck them in water to rinse and clean them further, 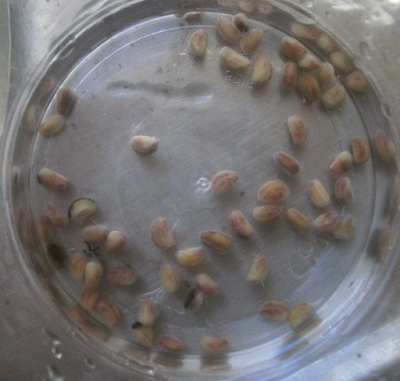 and then sowed them on damp vermiculite in a clear plastic container. If a batch of Anthurium seeds intends to germinate, they'll usually have done something within about 10-14 days; the Polyscias seeds have, as of 15 October, been doing nothing at all for 19 days now. This is hardly enough evidence to conclude that they're duds -- in the same situation, Spathiphyllum seeds treated the same way will germinate immediately, after six months, and all time spans in between, and Schlumbergeras will germinate in nearly-perfect unison after about 3-5 weeks. So the Polyscias seeds might be fine.

Well. I notice a handful have some fungus on them. Those ones aren't fine, obviously.

But so we'll see how that goes. If this doesn't work, I think there are more fruits still on the original plant, so I have the option to take a new batch and let them dry overnight before sowing, and see if that works any better. Or just forget about it, which might be the best thing: I just started like 1500 Schlumbergera seeds;1 more seedlings surely won't be helpful.


1 From 'Exotic Dancer,' plus five of my own seedlings: 088A "Cyborg Unicorn," 082A "Strawberry Madeleine," 023A "Stoked," 026A "Brick Wall," and 057A "Pyrotechnic."
Which reminds me: soon Schlumbergera seedling posts will start showing up instead of / in addition to the Anthurium seedling posts. Already got a few previously-unbloomed Schlumbergera seedlings with buds on them (so far: 018, 034, 056, 103, 106, 107), and there's a chance that 083A "Psychedelic Bunny" might finally be blooming as well. If it is, I could possibly take cuttings and have "Psychedelic Bunny" available next year. I mean, possibly not, too. I still go back and forth about whether I want to try patenting it first. But the first step in doing any of those things would be to know which of the plants in pot #083 is "Psychedelic Bunny," so here's hoping I can find out.
Posted by mr_subjunctive at 3:00 AM

Its Wiki page talks about the benefits of the leaves and roots, but doesn't mention whether the berries are edible. Have you been brave enough to try tasting one?

mr_subjunctive
Mr_Subjunctive used to work at a family-owned greenhouse / garden center in Iowa City, IA. As of 21 January 2020, he has 1365 houseplants, which is too damn many. Most are Schlumbergeras.