As October rumbles along, I'm getting more and more excited about the Schlumbergeras. Sixteen previously-unbloomed seedlings have buds now,1 and most of the plants that had bloomed previously also have buds. It looks like the first bloom this year will be from 082A "Strawberry Madeleine." Which is a fine seedling to begin the season with, and this pleases me.

I've also moved some of the more vigorous 3-inch seedlings to the plant room (the only place in the house where the temperature and day-length requirements can be met), in hopes that some of them might flower. It'd be early: they were sown on 23 February 2014, which makes them about 20 months old now. But it's possible (025 "Clownfish" made its first bloom at 19 months), and if they flower, I should have a much wider range of bloom colors this year.2

I'm also a little excited about some of the repeats from last year, because I should finally be able to answer some lingering questions. Does 030A "Diwali" always stop just short of opening its flowers, or was it just having a tough time last year? (Can 113A "Helper Dog" ever stop opening its flowers? It'd be worth growing, if it would just relax its petals a little.) Can 054A "Helpful Gesture" produce more than one bloom in a year? Will I ever be able to take cuttings from 083A "Psychedelic Bunny?" Are 008A "Frightened Dog" and 008B "Candor" actually the same seedling?

So there's a lot to look forward to, with the Schlumbergeras. In contrast, I'm . . . well, I'm getting sick of the Anthuriums lately. 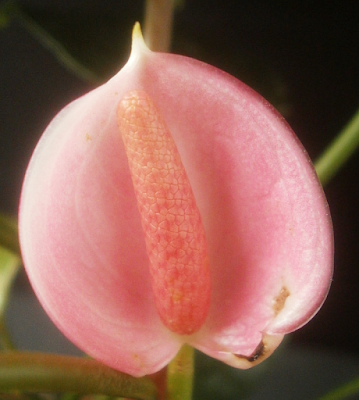 The timing makes me feel bad, because Denise is okay. This first bloom has a pretty tiny spathe, and it's pink. Now that I think about it, those are both strikes against her, though.

Well, and then there are the brown spots, which I assume are probably thrips-related.

I think I'm talking myself out of "okay," actually. I mean, the leaves are somewhere between yuck and meh, closer to meh: 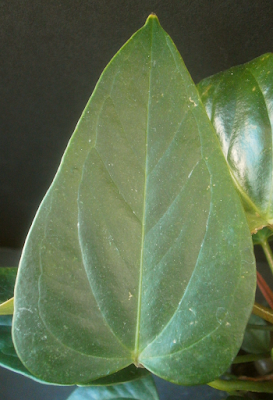 And the plant as a whole distinguishes itself mainly by being smallish, like the bloom. 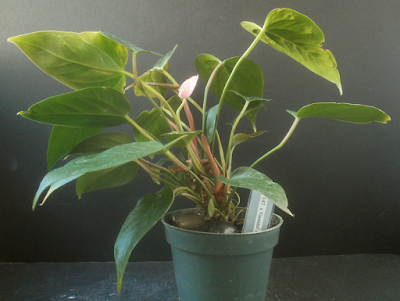 So yeah. Actually Denise isn't great. She photographs pretty well (it helps that the spadix is slightly yellow-orange, instead of the more common darker pink), and she could be worse, but she's not great. 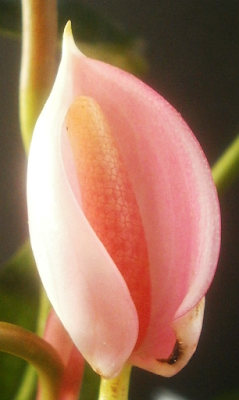 So probably not a keeper. I don't know. I shouldn't make decisions about the Anthuriums when I'm angry at them.

The next Anthurium (0380 "Ewan Watarmi") makes me a lot happier, though, so how about we forget about Denise and meet back here on Sunday?

P.S. I think I'm done with the daily posts for a while -- fun though they were, it was a lot of work to keep up with them, and I'm pretty much out of events to celebrate for the moment anyway.


1 All 16 pending new blooms: 018, 033, 034, 056, 074, 077, 089, 093, 100, 102, 103, 105, 106, 107, 112, and 114.
2 I believe that all (or at least most) of the seedlings to have bloomed so far were probably the result of a 'Caribbean Dancer' x NOID peach cross. In all cases, 'Caribbean Dancer' was the seed parent, so that part's pretty easy to pin down, but also most of the orange and orange-pink blooms could be explained by the orange pigment from the NOID peach being expressed at the intensity of the red pigment in 'Caribbean Dancer,' plus a variable amount of the magenta pigment from 'Caribbean Dancer' near the petal bases. And it doesn't hurt that one seedling closely resembles the NOID peach. (061A "Leather Fairy")
The 3-inch plants I just moved have both 'Caribbean Dancer' and the NOID peach as seed parents, plus two others: the NOID white and NOID magenta. So there are five more possible crosses. ('Caribbean Dancer' x white, 'Caribbean Dancer' x magenta, white x peach, white x magenta, peach x magenta) I'm not expecting a lot from one of those (white x peach seems like it could only lead to really light peach, which is tough to get enthused about), but surely we'll see something new from the other crosses.
3 If you're just now joining the program: I'm trying to use adhesive tape as a pest-control method, by sticking it firmly to plants' leaves and then pulling it away, which when done correctly can result in scale and thrips getting pulled off of the leaves too, even if they're too small to see. It is not likely to be effective, and I don't recommend it, but I ran out of actual ideas a while ago.
Posted by mr_subjunctive at 3:00 AM

Will you be selling Schlumbergeras again? Pretty please? I missed my last opportunity to purchase...

Yes. Or at least I assume I will; I don't know why I wouldn't. (Likely the ones that were available in July, plus any interesting new ones from this year that I manage to start cuttings of.)

Yikes, had I been here in October I'd have told you to be way stricter in culling the plants... and I guess I'll still be saying that because somehow (mystery!) I have a feeling you might still not be very strict...

So here's a pep-talk for discarding with a heavier hand.

No mercy for seedlings that have nothing going on for them! If best they can give you is "okay I guess"—nothing outstanding, nothing exciting, nothing new, nothing of particular value—then they're clearly not paying for their place, only draining your resources -- space, pots, air moisture, light, oxygen and C2O, water, feed, and your precious time and effort in providing care, fighting pests, and keeping tabs.

We've seen a lot of Anthurium babies at this point (I'm reading these in chronological order) and clearly getting good ones is a matter of breeding a lot (i.e. to maximize the tickets for the grand Anthurium Lottery) and going through a lot (to see if any one ticket has a win).

In any case, you do you, and sorry if this came off as obnoxious. Here's one reader who's inspired by your persistence and hard work!

1) Any time a seedling dies, there's a bunch of "paperwork" (updating spreadsheets, mostly) that goes along with that, and if I get rid of too many at once, it can take up a surprising amount of time. (E.g. I threw out 59 seedlings yesterday, and it took me an hour and 50 minutes to get everything squared away. That's unusual -- I burned a lot of time trying to figure out why my records said seedling 0910 was dead and 0911 was alive, when 0910 was on the shelf and 0911 wasn't -- but you get the idea.) So sometimes I keep plants longer than I should just because it's a bigger pain in the ass to throw them out.

2) Seedlings do sometimes change: seedlings with bad foliage can get better, seedlings with a crappy first bloom sometimes make a better second bloom, seedlings with a couple scale insects can sometimes be cleaned up. So if there's anything interesting or appealing about a seedling, my first impulse is to give it a little while longer to prove itself, which I think is what happened with Denise here. (She has since been culled, by the way, due to bugs.) It doesn't happen that often, but it happens often enough.

3) I'm also hesitant to get rid of seedlings because, crappy or not, each is a unique combination of genes, and I only have just so many founding varieties, some of which are lost forever ('Midori'), and some of which are so reluctant to bloom that they may as well be lost forever ('Peppermint Gemini,' NOID purple). Since I don't know the pollen parents on any of these, there's always that chance that it might be The One that could give me something interesting in the F2 generation. Nothing like this has happened yet, but then I haven't yet seen any full blooms from any of the F2 seedlings either.

I think ultimately this will be a self-solving problem; I only have so much room, and the standards have to rise as the available spots get more competitive. (I already throw plants out that I wouldn't have thrown out two years ago.) Basically, I'm as strict as I need to be in order to maintain the number of seedlings at about 700.

And no, not obnoxious. I already think about this stuff a lot, obviously.