Ewan is sort of familiar-looking: a very dark red, along the lines of 0002 "Alexis Mateo" or 0005 "Chad Michaels." I've had mixed luck with both of them. Chad produced a bunch of seeds in August 2014 and then appears to have suffered some kind of root rot, from which he hasn't yet come back. I'm starting to think he never will.

Alexis is doing better; she bloomed once semi-recently, though the bloom was small, and she made a new leaf that was amazing and gorgeous (Alexis has always had the prettiest leaves), but that's not a huge list of accomplishments, really. As old as Alexis is (sow date 18 July 2011, so more than four years old now), she should be a lot larger and better developed than this.

The point being that I'm still looking for a halfway decent dark red. And Ewan might be the one. 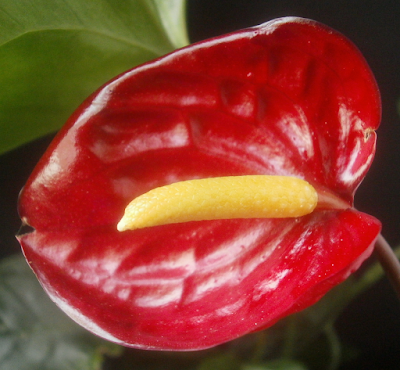 Photo: 27 September 2015.
As with the other dark reds, the camera seems to assume that it's a regular red, and adjusts the color balance accordingly. But you can still see that it's got some nice blistering,1 and although I've seen thrips on this bloom, they don't seem to be scarring the spathe significantly. Or if they are, it's hard to see. There's maybe a minor problem with the spathe tearing -- you can see some rips on the far left and far right of the above picture -- but it's only the first bloom, too. Could be a fluke.

Ewan's part of the "social science clique,"2 and has large, nice leaves, like most of them:3 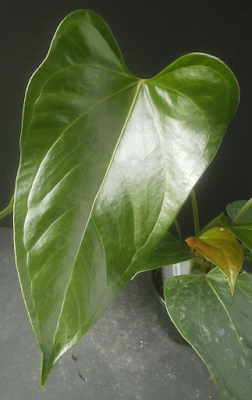 And the plant as a whole is pretty nice. 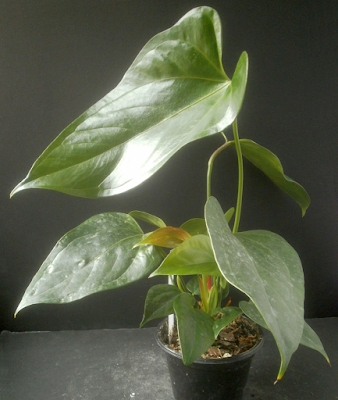 The blooms have gotten darker with age, which the camera refuses to acknowledge but I swear it's happening. 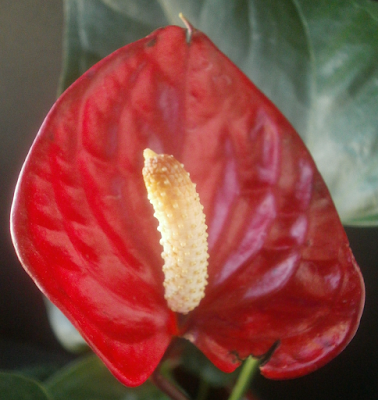 Photo: 22 October 2015.
My guess is that the red pigment is not getting more intense, it's that the small amount of green pigment is increasing. I'm mainly basing that on the observations that it's normal for red pigment to stay at about the same concentration, and it's at least not unusual for green pigment to intensify. (Some of the pink-blooming plants wind up more green than pink by the time the berries are ready to pull off. 0220 "Nora Morse" in particular winds up kind of a muddy pink-green-brown mess, but in a way I find unexpectedly pleasant.)

Anyway. I'll move Ewan to a 6-inch pot as soon as I can: even with the torn spathes, he's better than the last several blooms, and I think there's a good chance that the torn spathes will stop.


1 I haven't mentioned blistering in more than a year, apparently, but the term refers to spathes with a sort of lumpy, quilted texture to them, where the larger veins in the spathe are raised relative to the rest of the spathe. It's considered a desirable trait for cut flowers, though I suspect that's because blistering only shows up well on large blooms, and large is a desirable trait for cut flowers. The best blistering I've gotten from any of the seedlings so far is probably with 0231 "Rhea Listick:" 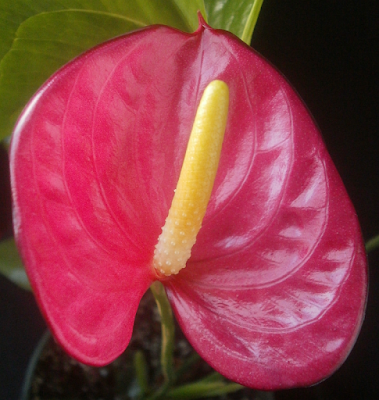 2 The seedlings with numbers between 357 and 371, and 375 to 385, so named from the Dewey Decimal System. This turns out to be the same thing as saying, plants from seedling groups AZ and BA (Seed parent 'Gemini,' and sow dates from March 7 to 18, 2013). I'm all but certain that the pollen parent was the NOID red for both groups.
The other clique members to bloom so far are: 0357 "Rhea Litré," 0360 "Heidi Gosique," 0361 "Willam Belli," 0362 "Dennis Office,", 0365 "Murray Hill,", and 0371 "Deb Autry." The sibling resemblance is a lot stronger with AZ/BA than with many of the other sibling groups, which I'm taking as further evidence that they probably all have the same pollen parent.
3 I wouldn't say 0362 "Dennis Office" has especially nice leaves, but the others in the group are all at least above average. 0357 "Rhea Litré" and 0360 "Heidi Gosique" both have incredible leaves.
Posted by mr_subjunctive at 3:00 AM

I suspect that blistering is desirable in cut flowers because it brings out multiple shades out of the large single-colour spathe, i.e. added visual interest.