Elvis is the fourth seedling from the AX seedling group (seed parent: NOID red; sow date: 9 November 2012) to bloom, and as predicted, she doesn't resemble the other three any more than they resemble one another. In fact, if anything, she looks like the odd one out: they're at least all sort of orange, with spadices that are sort of beige, and none of them flip their spathes backward. 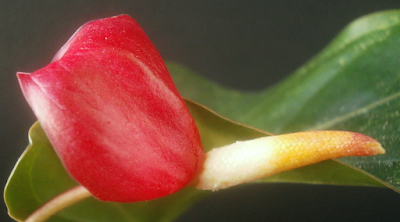 0331 "Elvis Herselvis." And keep in mind that this was the best picture I managed to get.

The other AX seedlings to have bloomed so far. Top to bottom: 0328 "Polly Esther Blend," 0329 "Gladys Panzarov," 0330 "Faye Quinette."
Elvis's foliage is pretty nice, strongly resembling her mother's. Which is sort of too bad: it would maybe be worth keeping the plant around for the leaves, if the blooms were at all attractive. 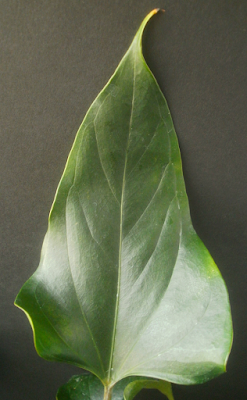 Elvis also doesn't offset much, and doesn't have an especially large number of leaves. 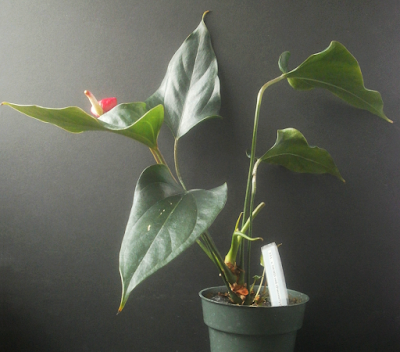 So she's probably destined for the landfill, the only question remaining being how soon.

The reader will maybe have noticed by now that there's a sort of pattern to these Anthurium seedling posts, that about one out of every four or five seedlings will be laughably terrible, an equivalent number will be novel or impressive enough for me to want to keep it, and the remainder will be in between: not especially pleasant, but also not obviously headed for the discard pile. That's how things have gone for most of the time I've been doing this,1 so it's not new, but I mention it because I'm sort of surprised at how consistent it's been. Ordinarily, with something like this, I'd try to schedule the posts so that you didn't wind up having to wait too long between decent blooms, but I haven't needed to do that: the Anthuriums have been doing their own scheduling for a while now (i.e., I schedule the posts in the order that new blooms appear), and the result has been pretty much the same.

That said, I'm getting really excited about the upcoming switchover to Schlumbergera seedling posts.2 Schlumbergera season officially began here on 25 October, when the NOID yellow produced the first bloom of the year, 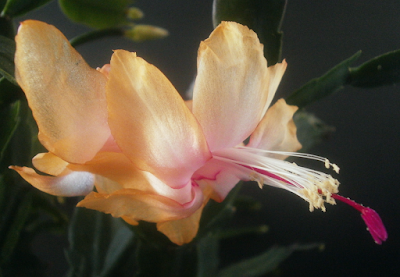 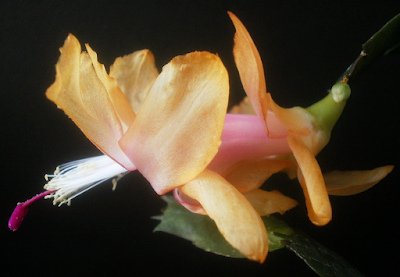 and as I write on 28 October, 'Caribbean Dancer' and the NOID white have joined the party as well.

My seedlings haven't bloomed yet; it looks like it's neck and neck between 082A "Strawberry Madeleine" and 018A (unnamed) to be the first bud to open. There are now 21 previously-unbloomed Schlumbergeras with buds on them: every plant I moved to a 4-inch pot last year is budding this year save four: 062, 072, 104, and 111A "Morning Sun." None of the 3-inch plants I mentioned on 23 October have tried to bud yet either, as far as I've seen. Plenty of time for that to change, though. And even if some of the seedlings never do bloom, enough of them are budding that the plant room is going to look totally amazeballs when they're at their peak.


1 Though the obviously-crappy seedlings are becoming slightly more common, and the impressive seedlings are becoming slightly less common. Part of this is that seedlings have to do more in order to stand out as superior, since so many plants have bloomed already; there's also some reason to think that the group that's matured most recently may be genetically subpar. So it's a little bit subjective, and it's a little objective.
2 The Anthuriums will keep appearing as long as they keep blooming; I just figure they'll be so outnumbered by Schlumbergeras that the latter will basically take over for a few weeks.
Posted by mr_subjunctive at 3:00 AM

What a pretty Schlumbergera! I love the yellow and violet combination.

Amazeballs? That caught my eye…but truly my envy of your Schlumbergera is sinful.

It's a thing. Not ordinarily something I would say, but we'd just been watching American Horror Story and one of the characters says it.[1][2] Kinda stuck in my head.

Yellow Schlumbergeras are out there, though around here I think I've only ever seen them at independent garden centers. I like having a wider range of colors to breed with, and if you like it, it's definitely worth keeping an eye out for one around this time of year, but but the color isn't as stable (I've seen at least one case of a yellow plant producing a branch that bloomed magenta) and the plants are a little fussier. I lost about half of my plant to rot a couple years ago; I didn't lose it entirely, because I managed to salvage some cuttings, but it's not super-robust.

[1] About the band Toto, no less.
[2] Do I recommend American Horror Story? Well, I enjoyed the first couple seasons, and I'm liking what we've watched of the fourth so far (through ep. 4). The second season was even arguably good, though YMMV.
The third season was terriballs, though, and I couldn't recommend it to anyone in good conscience. Everything Frances Conroy did was perfect, and Kathy Bates got one amazing moment (LIES!), but the rest of it was tedious and badly-written and didn't even work as campy and absurd, which is how I had been enjoying seasons 1 and 2.

Welp, now I've seen everything. Elvis is clearly sulking behind a leaf and flipping you off in that photo! What a bratty plant...