Just in case you were under the impression that drag kings were a new thing, Hetty King (born Winifred Emms) was performing as a male impersonator before World War I. She even got decently famous at it, along with several other male impersonators from around that time (two of the bigger names being Vesta Tilley and Ella Shields). I mean, male impersonation then didn't mean quite the same thing that drag kings do now, obviously, but it's clearly in the same neighborhood, and I don't get the impression that it was considered particularly shocking and immoral. At least no more shocking and immoral than the music halls they would have been performing in, anyway.

Shamefully, I didn't do as much research into King as I probably should have if I'm going to talk about her.1 But there's a nice long article/interview with King here, and YouTube has some relevant videos as well.

Hetty King's seedling namesake is, alas, much less interesting. She's yet another in a long line of LPAs,2 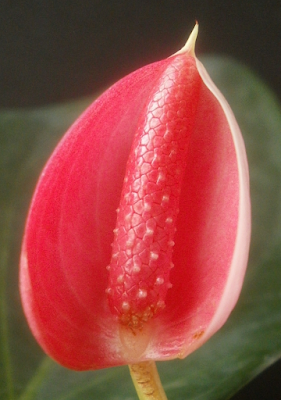 and although the foliage is pretty nice, 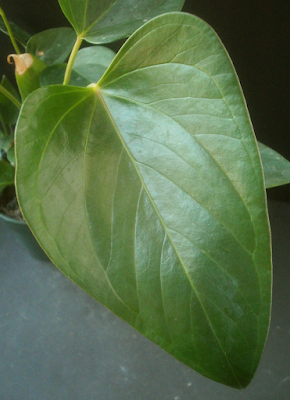 the only notable thing about her, really, is that she produced a second bud really quickly. Lots of pent-up blooming energy, perhaps: she was 39 months old before making a first bloom.3 The overall plant is fine, 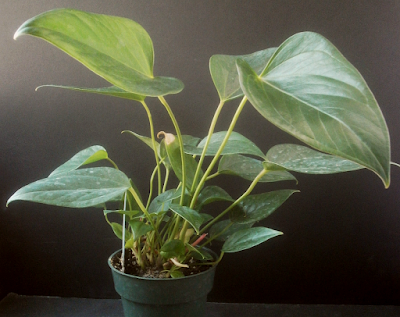 but the spathe flipped backward after opening, and I have plenty of pink/pink Anthuriums already. Hetty's not so terrible that I need to go out of my way to discard her, but she's not so good that I'm going to feel bad when I eventually do.


1 What with watering, trying to blog every day, Anthurium-taping, e-mail, trying to sell plants on Craigslist, trying to make sure Sheba takes her Benadryl every morning, getting pictures of the plants and sorting through them, and physical therapy exercises, I've been perpetually exhausted.
Notes and explanations:
• trying to sell plants on Craigslist hasn't actually resulted in any sales yet. It almost never does. Craigslist is the worst. Sadly, it's also the only. So I keep trying.
• Sheba's been chewing holes in her fur, especially the fur on her feet. We think this is probably an allergy (it's happened in other years; also my allergies have been acting up intermittently during the same period), and giving her Benadryl twice a day, and spraying her feet with a lidocaine-based spray, seem to keep it under control better than anything else we've tried, but she doesn't actually like the Benadryl or the spray, so it's a little bit of a hassle to administer them, and they aren't able to stop her from doing it altogether, just enough to keep her from chewing actual wounds into her skin.
• I have been having trouble with my right shoulder, off and on, since the spring, which got bad enough that I saw a doctor about it a month ago. Got a referral to a physical therapist, who I like and who I believe knows what she's talking about, but she gave me exercises and stretches to do twice a day, which was tough to fit into my schedule but I (mostly) kept up with.
Then at the follow-up appointment, it turned out that I had been doing the exercises mostly wrong, partly because I was finding it so difficult to fit them into my day that I was trying to rush through them, taking shortcuts, etc. My shoulder got somewhat better anyway, but an elbow started hurting instead, so the only thing I accomplished was moving the pain from one joint to another.
And then the physical therapist, at the follow-up, assigned me a set of new exercises that take just as long to do as the old exercises did, plus I'm supposed to continue the old exercises. The one time I attempted to do all six things, I was trying to work out before watering plants, so I was in a hurry, and even though the correct way to do the exercises had been clarified for me at the follow-up, I was doing doing them all wrong anyway, and could tell I was doing them all wrong, but got frustrated with myself for not being able to do them right, and the whole situation was miserable. So, as I write this (26 October), I've more or less decided that I prefer the shoulder pain to the exercises, and I've stopped doing them entirely, which is obviously not a mature or productive reaction to the situation and will certainly not make anything better. But so my point is that time I might have spent researching early-20th-century male impersonators has been going toward hurting myself with poorly-performed exercises instead. For which I am doubly sorry.
2 (= Little Pink Anthuriums)
3 The average length of time from sow date to first bud continues to increase, as some of the earliest seedlings get around to making buds, but it's still around the two-year mark. The mean is 28.5 months, and the median is 27.2 months. 39 months is really late, though the record at the moment for the latest bud belongs to 0045 "Lineysha Sparx," who finally produced a bud, after 47 months, and then dropped it.
Posted by mr_subjunctive at 3:00 AM

In my experience physical therapists ALWAYS assign too much work to do [I have very bad joints and have gone to PT for of different injuries]. I've had them assign HOURS of exercises to do daily at home. Uh, guys, I have other things I have to fit into my busy day as well.

While it might be ideal to do the WHOLE set of exercises I find just doing one or two a day help out. It just takes longer.

Or, you know, just make your husband do all the heavy lifting. That works, too. Until he injures himself....

No need to post this.
A couple of Chiropractors were the answer for my shoulder, elbow, wrist, neck pain.
The Chiropractor I now visit, specializes in sports medicine and is even visited by M.D.'s. I usually visit him several times until I'm good to go. Since I mostly pay out of pocket, fewer treatments required is a plus. He is not a "Twist and Crack" type and I always feel better after a session with him. He uses heat, massage, a TENS unit and whatever else is needed to relax the muscles before the adjustment.
For the last few years he has been using a computerize machine, which can visualize the area which is out of alignment. It has an attachment, with which he can "ping" the offending areas. It sounds like a tiny jackhammer but doesn't hurt. The computer stops the attachment when alignment has been achieved. It's kind of like a computerized activator.
My first Chiropractor used the Activator method, which was effective. She had me coming back multiple times.
When I moved out of the area, I was referred, by a friend, to my present chiropractor.
Hope you can get a referral to a good one.