A bit of an emotional roller coaster with this one. The bud was a bit purple, which excited me so much that I moved Isaiah up to a 6-inch pot before seeing the finished bloom. And then the bloom eventually did open, and it was underwhelmingly red. 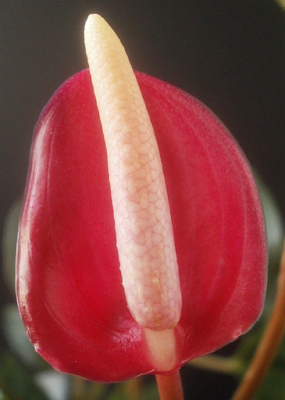 I'd been expecting a color closer to that of 0386 "Violet Chachki," given the color of the bud. It was also a pretty small bloom. So then I was upset with myself for having wasted a 6-inch spot on such an ordinary seedling.

But. A couple days later, it actually had gotten a little more purple.1 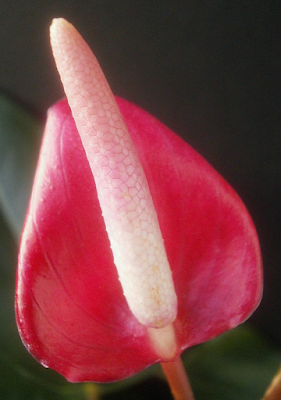 And I noticed that the spadix had gotten a little more purple as well. Purple enough to look sort of familiar. Where had I seen that combination of pale yellow and pale purple before? Eventually it hit me: 'Krypton!' 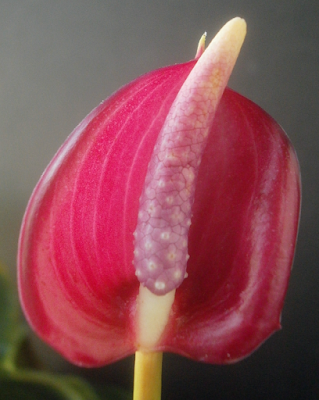 ('Krypton')
For some reason, 'Krypton' has been a difficult seed parent. It blooms sporadically. When it does bloom, it's difficult to pollinate. When pollinated, it doesn't produce many seeds. When it does produce seeds, they tend not to germinate, and the seeds that do germinate tend to either die or remain small. I don't have numbers for the number of blooms, seed production, and germination; I just know that I've been frustrated by this for a long time.2

But Isaiah changes things a little. I'd suspected for a while that even if 'Krypton' was difficult to pollinate, it was still at least producing pollen. This is the first indication I've gotten that that could be correct.3

Not that 'Krypton' is so special that its genes need to be preserved at all cost -- it's fine, but it doesn't bloom a lot, and the blooms are small -- I'm just more likely to see unusual things if I have a larger genetic pool to play around with. So this is encouraging.4

As far as Isaiah goes, his leaves and overall shape are decent: a little leaf damage from thrips or whatever here and there, but it's fine. The spathe itself is surprisingly blemish-free. 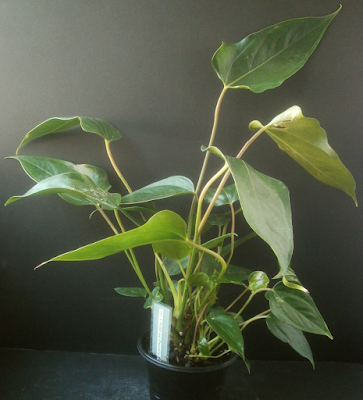 So. Given the opportunity to do it all over again, I'd probably still move Isaiah up to a 6-inch pot. He's a keeper. And as I get used to him, I'm finding him easier to appreciate. Everything's worked out fine. But I really should stop moving plants up before they've even bloomed.


1 Some of the difference between the photos is due to my not getting exactly the same color balance, which is pretty obvious when you compare the backgrounds. The color change really did happen, though.
2 I can tell you that I've only ever managed to pot up seven seedlings from 'Krypton,' only three of which survive, and only one survivor (0599 "Butta") has been robust enough to move to a 4-inch pot. And "Butta" is actually the smallest 4-inch plant in its flat.
3 (Isaiah's seed parent, incidentally, is the NOID red. He's a sibling of 0334 "Jean Poole," who is so much larger and oranger that I'm guessing they're only half-siblings. Though Jean's spadix is also a little on the purple side, so you never know.)
4 It's still probably the case that 'Gemini,' 'White Gemini,' and the NOID red make up the bulk of the seedlings' genes: they're all extraordinarily good at catching pollen, and the NOID red is also good at shedding pollen. I don't have hard data on it, because I don't know who the pollen parents are for my seedlings, but I would estimate that 'Gemini,' 'White Gemini,' and the NOID red combined have probably contributed 75% of the seedlings' genes, with the remaining 25% from 'Orange Hot,' the NOID purple, 'Pandola,' 'Krypton,' 'Peppermint Gemini,' 'Joli,' the NOID green/pink, 'Midori,' NOID pink, NOID red-violet, and 'Red Hot' combined.
Posted by mr_subjunctive at 3:00 AM