Nothing huge going on with the Polyscias seedlings exactly, but I thought learning a little bit more about how Polyscias works was maybe worth a post.

As of 10 November, 13 seeds have germinated (out of 53 sown). The first has already begun to produce true leaves, though they're not easy to see in this photo: 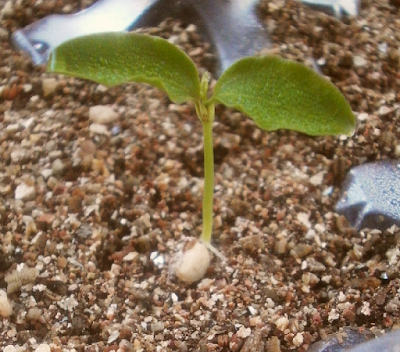 Maybe three or four others have visible cotyledons ("seed leaves"). There's still a ways to go before I can officially say that I've grown Polyscias fruticosa from seed -- the next hurdle will be transplanting to soil -- but I never anticipated getting this far with it, so even if no plants actually result, I think this is technically still a success.

For various reasons, it might be better if the seedlings fail to transplant. I was in the husband's office a few days ago, telling him that I had had nine Polyscias seeds germinate already, and he was all, cool, that's neat about it. And then as I was saying something else, can't remember what, I saw his eyes drift over to the parent Polyscias -- by now approximately 6 feet tall and 2 feet wide (2 m x 0.7 m) -- and he interrupted me. "You said nine? There are nine?"

"You said nine? There are nine?"

LOL! That makes for a very comical mental picture. Obviously he was only half listening to you. Hilarious when the full import finally registers! (Also nice that he apparently is learning what some of the plants are!) Might be wiser not to update him should anymore sprout.

The one I got from you is going to need cut back (though it is only about 1.5ft tall ... it's looking "twiggy" in its pot and I have no intention of potting up). Nervous about trying to root the cutting. Been years since I last tried such a thing with one, and that was a dismal failure....

I've had close to 100% success rooting cuttings in a closed glass container with about 2 inches of damp vermiculite at the bottom; the variegated Polyscias never worked (I tried maybe 3 or 4 times), but I'm 1 for 1 on the species, and something like 80-90% successful with 'Elegans.'