So do you miss the Anthuriums yet? 'Cause I can (finally!) accommodate that. Meet Bob. 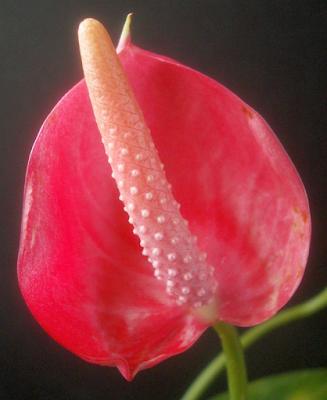 Bob currently holds the record for the latest full bloom; he was sown on 18 November 2011, and produced his first bud 46 months (nearly four years!) later, on 29 September 2015. This isn't the record for the longest sow-to-bud time,1 but it's close. 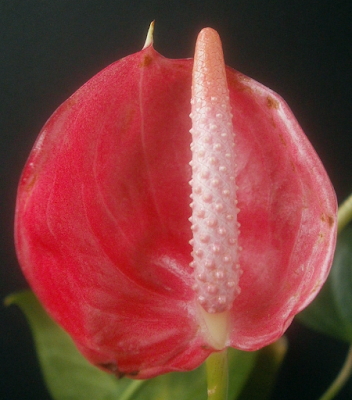 Was it worth the wait? Well, no. Not really. You can see the thrips haven't left him alone, and this pink-red color isn't anything new either. I have, nevertheless, moved him up to a 6-inch pot, because:

• A new shelf became available, following another Anthurium purge, so there was room.2
• Bob's spathe is substantially larger than standard,3 and seems especially large in comparison to the other recent Anthuriums.4
• The color is somewhere in between pink/pink (boring) and red/pink (interesting), which rounds up to interesting.

The leaves have fared a little better against the thrips than the spathe did: 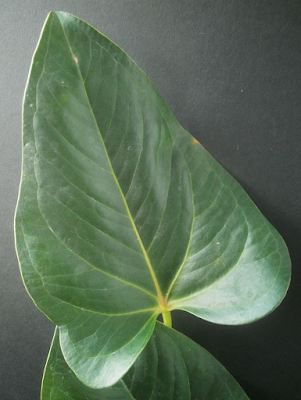 The plant as a whole is difficult to photograph well, because the petioles and peduncles are both long. The internodal distance concerns me a little, but the plant's four years old; it's earned a long stem. 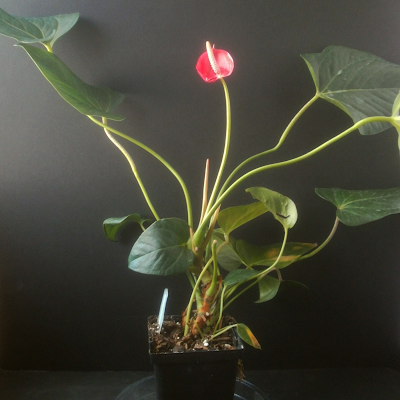 (Photo is before the move to a 6-inch pot. This pot is 4 inches / 10 cm, measured on the diagonal.)
So, I'm not saying Bob's one of the top tier of Anthurium seedlings or anything,5 but he's fine. We'll see how things go.


1 That record belongs to 0045 "Lineysha Sparx," at 47 months: 1 October 2011 to 24 August 2015. Lineysha, however, has aborted her one bud so far, and doesn't appear inclined to try again. Since I get to set the rules, I've decreed that first buds only count when there's eventually a bloom.
(Ideally, I would be tracking the opening of the first flower, not the appearance of the first bud, but this is harder to pin down to a particular date, as some buds take a long time to open. At what point is the spathe officially "open?" With "first spotting of a bud," the signal is a lot less ambiguous: either one sees a bud, or one does not. The solution would probably be to make "when you can tell what color the spadix is" the point when a bloom is officially open, but it's probably too late to change.)
Also: 0115 "Erlene Adopter" will be tied with Bob at 46 months, if/when she ever opens the bud she's working on currently. As I write this on 3 December, it seems likely that she'll complete the bloom, but it ain't over 'til it's over.
2 Also promoted: 0335 "Donna Fanuday," 0314 "Camille Yen," and 0264 "Trey Lerpark."
Donna's still producing blooms on short peduncles -- that's apparently just how she rolls. The thrips leave her blooms alone, though, and the spathes are a good size and color. Maybe she has novelty value and could be useful in breeding. Or something.
I kind of always wanted to up-pot Camille, just because of her unusually large leaves. The blooms aren't anything special, but sometimes having interesting foliage is enough.
Trey wasn't impressive at all in his first appearance, but he's done better than most at blooming multiple times in reduced light, and holding on to blooms for a long time, which both seem like good traits to have.
3 I know the seed parent is 'Gemini,' which doesn't usually produce blooms this size, but 'Pandola' does. 'Pandola' might also account for the hint of orange on the spadix -- the other candidate for pollen parent, the NOID pink, sticks to pink or purple-pink spadices as far as I've seen.
4 I.e., 0408 "Tex Messich," 0406 "Tricia Nullmaritch," 0532 "Amber Alert,", the five seedlings with upcoming posts (0424 "Jen Antonic," 0527 "Mrs. Lucia Love," 0547 "Cate Sedia," 0537 "Bridgette of Madison County," and 0516 "Brooke Enhart"), and most of the last few months of blooms, actually, now that I think about it. The last Anthurium seedling to produce a bloom anywhere close to this size was 0380 "Ewan Watarmi," and that happened in September.
5 As I write this (3 December), 121 seedlings have produced full blooms. I don't have an actual ranked list sitting around, but if I were to name the best 12 (10%) of seedlings off the top of my head, in no particular order, I'd say:
• 0330 "Faye Quinette"
• 0200 "Mario Speedwagon"
• 0276 "Zach Religious"
• 0234 "Ross Koz"
• 0334 "Jean Poole"
• 0031 "Sylvester"
• 0231 "Rhea Listick"
• 0596 "Alisa Summers"
• 0275 "Yvette Horizon"
• 0108 "Deena Sequins"
• either 0580 "Marsha Marsha Marsha" or 0586 "Vera Special" (they're more or less interchangeable), and
• 0357 "Rhea Litre,"
because, taken as a group, they have the best combinations of bloom color/size/frequency, thrips resistance, overall compactness, and attractive foliage. Though the list would probably be a little different the next time you asked.
Posted by mr_subjunctive at 3:00 AM