056A has been exceptionally difficult to name. TinEye gave me 31 options, and I found problems with all of them.1 Fortunately, I have a list of emergency seedling names, which (mostly) don't come from TinEye,2 from which I selected _________ that seemed to fit this seedling well enough, and we'll try to make one of them work. The full emergency names list has 86 names on it; I brought that down to 15. Which is a lot, I know, but I'll try to make it quick.

The main distinguishing feature of 056A is that it's very severe: the color is intense, the petals are flexed back hard, the dividing line between the dark orange petals and the pale pink tube is sharp.

Torchy and Make-Out City seemed cleverer when I first put them on the list. So never mind. Rampage is a little generic, or something. Voladora (Spanish: "flying") is pleasant to say, but I'm not sure the meaning lines up properly. 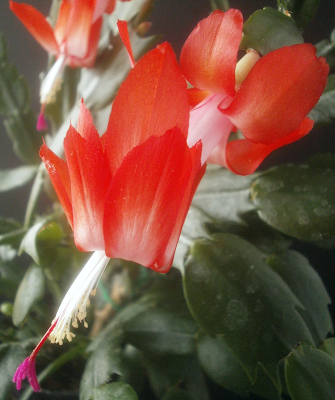 Pants on Fire certainly nails the color well enough, but I don't think the seedling is dishonest enough to warrant the name. Accipiter (the name for a group of birds of prey, the sparrowhawks and goshawks) gets the shape more or less right (if you squint and tip your head slightly to the side, it could be a hawk diving at something, blurry with speed), but I don't like the sound of the word very well. Molly Ivins absolutely deserves a seedling someday, and it'd make sense for the seedling to be orange, like her hair, but Ivins' hair was never this orange, nor did she seem particularly severe. 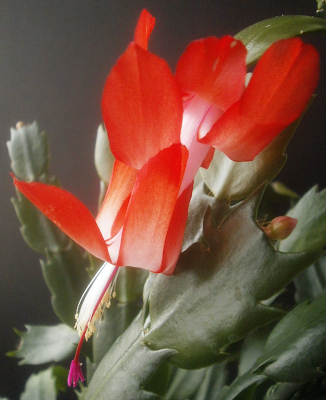 And now we're at the point where I like all the remaining options and have to make up things to find fault with, so I can narrow the field to one winner. Meteor Storm gets the shape right, again, but I just don't like it as well as some of the remaining options. Sun and Snow gets the color right, but ditto. Gato del Sol (Spanish, "sun cat" / "cat of the sun") amuses me tremendously, but is perhaps too funny for such a serious-looking seedling. 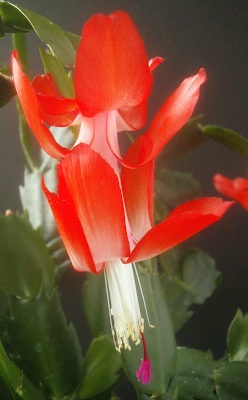 The remaining five are all fire- or heat-related, though sometimes very loosely so:

• Demons Begone is a racehorse. Wikipedia doesn't have a page on him, but he finished last in the 1987 Kentucky Derby, due to a sudden hemorrhage from the lungs that as far as I know was never actually explained.4 I have two reasons for being interested in this as a seedling name: the first is the plain, surface-level meaning of the name, which I approve of, and then the second is that Demons Begone gets a mention in a book I really like, Jay McInerney's Story of My Life.5 Bright Lights, Big City got all the attention, but I enjoyed Story of My Life a lot more and think it's a better book.

• Exothermic is the chemistry-class term for chemical reactions that release heat, and is mainly a reference to the color.

• Fornax is a Southern Hemisphere constellation, previously considered and rejected for 106A "Jaws of Elmo."

• Svarog may or may not be the name of a Slavic fire/blacksmithing deity. 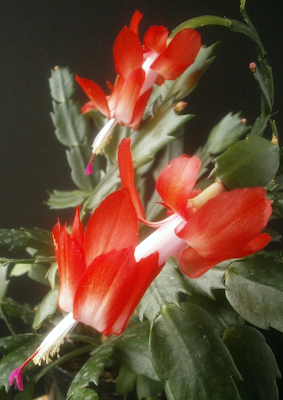 So okay. I feel like Svarog is maybe a little too strange of a word (one should be cautious around any word that's easier to pronounce backward than forward), and Arcturus is sort of difficult to pronounce. Of the remaining three, Demons Begone has the best story attached to it, and is the only one composed of relatively familiar words. On the other hand, it also contains the word "demon," which people get weird about. Though banishing demons is something I think most people can get behind, so maybe that's a wash. Fornax is fastest to type, and has a nice science-fictiony sound to it. I can't think of anything Exothermic does better or worse than the other two.

I've noticed that when I talk about multiple names before selecting one, the one that usually wins is the one I wrote the most about. So part of me wants to go with Fornax, just to interrupt that pattern, but . . . I can't. I just like Demons Begone better; Demons Begone it is.


1 I did actually settle on one, briefly, which I won't identify because if I tell you what it was then you'll all be, oh, but [name] would be perfect, you should go with [name], and since I've already decided that I don't want to use it, and since I can't figure out exactly what I don't like about it (I just know that I'm uneasy about it for some reason), I figure there's no point in teasing you with a name that I've already decided that I don't want to use. Maybe it'll pop up again anyway.
2 Many of them are racehorse names; there are also a few famous(-ish) people who I sort of want to name seedlings after at some point or another. The remainder are TinEye names I liked but rejected for other seedlings, and names that popped into my head at random that I thought would maybe work.
You would think that band names would be a good source -- people are always noting that this or that combination of random words would make a good band name -- but I was unable to find any ideas I liked at the sites that came up in a search. (Actually, there was one -- "Traditional Desert Gentleman" -- from a bluegrass band name generator that might have been passable but for its length.)
3 (Stars aren't "on fire" in the way that wood can be on fire -- nuclear fusion is not at all the same thing as rapid oxidation -- but they are certainly very hot, and they glow, and this particular one is orange. So, close enough?)
4 Apparently this is just a thing, with racehorses? Sometimes they run really fast, sometimes they hemorrhage from the lungs? I know nothing about racehorses aside from the fact that a lot of them have goofy names.
Oh, and I should probably add that Demons Begone wasn't killed after/because of this; he survived to race again. In case you were worried.
Though he's dead now. 1987 was a long time ago, after all.
5 Chapter 9 takes place at a Kentucky Derby party; I had always assumed that Demons Begone was a name McInerney invented for dramatic fictional purposes, a horse/idea for the main character to root for, but no: there was an actual horse by that name. I'm unsure whether this makes me more impressed with McInerney, or less.
Posted by mr_subjunctive at 3:00 AM

Thank you for letting us know that the horse survived.

I'm surprised you aren't familiar with John Scalzi's list of band names. Or maybe you are and you realize they're all ridiculous. Anyway here's the link: http://nextbandname.tumblr.com/.

Happy Holidays to you and the whole family! I'm just happy that the days are getting longer.

Personally, I was rooting for "Svarog"..... Very vibrant coloration!