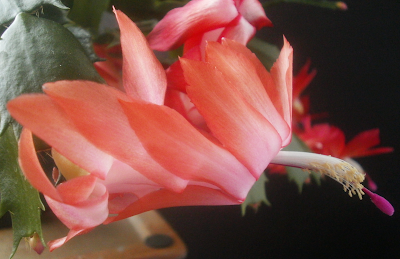 -- and it needs to have a great name to go along with that, but which one to choose? TinEye gave me 31 options to start with,1 which I reduced (with difficulty) to 7. And then the slow, painful process of elimination began.

Fondant tends to be lighter, more pastel colors like this, so it seems reasonable as a name, plus I like the word itself for some reason I can't identify, but fondant could also be any other color at all, plus one of the more distinctive things about fondant is its smooth, even texture, which Schlumbergera petals don't share. (It might make a more appropriate name for an Anthurium seedling, from a texture standpoint.)

There's also nothing obviously wrong with Zenith, though my personal associations are all wrong -- the Sinclair Lewis novel Babbitt and the TV manufacturer. I like the idea of a name beginning with Z, but there are probably better Z names.

Google translates Pesche Dolci as "sweet peaches" (via Italian). Though they look more like sugared peaches in the photo. In either case, though I can see how TinEye got there, actual peaches are more orange-yellow (inside) or red-orange and orange-yellow (outside). I like the name (and it's extra classy-sounding, being in Italian and all), so I'll keep it in mind for later, but this isn't the right seedling for this name.

Minnesota somehow just seems right, but there's not a whole lot in Minnesota that is actually this color, as far as I know -- I mostly think of Minnesota as white, green, blue, or a combination thereof. This is very much the color of certain winter sunsets. Although Minnesota gets the same number of sunsets that everybody else does, it has way more winter than most, so the name is maybe color-appropriate in that way, but that's quite a stretch. I don't know. I like Minnesota as a name, and I could be satisfied with it if there were no other options, but let's keep going. 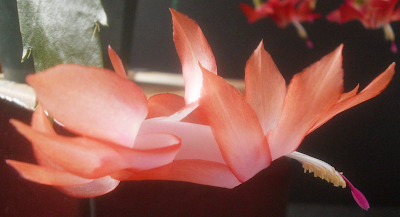 The three remaining names are Ice Castle, Sunrise From Bed, and Crone Island.

Ice Castle seems appropriate for a pastel-type bloom, and I like both the name and the mental image, and it seems like it could go with this flower fine, but that's sort of as far as it goes. Like Minnesota, I'd be happy with it if it were the only name standing, but it's not, so let's move on.

The actual title on Sunrise From Bed was "Amanecer Desde La Cama." This could also be something like "waking up in bed," I think, but since the photo shows a sunrise, and since sunrise is way more colorful, I'm going to assume Google Translate got it right. It's the only color-appropriate option remaining, and it's sort of a nice mental image. (I suppose it depends on how you feel about waking up.) It's a little long, as names go, but otherwise adequate. 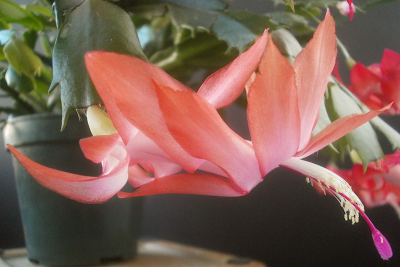 Crone Island was actually tagged "islamujeres," an actual place near the northeast tip of the Yucatán Peninsula in Mexico. The reason it didn't stay "Isla Mujeres" is because this made me think of Crone Island.

Crone Island will take some explanation.

Though there are at least two real places called Crone Island,2 the one I have in mind is a mythical island conceived in this thread about emotional labor at MetaFilter.3 Crone Island isn't an imaginary place where there is no emotional labor, and it's not necessarily a place without men either: the fantasy is that it's a place where emotional labor is noticed and reciprocated, which also happens to have margaritas and tacos. Which sounds like a good enough idea to name a seedling after.


1 I flip through TinEye until I've got at least 30 plausible names, is why there are always like 30-32 initial options.
2 (Internet searches mainly turn up the one in Alaska, a nearly-microscopic piece of land nearly in the exact center of the Aleutian Islands, but there is also one in Minnesota, east-northeast of the city of Courtland, which is about 90 minutes due southwest of Minneapolis.)
3 The thread is very, very long (2115 comments -- Firefox claims it would be 737 pages long if printed out.), and difficult to summarize well, and the concept of emotional labor alone is sort of difficult to talk about, because the term was being used differently at MetaFilter than it is elsewhere. I'll almost certainly do a bad job of explaining, but since I brought it up, I suppose I have to try anyway:
The usual meaning is occupational. Emotional labor is the work it takes to display the emotions your employer expects of you. This has more relevance to some jobs than others -- a waitress is going to devote more energy toward being pleasant to customers than a factory worker will.
At MetaFilter, the term was used differently, because the article under discussion used it differently: the article never exactly defines emotional labor, but it's described in terms of "offering advice, listening to woes, dispensing care and attention." It's the sort of thing that you'd think is just part and parcel of friendship, or parenting, or being married, but it can become a big problem if it's unevenly balanced, as it frequently is. It's an even bigger problem because so much of it is taken for granted and therefore basically invisible. If you've had a friend who is constantly wanting to talk to you for hours about problems they're having with relationships and family and so forth, things you're supposed to care about even though they don't directly affect you -- and of course you'll listen to them; they're your friend, after all -- but when you have a bad day and try to talk to them about your problems and they go, yeah actually I'm really busy right now; I'm sure you'll figure out what to do, though, welp gotta go TTYL, something about that friendship begins to feel wrong. And what's wrong about it is that the balance of emotional labor is off.
What I found so fascinating about the MetaFilter thread, though, was that the discussion pulled a lot of other activities into the "emotional labor" umbrella, things that went beyond obvious emotional support, into what I'd call "emotional management." Like, early in the thread, examples of emotional work are things like husbands asking wives to listen to blow-by-blow accounts of workplace drama repeatedly, and "taking care of someone else's emotional needs without having your needs even acknowledged." Several more comments in, though, and emotional labor has expanded to cover sending greeting cards, arranging playdates, and decorating the living room. Which aren't about being a shoulder to cry on, but are still about going out of your way to consider the feelings of others.
Like I said, I'm probably doing a terrible job of explaining this, but the discussion actually made sense of a lot of things that I'd never understood before. Greeting cards in particular had long baffled me, because I couldn't see a practical use for them. The MetaFilter discussion revealed that they're about relationship maintenance, about letting someone know that you've thought about them and remain invested in the connection you share. They're symbolic, not ends unto themselves.
Likewise, I've always thought it odd that U.S. culture is so insistent that men just aren't concerned with emotions and don't notice or care about anniversaries or having a clean house and so forth, but I never had a good counterexample until someone noted that men actually think a lot about other people's feelings during courtship, and will go way out of their way to consider feelings, buy gifts, remember anniversaries and birthdays, clean their place before someone comes over, and so forth; they stop doing so after marriage because acknowledging those things takes effort to do, and nobody expects men to because we all know that men are terrible at feelings/anniversaries/etc.
Also I was astounded at the number of grown men who don't know how to do laundry. Like, literally have no idea how laundry even works, couldn't even guess at how to do laundry. And that's not even close to the worst story. Not by a long shot.
Anyway. If this sounds interesting to you, check it out. Nobody expects you to read all 737 pages if you don't want to (I haven't gotten to the end myself.), but you don't have to read the whole thing to get the idea. If this doesn't interest you, then you've wasted a couple minutes reading this footnote, but you never have to think about it again.
Posted by mr_subjunctive at 3:00 AM

I'm intrigued by your unfinished sentence: And this is doubly the case for restaurants where

I was aiming for something like big chain restaurants where corporate headquarters gives specific instructions for emotional displays, like, waitstaff must smile at customers and make eye contact within fifteen seconds of greeting them, or something like that. I feel pretty certain that something like that must exist (it actually feels like I've read about exactly that thing and just couldn't remember where), but I forgot to check into it, so the sentence went unfinished.

That whole footnote took forever to write, and was one of those cases where I went over and over what I'd written already to the point where the words lost all meaning and editing them became impossible.