We've seen a flower by this name before (2012), but the colors were different then (orange-red in 2012, brown-yellow in 2015), and I don't think the difference can be explained by the lighting or the camera or whatever. I mean, the shapes are different too. 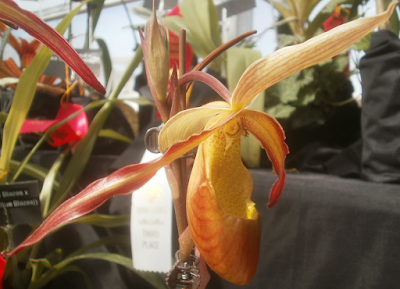 The available online photos suggest that this year's pictures are closer to what the actual registered hybrid looks like than 2012's were. It would then follow that the 2012 pictures were misidentified by me, the exhibitor, or the seller. So what was I taking pictures of in 2012? I suppose we'll never know. (UPDATE: Read the comments. Nycguy knows.) 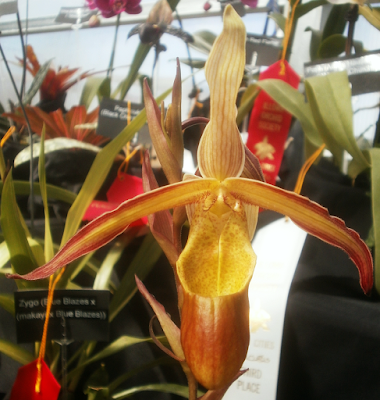 Anyway. Had some trouble photographing this; the petals are narrow, which makes it difficult to convince the camera's autofocus to pay attention to them. But I got some passable shots anyway, obviously, and it seems like a nice enough flower. 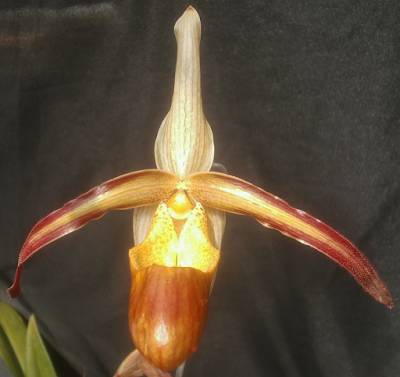 As you know, seedlings of the same cross can turn out differently. That's true of your Schlumbergeras, and even more so of orchids.

You can only expect plants with the same clonal name as well as the hybrid name to look exactly alike (and even then, the methods of artifical propagation can induce mutation).

So it's very possible that these two plants are both Phrag. Sorcerer's Apprentice, but from different seedlings.

Ah. Well, yes, that would explain it.

I guess I'd been operating under the unconscious assumption that if no clonal name was specified, it meant that no clonal name was needed (because all seedlings of that cross looked so similar that there was no need to distinguish them from one another). So now I feel stupid.

I always thought that orchids only get official clone name if they get awarded... Anyway, here is one with green/brownish colors that is
Phrag. Sorcerer's Apprentice too.

NYC is spot on. Only clones can be expected to look alike -- and even then, as he pointed out, mutations can occur