Seedling 033A doesn't have many distinguishing characteristics; it's basically one more in a long series of orange/pink blooms.1 This doesn't make it any less deserving of a name, but it does make it a little bit more difficult to care about the name. So here we go.

TinEye gave me 30 possible names, which I reduced to six, and I considered seven other "emergency" names, but only wound up adding one of those to the list of serious contenders. The themes were "extreme femininity" and "art." I didn't plan it that way. It just happened. 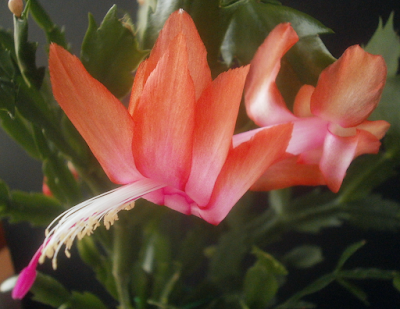 I don't have anything in particular against Stevie Nicks, and she gets points for showing up organically as part of the TinEye search, but I can't say I feel like I've ever really connected with her music.2 Also orange and pink aren't Stevie-Nicksonian colors at all.3 And her involvement in season 3 of American Horror Story didn't improve my opinion of her.4

And there is technically nothing wrong with Miss Nicaragua as a seedling name, but it doesn't sit well with me. I think I'm worried that it would come across as disrespectful of beauty pageant contestants, or Nicaraguans, or something. (I actually have a lot more respect for beauty pageant contestants now than I did, say, a month ago, because I found the Tom and Lorenzo posts discussing the "national costumes" portion of the Miss Universe pageant from this year and there turns out to be a hell of a lot more drag queen / Miss Universe overlap than I would ever have anticipated. Highly, highly recommended. Part one; two; three; and four. Also see: Genevieve Valentine's coverage of the same segment.5) 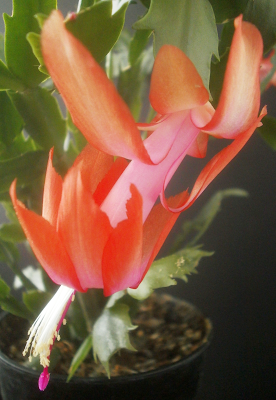 Femmebomb is, if I understand correctly, the title of some kind of yarn-bombing art-installation sort of thing, or possibly more than one of them. It's really hard to tell. A 2004 Femmebomb has an online installation video at YouTube, though the TinEyed photo is from 2007. Best guess on the 2004 Femmebomb: it appears to be a knit building-cosy, or at least a gesture in the direction of one.6 As a concept, I guess I'm on-board (though I wonder what happens to it when it rains. And autumn when the leaves start to drop is probably no picnic either.), but as a seedling name, I don't think so. Maybe if the flower were a little more obviously girly -- pink, double the number of petals, maybe ruffly petals, something. At best, 033A is a Femmegrenade, not a Femmebomb.

I like Impossible Flag as an idea (the photographer has a series of "impossible flag" images, which mostly appear to be carefully-cropped shots that result in a geometric, vaguely flaglike picture, many of which would probably be pretty easy to convert to an actual flag so I'm not sure how he justifies calling them "impossible"), but as a name I don't think it works very well.

Distant Lights is sort of descriptive, I guess, in a way, somehow. I don't know why it appealed to me in the first place, now that I look at it. 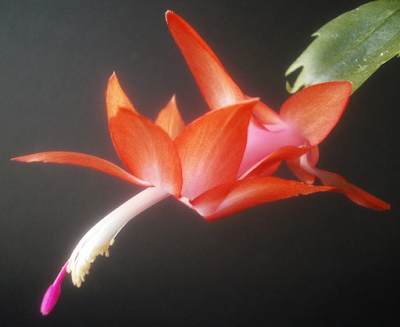 Which leaves us with two: Clueless and Dusty Springfield.

This isn't really the sort of color palette I think of when I think of the movie Clueless; it's hard to imagine Cher putting pink and orange together on purpose, or doing anything with orange at all. But the word feels like it fits the flower pretty well anyway, somehow. I think it could work.

The color palette feels a lot more like Dusty Springfield than seedling 106A did (though the paler bloom fits better than the darker one does), which I guess is why she got dragged in as an emergency name. 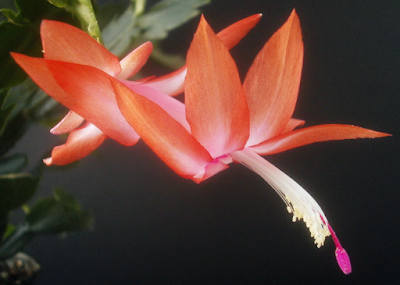 So then after briefly thinking wait, maybe Miss Nicaragua would be workable after all, who knows, and deciding against it a second time, for the same reasons, I realized that I like Clueless way better than I like Dusty Springfield, and it turned out not to be much of a contest. Obviously, seedling 033A is Clueless.


1 It's possible that 033 has two distinct seedlings in it -- looking at the photos, there seem to be both a slightly lighter orange/pink with somewhat ragged-tipped wide petals (first two pictures in this post), and a slightly more saturated orange/pink with pointed narrow petals (last two pictures). I can't know for sure until I get several blooms at once, to compare, and that probably won't happen this year.
2 Well, "Landslide." I like "Landslide." But I'm actually more familiar with the Dixie Chicks cover than I am with Stevie Nicks' original. (The Dixie Chicks video, which I hadn't seen until I started writing this post, is terrible, by the way, and should serve as a cautionary tale to all music-video directors: don't do green screen and CGI effects if you don't have the budget to make them look at least a little believable. Unless the director was actually aiming for country-pop-music-video-by-way-of-The-Persistence-of-Memory, in which case the execution was fine, but the concept went horribly wrong.)
For the record: Stevie's version is better, if only for showing some restraint on all the show-offy harmonies. I get that showoffy harmonies are the Dixie Chicks' thing, but hey, Dixie Chicks, know when to throttle back.
And I say this as someone who likes the Dixie Chicks.
3 The first two pages of image searches for her name are approximately 75% black outfits, 24% white, 1% dark gray, and then there's a rounding error of one burnt-orange outfit and one red outfit. The lady likes her black clothing.
4 AHS: Asylum or GTFO, is my feeling. Except for Myrtle (Frances Conroy), who was wonderful, and maybe three of Kathy Bates' lines (Llllllliiiiiiiiiieeeeeeeessssssssssss!), Coven was dull and stupid, with no redeeming qualities, and I am a lesser person for having watched it.
5 Indeed, it's entirely possible that Miss Nicaragua's entry in this year's pageant makes it literally impossible to make fun of Miss Nicaragua. (Also worthy of special mention: Indonesia, British Virgin Islands, Nigeria, Venezuela, Panama, Argentina, Curacao, and Guatemala. Don't misunderstand: I unironically love all of these -- Argentina's is one of the best things I have ever seen -- as well as several of the others that I didn't link to. But what could anyone possibly say to insult or demean one of the outfits that it wasn't already shouting about itself at maximum volume?)
6 (It's possible that only the front of the building is covered.)
Posted by mr_subjunctive at 3:00 AM

I have to thank you for introducing me to the "drag" component of the Miss Universe competition. Those links are a hoot!