This looks very pretty, but it seems like the growth habit would make it awkward to grow. I mean, that has to take up quite a bit of space in a greenhouse or whatever, right? Compared to an upright-growing plant of equal mass? 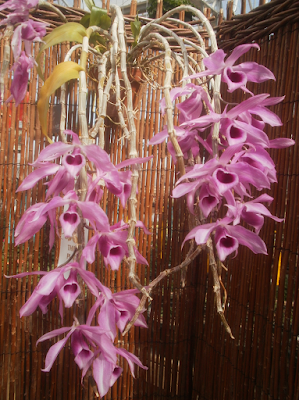 That's the sort of question I could ask the Illowa people about at the orchid show, if I hadn't already spent so much time complaining about the backgrounds and proofreading. But I have, so I'm a little afraid of them.1 (This one's sign read "anosum" instead of "anosmum." They're just fucking with me now, right?) 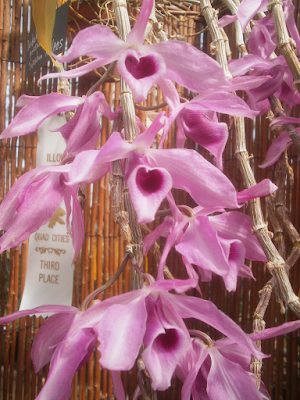 'Superbum' turns out to be Latin (Google Translate renders it as "proud," in English, which may or may not be accurate2), but when I'm feeling especially playful or British or something, I like to read and pronounce it as a synonym for "phenomenal backside."


1 (As you probably already know, orchid fanciers can be very menacing.)
2 I'm never quite sure how seriously to take Google Translate results.
Posted by mr_subjunctive at 3:00 AM

I read that as Super Bum, meaning some California surfer dude...

Shame you didn't get a photo of the plant's backside so we could judge. ;)

If you click on the translated word in Google it will usually give you a list of alternative translations. Though in this case only selfwilled was an alternative. Not sure how Rahab, the Canaanite sexworker and innkeeper who betrayed Jericho to the Jews, got in there but she was described as one of the four most beautiful women in the world (the other three being Jews, coincidentally) so her behind was, presumably, quite peachy.

Lewis & Short (on Perseus http://www.perseus.tufts.edu/hopper/morph?l=superbum&la=la#lexicon ) have both positive and negative meanings:

There is also a Graptopetalum superbum! It is one of my favourite members of the Crassulaceae. The plant was originally described as G. pentandrum ssp. superbum in 1987 but it was elevated to species level in 2003. I know you have gone a bit off succulents, but try googling "graptopetalum superbum flower" in Google Images and you will see what I mean when I say it is an impressive plant.