As recent new Anthurium blooms go, Cate is good. She doesn't do anything amazingly well, when compared to all the seedlings at once, but she does most things better than average.

She's not completely thrips-resistant, but is at least not horribly disfigured by thrips scarring. The color isn't some wild new combination I've never seen before, but hey, at least she's not another pink/pink or red/yellow. Purple-pink/white is a perfectly respectable combination, and the spathe color is one of her better qualities. 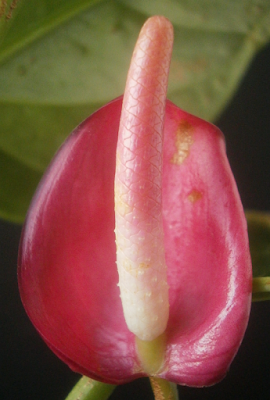 First bloom, 5 December 2015. Nice enough, but, you know, whatever.
Also good: she seems to be a relatively prolific bloomer, from what I've seen so far. I accidentally broke off her first bloom during watering, but Cate produced a second one within about a month, and it was incrementally better than the first: a little less scarred, a little bit larger, and it photographed much better. 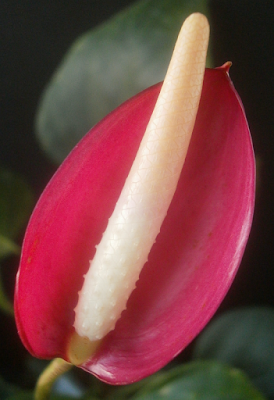 Second bloom, 14 January 2016. Hello, nurse!
As I write this, on 15 and 16 January, a third bud is barely visible at the center of the plant: if that one winds up developing normally and opening, it's possible Cate will qualify as a fast bloomer, like her sister, 0527 "Ms. Lucia Love."1

If I have a complaint about Cate, it's that her foliage could be better. It's still better than average, I think, and I've promoted seedlings with worse (0386 "Violet Chachki," for example), but it isn't good.2 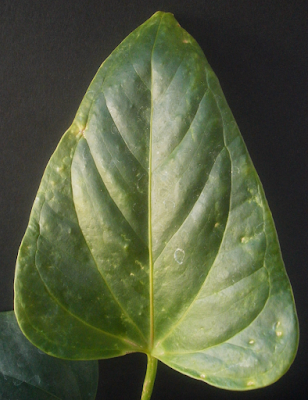 The whole plant could be fuller, considering she's a little bit past 2 years old now, but I think I can see a sucker beginning to develop, so that might be a temporary flaw. 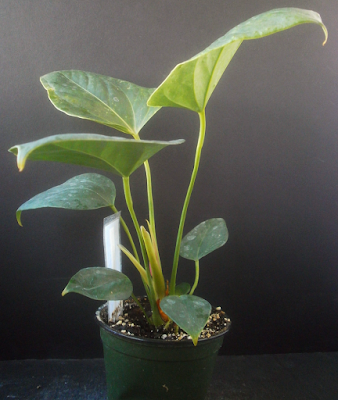 Granted, this is also an older photo (October); Cate has one or two more leaves now. 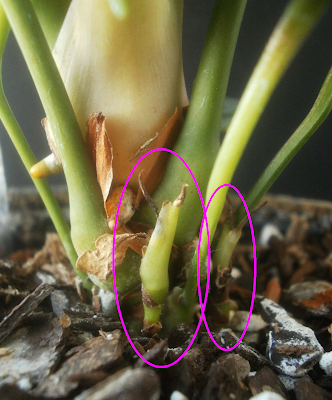 I'm not 100% certain these are suckers; neither has yet actually produced a leaf (often the first few leaves on a sucker fail to develop properly; I don't know if the thrips are getting to them or if the baby plant isn't getting enough water or what), but the one on the left, at least, sure looks like a sucker to me.
So, final verdict -- not only is Cate staying around for a while, I've up-potted her already.

Which reminds me: I've promoted a couple other seedlings to 6-inch pots recently, both of which were initially disappointing.

0406 Tricia Nullmaritch, like Cate, had a nice bloom color, but her first bloom was unattractively scarred up and I was disappointed at the time. The second bloom from Tricia was also scarred, but a lot less so, and I decided that I was interested enough in what she'd do that I was okay with moving her to a 6-inch pot. 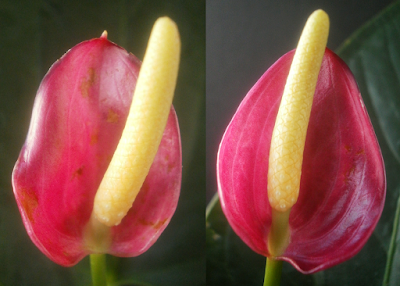 Tricia's most recent leaf improved significantly on the old ones as well; it's not unblemished, but it's better. 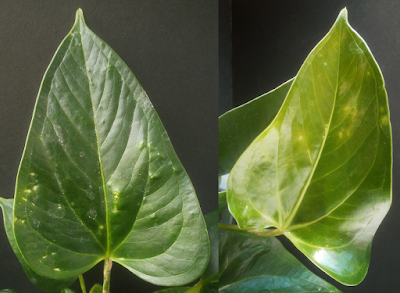 0408 Tex Messich likewise had a lot of spathe scarring, but the second bloom was better, and significantly bigger. The color isn't particularly out of the ordinary -- technically, Tex is merely a pink/beige -- but in some lighting conditions, the spathe is slightly orange or coral or something, which is mildly interesting, and both blooms so far have been held on short peduncles. Short peduncles3 aren't good if I'm aiming for something commercially viable, but I find them sort of intriguing despite myself. (And anyway, not everything in the whole goddamn world has to be turned into money. I'm allowed to keep unsellable seedlings for my own enjoyment if I want to. So there.) 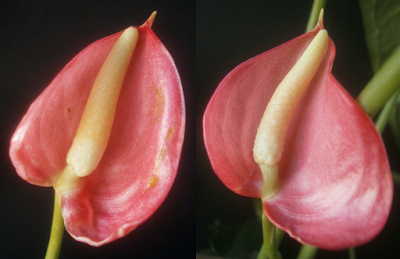 By far the most interesting thing about Tex at the moment is that he's been producing gigantic new leaves. I mean, his leaves were always pretty big for his age, and relatively unscarred, but the latest one is about 8.5 inches (22 cm) long by 5.5 inches (14 cm) wide, which is almost as large as my seedlings' leaves get.4 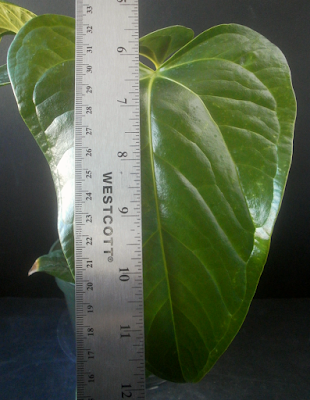 When the leaf is flattened out a little better than this, and you measure from the top of the lobes to the tip, it comes out just short of 8.5 inches. The photo doesn't show this well, I know.
I already believed that it was good policy to give the seedlings a shot at a second bloom before discarding them, but it seems like that policy has been validated quite a bit lately.


1 All five seedlings in the BH seedling group ('White Gemini' / 23 October 2013) to bloom so far have been unusually enthusiastic about doing so, though that doesn't necessarily make them good seedlings.
Cate and Lucia have begun their third blooms, 0532 Amber Alert is at least on her second, if not third, though they're bad, and 0544 Ida Claire Warren produced two blooms pretty close together, rested for a bit, then started on a third. Ida's aren't very good either -- they photograph well, because there's like a 36-hour period after they first open when they're very nice, but the thrips love them, and the color dulls quickly.
0537 Bridgette of Madison County has also done two full blooms and one bud so far, but Bridgette is competitive for the Worst Seedling Bloom Of All Time title, down in the bottom 10 with 0373 Shangela Laquifa Wadley, 0218 Noah Fence, 0415 Darby Dragons, 0283 Anne Pursand, and 0558 Amber Waves. You'll get to judge for yourself soon; Bridgette's post is scheduled for February 2.
2 Interestingly, the plants that get promoted to 6-inch pots mostly seem to grow out of the scarring, to some degree or another, so it's possible that the thrips aren't solely responsible. Smaller pots also dry out faster and more often, so it could be a thrips/drought combination that causes the bad leaf scarring, or it's possible that having the extra room for roots to grow strengthens the plants and makes them better able to resist thrips. Or maybe the improvement comes first, then the up-potting, and the only reason they seem to get better after up-potting is because I only up-pot plants that are already getting better.
3 (Previously seen in 0335 "Donna Fanuday", who continues to produce them even after getting moved to a bigger pot. So I guess it's genetic.)
4 When I grabbed a ruler and went big-leaf hunting, I found four seedlings with at least one leaf bigger than Tex's: 0275 Yvette Horizon, 0330 Faye Quinette, 0334 Jean Poole, and 0360 Heidi Gosique. Another four either tied Tex or came up just short: 0126 Erin Dirtylondry, 0259 Tasha Salad, 0314 Camille Yen, and 0380 Ewan Watarmi.
Posted by mr_subjunctive at 3:00 AM