079B is a perfectly nice orange / pink. I feel like I probably have enough orange / pink blooms at this point and really don't need any more, but the Schlumbergeras disagree. So I suppose I should give it a name.

With emergency names added in, there were somewhere between 35 and 40 name options for this seedling, which I pruned ruthlessly (ruthlessly!) down to 5. 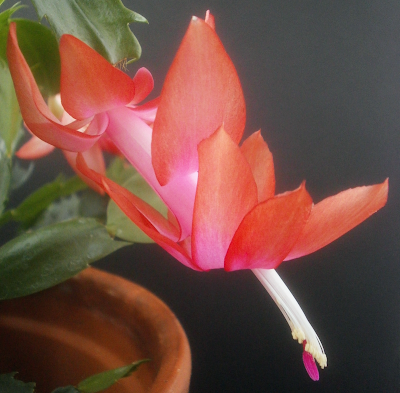 Cyndi Lauper was previously considered for 083A "Psychedelic Bunny," and the name gets points for showing up organically as part of a TinEye search, but if we're going to be naming this one after a musician, I think it should be Annie Lennox, on account of it having significant color overlap with the music video for "Why." Plus the music video for "Why" renders Showgirl a little redundant (even if showgirls did show up twice in the TinEye results). So we'll keep Annie, and maybe the other two will show up again for some other seedling. 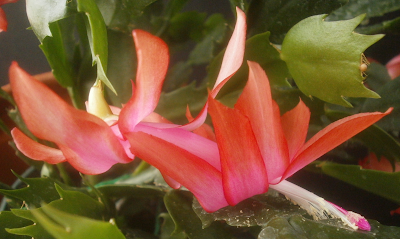 Haleakala is the name of the volcano that made the eastern 3/4 of the island of Maui, in Hawaii. It wouldn't normally be on the list, but it's a highly meaningful name to the husband,1 and it's not like I'm opposed to it. 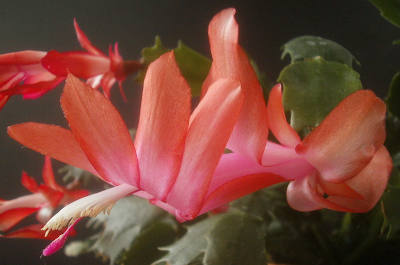 Last one is Easter Egg, which I mean in a couple senses and don't mean in one sense:

1) it's got sort of Eastery colors,
2) it's an unnecessary extra thing (079A already existed, so 079B is a bonus), in sort of the same way easter eggs in computing are unnecessary extras,
3) but on the other hand, it sort of implies that the plant should be blooming at Easter and/or that this is an Easter cactus, which are probably not true and definitely not true, respectively. 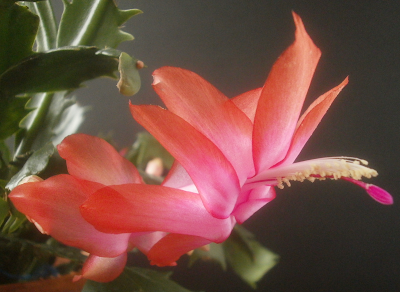 Ordinarily, I'd probably end up with Easter Egg, which is most like the kinds of names I gave the seedlings originally ("Brick Wall," "Clownfish," "Sofa Fort"), but I kind of have to go with Haleakala, for the husband. (Sorry, Annie. Maybe next time.)


1 I was actually thinking that as a change of pace, maybe I'd let the husband name one of the seedlings, and I had that idea right before this post, but I figured there was no suspense to it, 'cause he'd choose Haleakala as soon as he saw it, without even looking at the other options. We have eight more Schlumbergera seedlings to get through, that I know of, so odds are good that I'll do that with one of them anyway.
Posted by mr_subjunctive at 3:00 AM

Thanks for the link to "Why"--one of my favorites. I think the colors are going to have to be more saturated to deserve Annie's name.

I mistakenly posted my thanks re your blog expertise at the previous post. Did want to let you know that I was not going to toss the philo.bipinna. But look for a good owner via my gay neighbor who has a landscape co. And could sell it as a patio plant.
Thanks!

Personally, I think "Cyndi Lauper" and Haleakala both desire more impressive flowers. Same for Annie really. When I hear Annie Lennox, I think of the fiery orange hair she often sported.

Maybe I should consider Annie Lennox for 066B, then? The pink is relatively strong, and the orange could pass for fiery.

I think 066B would be a better option but would lean toward a flower with more orange. Also don't know how I wound up with "desire" in my prior post ..... Was supposed to be "deserve".