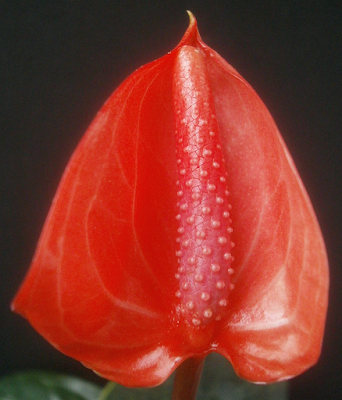 The seed which would eventually be known as 0115 Erlene Adopter was sown in December 2011. In April 2014, I divided it into eight different pots. Partly this was because I couldn't be sure that there was only a single seedling in the original pot; I don't pots multiple seedlings together anymore, but I did sometimes when I first started trying to grow Anthuriums from seed, because I didn't expect many of the seedlings to survive.1

There's plenty of reason to assume that the four plants to have budded are all offsets of the same seedling. The three blooms are indistinguishable,2 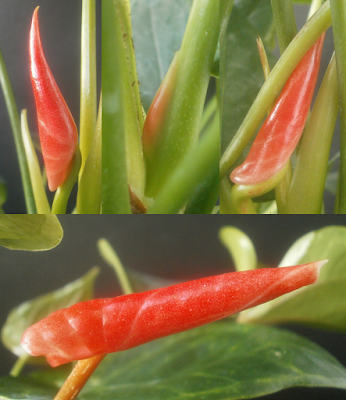 Top row: 0580 Marsha Marsha Marsha, 0581 Adam All, 0115 Erlene Adopter. Bottom: 0586 Vera Special.
Adam didn't progress much beyond where it is in the photo, so I know the picture isn't directly comparable, but trust me, it was headed toward the exact same shade of orange as the other buds.
and all seven survivors even do the same weird thing with their leaves, where parts suddenly go yellow in a symmetrical sort of way, though I don't have a good picture of Erlene, specifically, doing that.3

It's possible that some of the three plants which haven't budded yet might be genetically different, but Erlene, Marsha, Adam, and Vera all appear to be clones of the same original seedling, a seedling which is an offsetting monster.4 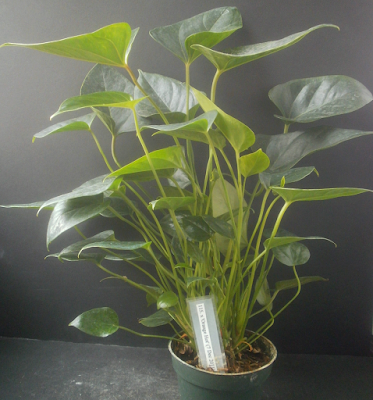 Erlene, last September, after producing a fuckton of new offsets to replace the ones I removed in 2014. Pot size is 4 inches (10 cm) in diameter.
What all this means is that, without ever intending to, I find myself with a bunch of copies of the same plant, and it's a plant that happens to offset a ton, so I should have no trouble making a bunch more whenever I want. It also appears to be unusually resistant to scale. (I don't think I've ever seen a scale insect on any of the eight divisions, which is damn near miraculous.) It's not immune to thrips, but it's at least better than most; it produces pollen and can be pollinated; and the blooms are reasonably large and nicely-colored.

So. Although I would like to know what's causing the yellowing first, Erlene is likely to be the first Anthurium seedling I offer for sale. That wouldn't necessarily happen this year; still a lot of stuff to work out w/r/t Anthurium selling. But the Erlenes will probably be on the list whenever it gets made.


1 This was a huge mistake. If you ever decide to try to breed some of your own plants together, give them all their own individual pots. Yes, you'll need more pots and soil that way, and yes, you'll probably wind up throwing out a lot of soil, but wasting soil is better than the complications that result from making seedlings share pots.
2 They're actually even harder to tell apart than you'd expect from the composite photo. The differences in shade are the result of them being photographed at different ages (the spathes are slightly darker and redder when they first open) and under different lighting conditions.
3 Here are leaves from 0580 Marsha Marsha Marsha (top) and 0581 Adam All (bottom), though:

These are both extreme examples. Normally the yellow is just a few streaks on either side of the midrib, and they don't connect to one another to make the netlike patterns you see in the photos, but the subtler yellowing doesn't show up well in photos, so.
4 My bet would be that Lucinda, Lee, and Twitch are also clones of Erlene: though all three are a bit stunted by comparison to the other four, they've all done the weird yellowing thing, which I've only seen on other divisions of Erlene's, and the leaves of all seven plants are of similar shape, color, and texture besides. Should they ever bloom, I'll really, really know that they're 0115 clones, but I'm pretty sure anyway.
Posted by mr_subjunctive at 3:00 AM

The photo speaks volumes. Your plants are rather chlorotic due to iron deficiency. Repot them into coco humus, stop using chalky water for today and in the future, and offer a helping - i.e. healing - hand: a liquid fertilizer (low N-P-K) containing balanced micronutrients.

You'd think so, except:

1) it's not like I'm treating the Erlenes any differently than I treat all the other seedlings. There have been 350 seedlings of roughly the same age (sown before August 2012), 80 of which are still alive and growing, and the only ones that have ever done the weird yellowing were the Erlenes. Yet all 350 were watered with the same tap water, potted in the same potting soil, and fertilized with the same fertilizer (which does contain the micronutrients Fe, Cu, Zn, B, Mn, and Mo). So if the Erlenes all just happen to be iron-deficient when none of the others were, that's a hell of a coincidence.
Since the seven Erlenes are genetically distinct from the other seedlings, it could be that they're just that unlucky when it comes to iron, and they've happened to get a bad combination of iron-absorption/-metabolism genes, but if that's the case, throwing more iron at them wouldn't necessarily help. There's plenty of iron there already, they just aren't picking it up.
2) And anyway the symptoms don't actually match for iron-deficiency: iron chlorosis normally shows up as green veins on an otherwise yellow leaf (and is very difficult to create in an Anthurium -- do a search for "iron deficiency Anthurium" or "chlorosis Anthurium" if you don't believe me) whereas I'm seeing the opposite, yellow veins on an otherwise green leaf. My growers' guide makes it sound like they're more prone to magnesium deficiency, but magnesium deficiency typically begins with yellow margins, and none of them are doing that either.
3) It doesn't really act like a nutrient deficiency. It doesn't start with the oldest or youngest leaves; in every case so far, the affected leaves have been relatively new, but not the newest. Affected leaves don't get worse over time: they get however yellow they're going to get and then stop. The three Erlenes in 6-inch pots make nice, large leaves, they've all been blooming just fine, the spathes are intact and normally-shaped, and the spadices produce berries normally once pollinated. I mean, if they're being held back by some nutritional problem, the only place it's showing up is in a leaf here or there; everything else about the plants seems either normal or unusually vigorous.

I would still try as if it were magnesium deficiency just in case. I know of plants where Mg deficiency starts in the middle leaves, though I haven't grown Anthuriums. The leaves are a little too waxy for foliar feeds to be very effective but a little dose of epsom salts on the roots never hurt anybody. The plant looks very healthy otherwise so I would imagine the deficiency is just slight. Perhaps related to the abundant offsets. I look forward to seeing the next generation from this one, I like those flowers.

Are you talking about anthurium 0580-0581 leaf comparison (own).png? If so, look at it again. It shows a) mainly yellow intercostal tissue, not an "otherwise green leaf", b) partly green, partly yellow veins, and c) a mostly yellow midrib. It is true that I did not mention veins and midrib last week, but I am catching up on this: their turning yellow most commonly indicates nitrogen deficiency. You might like to see a chlorotic leaf showing both phenomena: https://en.wikipedia.org/wiki/File:Sweetgum-leaf-interveinal-chlorosis.jpg via https://en.wikipedia.org/wiki/Chlorosis

" [...] It doesn't start with the oldest or youngest leaves; in every case so far, the affected leaves have been RELATIVELY NEW, BUT NOT THE NEWEST [...] "

James Schuster, University of Illinois, describes the same obervation and calls a spade a spade: "IRON CHLOROSIS STARTS ON THE YOUNGER or terminal LEAVES ... " http://extension.illinois.edu/focus/index.cfm?problem=chlorosis

"There's plenty of iron there already, THEY JUST AREN'T PICKING IT UP."

Exactly! And why? Due to the high pH-value of the water you use and the resultant increased pH-value of the soil, nutricients are being sequestered and cannot be absorbed by the roots. Which results in damages - at best.

Having read quite many of your texts I have the impression that for you it is 'Aut vincere, aut mori'. Which is fine, if it is your choice. Plants, however, cannot make choices; for them it can only be 'Aut pati, aut mori'. The 'pati' is limited, and the loss rates you give when writing about Anthurium seedlings in general prove the 'mori'.

nexodium (3)
N.B.
You invited me to "do a search for 'iron deficiency Anthurium' or 'chlorosis Anthurium' if you don't believe me". I did the former because I could not do the latter. :-)

Poland. > Encyklopedia kwiatów <. It is just a half sentence, but it leaves no doubt: "letnia i miekka woda" http://www.swiatkwiatow.pl/anturium--anthurium-id384.html

A site in British English: "For best results use tepid soft water" http://www.ourhouseplants.com/plants/anthurium

Then, of course, the International Aroid Society. Thomas B. Croat, Missouri Botanical Garden, states: "Probably regions of pluvial forest ... will prove to be the most species-rich of all." (http://www.aroid.org/genera/anthurium/Anthintro02.php) And: "... but a few species, such as A. scandens ssp. pusillum Sheffer and A. lacinosum Sodiro, ranges into Premontane Wet Forest and Premontane Rain Forest". (http://www.aroid.org/genera/anthurium/Anthintro07.php) "Pluvial forest", "Premontane Wet Forest", "Premontane Rain Forest" - it is not new, but it implies that all the anthuriums in these forests getting their share of soft rainwater.

A last search. Terms are anthurium and calcifuge. It brings us back to where it started; France. "Water and misting with non calcareous water at room temperature. The water quality is important because anthuriums /are/ very calcifuge." http://www.kerozenlejardinier.kingeshop.com/Anthurium-Andraeanu-bbaaaanqa.asp

It is impressive what a search engine can do for you, isn't it? :-)