In July 2010, I got a couple cuttings of Hoya obovata from a PATSP reader. They looked like this: 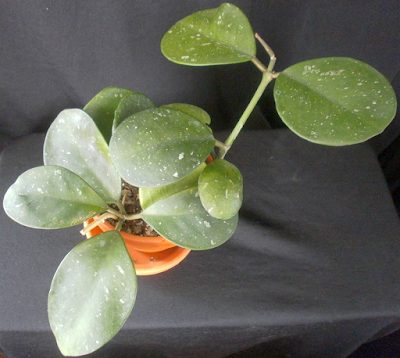 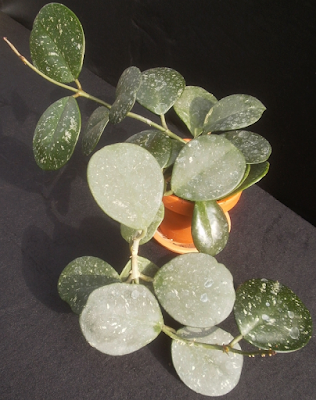 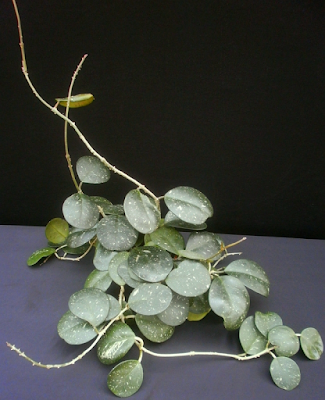 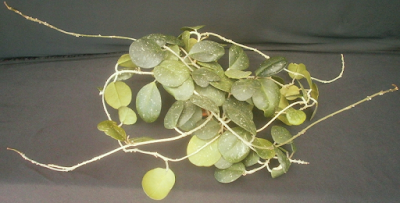 After 2013, I got seriously into the plant-breeding stuff and I no longer had time to document my plants' appearances every year, plus the plant got too big to do that with anyway, but you get the point. It keeps getting bigger.

I never expected it to do anything for me; indeed, considering my history of Sudden Hoya Death Syndrome,1 I didn't expect it would survive long enough to do anything, but it's still around in 2016, and it's bloomed. 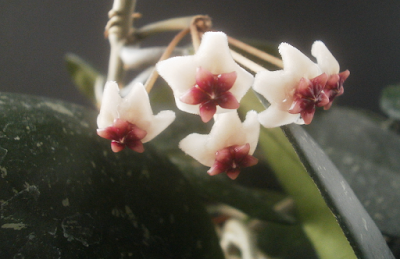 This happened quietly: I didn't notice anything was going on until I saw the first buds on 22 January, 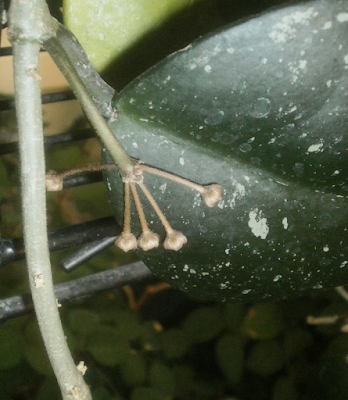 and then I forgot about them because I assumed they would take a long time to develop, so I was surprised to find opened flowers on 5 February. 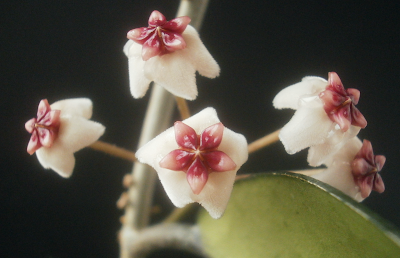 Like most Hoyas, the flowers are strongly scented; unlike most Hoyas, I don't like the scent. It's floral, and sort of makes me think of some kind of very strong carnation-rose combination, similar to H. lacunosa, but it has an extra something going on that makes me find it unpleasant.2 It's just me; the husband doesn't pick up on it. Fortunately, the scent doesn't permeate the whole house, the way some blooming plants can, and I can't even smell it in the same room unless I'm standing close. So it's not really a problem, but I'm still disappointed: I would have preferred something more like the florist's-cooler smell of H. lacunosa.

The appearance could also be more exciting. I mean, I get that not every Hoya can be H. bella, but these aren't even as pretty as H. carnosa, which is as ordinary a Hoya as there is. 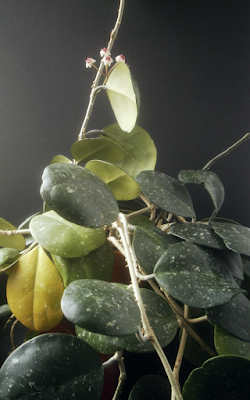 I had actually been contemplating trying to sell, give away, or throw out this plant, prior to seeing the buds, because it had never done anything interesting enough to justify keeping it around, and it takes up a lot of room, approximately half of a 1.5' x 4' (0.5 m x 1.2 m) shelf. I've also been worried about it getting scale for the last four years, though I have yet to see any.3 Now that it's bloomed, I'm . . . still thinking about selling it, giving it away, or throwing it in the trash. I do like the leaves, but I could really use that half a shelf. The Anthuriums and Schlumbergeras keep reproducing and growing, and, to be blunt, I like the Anthuriums and Schlumbergeras a lot better.

So, if any U.S. readers are interested and want to wait a couple months for a very large and unwieldy Hoya with blooms that may or may not smell badly, which probably doesn't have scale but could, and which may or may not die suddenly, shoot me an e-mail. It's possible something might be arranged. Otherwise, I'll probably take my chances with Craigslist.


1 Still no idea what the explanation for SHDS is. Some kind of root rot, I guess, since the victims usually don't have much of a root system by the time the plant dies, but there's not really a convenient way to find out what's going on before that. There's never any warning, hence the "Sudden" part of "Sudden Hoya Death Syndrome."
2 Looking back through the archives, I didn't care for H. nummularioides' smell either.
3 Which doesn't mean they aren't there. My understanding is that Hoyas are normally pretty susceptible to scale and mealybugs, though, so if they're there, you'd think I would have seen at least one at some point. Maybe my particular species of scale isn't into Hoyas?
Posted by mr_subjunctive at 3:00 AM

I would love it and will be in Iowa next week to hear Elvin Mcdonald speak in Des Moines.Mark one off my bucket list! Would that work...? Also you should see the Anthurium I saw at the tropical plant trade show called 'Bill's Beast' -huge!

I had a Hoya kerrii that threatened to eat Philadelphia AND dripped glops of dew, which, like honey, never dried. Even here in the desert. I happily Craigslisted it, sans pot even, and never looked back.

Face it. You proved you could grow it. Good work. You're done now.

Are there any updates on what would up happening with this plant?