The most notable thing about Regina is that she is, I believe, the first Anthurium seedling to get a posthumous blog post. She got thrown out on 8 March due to a scale infestation.

Usually, having bloomed will buy a seedling a little more time, if they have scale -- I'll wipe the leaves off a couple times and see whether that helps -- but in her case, I'd already done that, and it wasn't helping. The infestation seemed to be advanced enough that I doubted I would be able to eliminate it, so out she goes.

Which wasn't a huge loss. I'm not sure what to blame, but virtually all of the seedlings with ID numbers between 400 and 554 have been disappointing, and all in the same kind of way. They're almost all pink, red, or shades in between, with either matching or yellow spadices; their leaves and spathes are badly scarred from thrips, or scale, or both; the few spathes that appear are smaller than average. There have been a few seedlings in this range that I deemed worthy of moving up to 6-inch pots,1 but not nearly as many as in the 200s and 300s.

For a while, I'd thought that maybe the 400-550 group was just unlucky, just happened to come of age at exactly the wrong moment to catch bad thrips infestations, and that's likely some of it: as the thrips have gotten under better control, the seedlings' leaves have improved, as described here. I've also thought maybe it was my fault, that maybe I just dropped the ball on care somehow (bad location? too many skipped waterings?) and that led to the whole group crapping out on me. I mean, they barely hold themselves together at all. When they can be bothered to bloom, the blooms are tiny, in boring colors, and are crappily executed.

But I think Regina sort of settled the question of whether the seedlings were unlucky or poorly-maintained, and the answer is, surprisingly, neither.

So this was Regina. 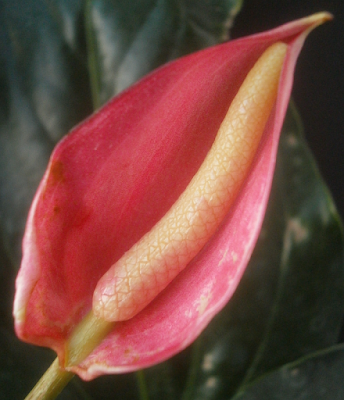 Not very interesting, except for one oddball trait she shared with 0527 Ms. Lucia Love, which is that her spadices contrasted with the spathes when the bloom first opened, then darkened over time until it matched the spathe. The above photo was from 12 January. By 14 January, the spadix was already starting to redden and darken: 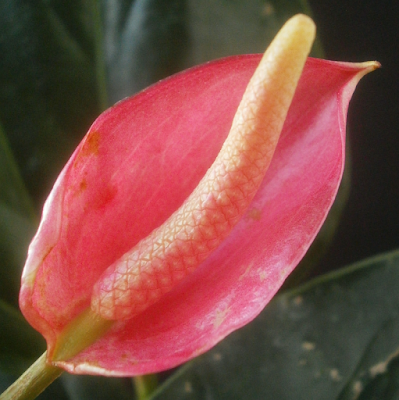 And by the 20th, the transformation was complete. 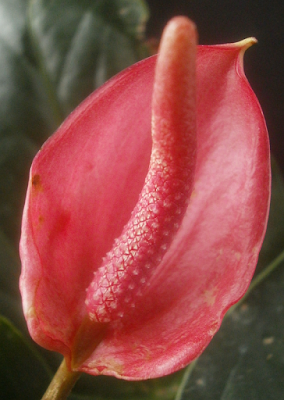 Regina and Lucia being the only two seedlings to do this so far, I naturally wondered what they had in common. Initially, the answer appeared to be not much. Regina's from seedling group BF ('Gemini' / 23 October 2013); Lucia's from group BH ('White Gemini' / 23 October 2013), so they have the same sow date, but different spathe colors and seed parents.2

However. Both BF and BH contain seedlings with characteristics that didn't come from 'Gemini' nor 'White Gemini.' Neither has ever shown any hint of a purple or magenta pigment, yet a few of the BF and BH seedlings bloomed a little bit purple.3 Neither 'Gemini' nor 'White Gemini' spadices start out contrasting with the spathe and then change color to match it, like 0527 Ms. Lucia Love and 0467 Regina Fong. And since the sow date was the same for both BF and BH, they could easily have the same pollen parent. So what pollen parent would have been around in early 2013, that contains purple pigmentation, and darkens its spadix over time to match the spathe? And is it a crappy, thrips-prone cultivar?

There are three possible parent Anthurium varieties here which produce some kind of purple pigmentation: 'Krypton,' a NOID red-violet which may or may not also be 'Krypton,'4 and the NOID purple. The NOID purple can be eliminated on the grounds that its spadices match the spathe as soon as the spathe opens, but the other two both start out with lighter-colored blooms that darken over time. I don't take photos of every single bloom the plants produce, so I don't know whether 'Krypton' was blooming in early 2013 or not, but I do know that the NOID red-violet had a bloom in late 2012.

In any case, most of the signals seem to point toward either 'Krypton' or the NOID red-violet as being the likely pollen parent for most (if not all) of the seedlings in the BF and BH seedling groups. And, the BF and BH seedling groups make up 93% (all but 11) of the seedlings between #400 and #554. So I feel like there's a pretty good case to be made for the idea that those seedling groups might suck disproportionately because they have a particularly awful pollen parent, not because I've been negligent.

Just a theory. I'll probably never know. But it's honestly been depressing, how many of the BF/BH seedlings have been crappy, so I'm glad to have any way of explaining that, true or not.6

There's no point in talking further about Regina, since she's dead, but I took the pictures so I'm going to show them to you anyway. Overall plant: 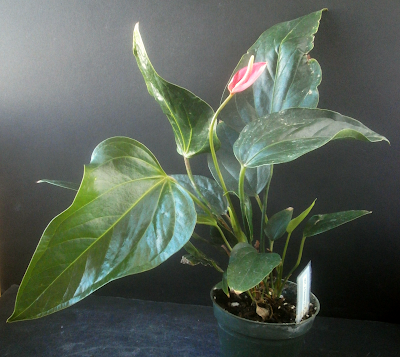 Newer leaf (which I think is also the same leaf on which the raging scale problem was discovered): 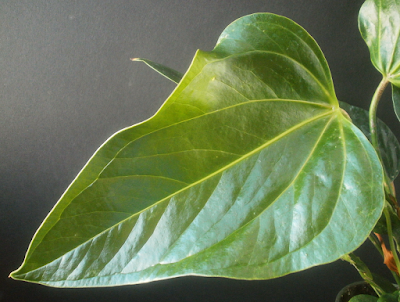 I'll try to be more entertaining in the next post. I mean, I was trying with this one, but then I threw the plant out and the whole thing had to be rewritten at the last minute, so it didn't really work.


1 So far:
• 0406 Tricia Nullmaritch (BF) has magenta spathes with a yellow spadix, but the spadix ages to green, something that none of her suspected parents does. Weak point: she's still pretty susceptible to thrips.
• 0408 Tex Messich (BF) has enormous leaves, and seems fairly resistant to thrips and scale. Weak point: blooms are fairly big but the color isn't very interesting (pink / yellow).
• 0527 Ms. Lucia Love (BH) blooms heavily and is the only other seedling to produce color-changing spadices. She has good foliage, which seems pretty thrips-resistant. Weak point: blooms are small, and sometimes on short peduncles which make them hard to see.
• 0547 Cate Sedia (BH) produces nicely-colored spathes and large leaves. Weak point: the spathes are pretty small, and the foliage is just susceptible enough to thrips that it's not very appealing. That could get better with time, though.
2 Though in fact 'White Gemini' is supposed to be a sport of 'Gemini,' so it's not clear how much the genes differ. Obviously something is different, or they wouldn't be producing different-colored spathes, but if 'White Gemini' is just a mutated 'Gemini,' most of the genes should be the same. The only consistent difference I've noticed between the offspring of 'Gemini' and the offspring of 'White Gemini' is that although both have produced plenty of seedlings that bloom red and plenty that bloom pink, the red:pink ratio for 'Gemini' is roughly 2:1, and for 'White Gemini' it's roughly 1:2. (Actual numbers: 35 to 16 for 'Gemini,' 17 to 32 for 'White Gemini.' This is a very rough count, since it includes some accidental clones, and not every seedling has bloomed, and it doesn't include buds that never opened, and so forth, but it's suggestive.)
3 'Gemini' genes dominate wherever they find themselves: most of the BF/BH seedlings have pink to red spathes with white to yellow spadices, just like 'Gemini.'
Exceptions in BF: 0406 Tricia Nullmaritch (purplish spathe), 0516 Brooke Enhart (lavender spadix), 0524 Hedda Lettuce (dark red spathe).
Exceptions in BH: 0534 Celia Putty (purplish spathe), 0537 Bridgette of Madison County (lavender spadix)?, 0547 Cate Sedia (purplish spathe).
4 It seems like the NOID is a lighter color, but I don't have many photos of either plant's blooms, and they never bloom at the same time, so I honestly can't compare them directly. 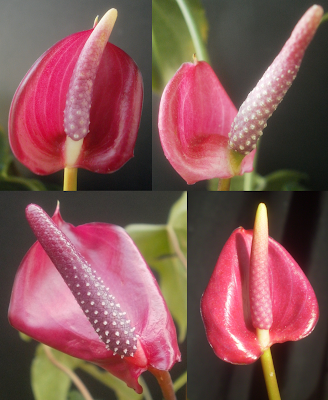 Two of these photos are of 'Krypton' and two are of the NOID red-violet. Can you tell which is which?

(A: Top two are 'Krypton,' bottom two are NOID red-violet.)
The two plants' leaves are more distinct. The NOID red-violet's are smaller, and have a wavy margin lacking in 'Krypton.' The foliage is the main reason I still believe they're different cultivars.
5 The six other known 'Krypton' descendants have been generally crappy, but not in a thrips-specific way: mostly they've just been too weak to live very long after transplanting. 0678 April Carrión is the only one still alive besides 0599 Butta, and she's growing so slowly that I doubt we're ever going to see her bloom.
6 The main argument against my theory is 0333 Isaiah Littleprayer, the only other seedling I suspect of having 'Krypton' or the NOID red-violet as its pollen parent. Isaiah has an otherwise inexplicable purple shade to its spathe, and very pale purple spadices (though they don't darken with age), and the blooms are small and infrequent, like 'Krypton' and the NOID red-violet. But, Isaiah's foliage is pretty nice, which isn't like the BF/BH seedlings at all.
Isaiah's seed parent is the NOID red, which tends to impart pretty good foliage to its offspring, so maybe the good NOID red foliage genes cancel out the bad NOID red-violet foliage genes?
Posted by mr_subjunctive at 3:00 AM