I see now that I made two bad assumptions, when I decided to name each of the Schlumbergera seedlings individually and give each one its own blog post. 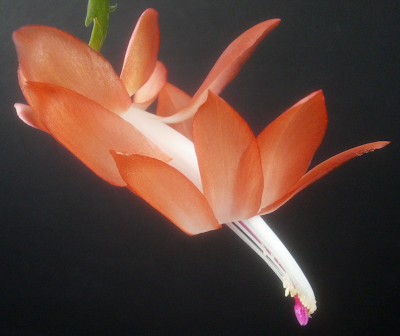 One, I was expecting a broader range of color combinations. Considering that they're almost all the offspring from a single cross, the diversity has actually been pretty good -- I can at least put them into distinct categories like "dark orange / white" or "orange / magenta" -- but I hadn't envisioned that 90%+ of them would be some shade of orange. Which limits the name possibilities.

Two, I wasn't expecting there to be so damn many seedlings in the first place; I thought they'd so a little self-selecting. Not only have almost all the seedlings survived,1 but pretty much every seedling I've moved into the plant room has bloomed, too.2 That's a lot of seedlings, and a lot of blooms. 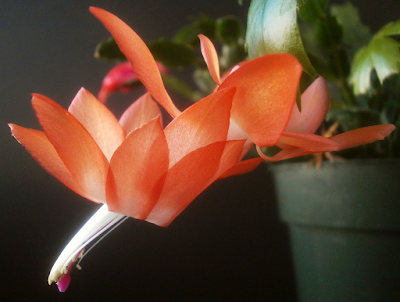 So what I'm faced with now is the question of how to make a larger-than-expected number of more-identical-than-expected seedlings into interesting blog posts while also giving them distinct names. Honestly? Probably not possible. But I should try anyway.

It came down to three possible names: either Circus Peanut, after the weird fluorescent orange candy, Buff Orpington, a yellowy-orangey-brown breed of chicken, or Clyde, after the easily-spooked3 orange ghost from Pac-Man. 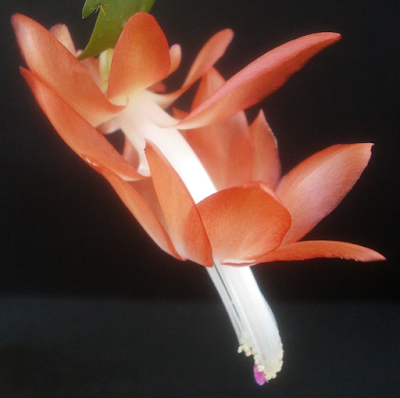 I was leaning toward Circus Peanut for a long time; ever since I found out that the difficult-to-pin-down flavoring in circus peanuts is banana (and verified it by buying and smelling a bag: it's true), I've had weird positive feelings toward them,4 and this bloom is at least approximately the right color and dimensions, if not shape.

Buff Orpington, on the other hand, is funnier-sounding and arguably more memorable.5 On the other hand, the color's less close to the flower (the chicken is usually lighter and/or yellower), which bothers me.

And Clyde? Well, the color's right, and I'm more fond of Pac-Man than I am of circus peanuts, but I'm not crazy about "Clyde" as a name by itself; it needs the Pac-Man context to work. 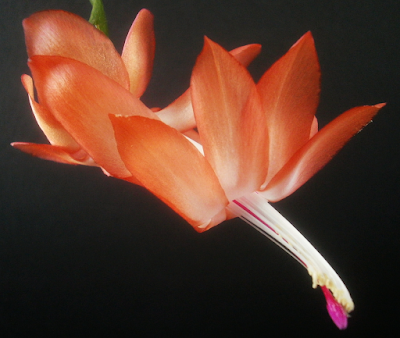 So I guess not Clyde. On the fence about the other two for a long time, asked the husband for his preference, and he said Buff Orpington, which I guess acts as the tiebreaker. So: Buff Orpington, more for the sound of the words than for the color fidelity.


1 Though there are gaps in the numerical sequence. A good chunk of the 40s, 140s, 150s, and 160s are missing because the NOID salmon is a terrible seed parent and produced weird, stunted seedlings that got shaded out easily, or just refused to grow. There have been losses here and there to rot or drought. I sold a few of them at the consignment store without knowing what color they were going to bloom. A handful seemed to react badly to the white-oil spray, back when I sprayed all the plants with it in hopes of leaving the scale no place to hide. But of the 114 original seedlings, sown in 2012, 80 are still with me, and another 10 were sold. That's a 79% survival rate overall.
By contrast, there were 116 Anthurium seedlings sown during the same period, only 36 of which are still around, for 31% overall survival. (Leading causes of death: scale, ugly, weak, dry, rot/wet.) Granted, I'm harder on the Anthuriums, and sometimes throw them out when they're surviving just fine, but even if you add back in the "ugly," "scale," and "crappy" deaths, that only brings them up to 59%. The Anthuriums are just a lot more variable in quality than the Schlumbergeras.
2 Only 8 of the seedlings I've moved up to 4-inch pots have failed to bloom, out of 69 (88% bloom rate). And at least one of those is still trying to: 095 has a bud opening right now.
3 Wikipedia's article for Ghosts (Pac-Man), as I type this, says "Clyde is the Orange Ghost who, in the original arcade game, acts stupid." I feel like maybe there's a more precise and encyclopedia-friendly way of phrasing this, but maybe Wikipedia isn't pretending to have standards anymore?
4 I've always liked circus peanuts, though. I mean, they've never been my favorite candy, but I don't understand people who are all, ugh, circus peanuts, disgusting.
The surge of positive feelings related to circus peanuts is because they make sense, now that I can name the flavor, not that the flavor's suddenly become more appealing.
5 Hypothesis: "orp" is an inherently funny-sounding vowel-and-consonant-blend combination.
Supporting evidence: borp, brorp, corpuscle, chorp, clorp, crorp, D/dorp (it's an actual word), drorp, forp, florp, frorp, gorp, glorp, grorp, horp, jorp, korp, lorp, morp, norp, porp, plorp, prorp, rorp, sorp, schorp, scorp, shorp, slorp, smorp, snorp, sporp, stlorp, storp, strorp, sworp, torp, throrp, trorp, vorpal, warp, yorp, zorp.
Contradictory evidence: adsorption, (in-)corporeal, corpse, doorpost, incorporate, scorpion, Thorpe, torpedo, torpor/torpid.
Ambiguous/intederminate: corpulent, orpiment, porpentine, porpoise.
Conclusion: probably true, but additional study recommended.
Posted by mr_subjunctive at 3:00 AM

Should you happen to get a truly vibrant orange, you might consider "Lucille Ball". Don't recall ever hearing disparaging remarks regarding her. Believe most found her to be a pretty classy lady. Also, she was considered to be a ground breaker both for female comedians as well as for having a show in which a minority person played a leading role.