The best thing Hedda's got going for her is her color; the spathes are a very dark red. That's not my favorite color necessarily, but anything outside of the pink to pinkish-red range is unusual enough to be interesting, at least, if not actually good. 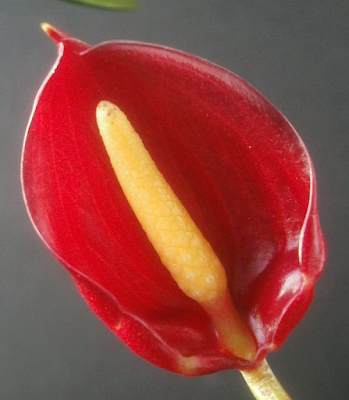 That's about all she has to offer, though. There has only been one bloom so far, and it was very small. I don't remember ever seeing scale, which I suppose is also a good thing, but she gets leaf scarring from thrips anyway, so the foliage is mediocre. 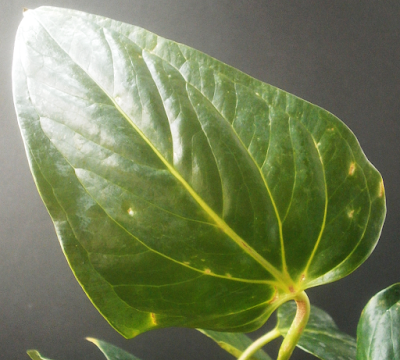 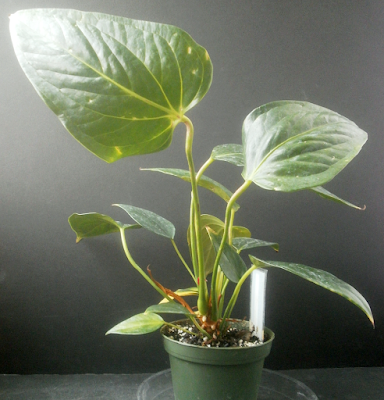 Scarring is harder to see on darker spathes, but as far as I can tell, the thrips are mostly leaving her alone. 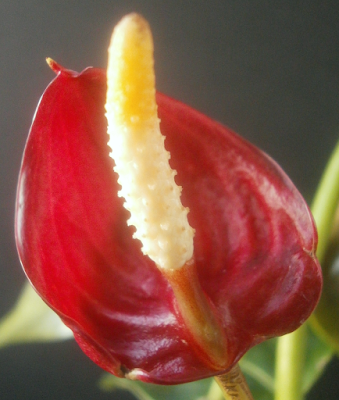 I don't have anything much against her, I guess, and I intend to let her make a second bloom before deciding her fate, but I think she's probably not a long-term resident here, because space has become so limited and there are much more interesting plants around.

And that's all I've got to say about Hedda.

I do have some news you might find a little exciting, though, which is that I've seen buds on three second-generation plants. 0687 Pauline Pantsdown, daughter of 0273 Wes Coast, budded on New Year's Eve, 2015: 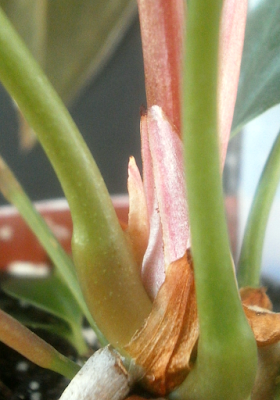 (Though the bud was already dying by the time I took this picture, which is why it doesn't look much like a bud.)
The foliage was somewhat damaged, but had potential: 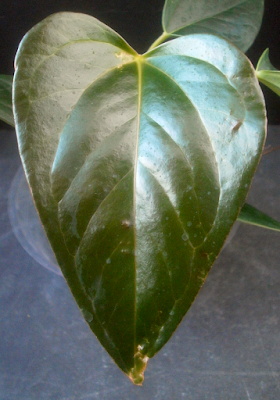 and I was impressed that she was trying to bloom at all, considering how young and small she was: 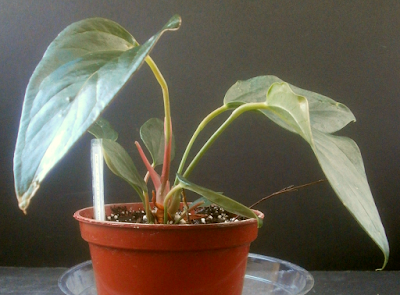 Alas, Pauline is no longer with us, and my notes about what happened conflict with one another, so I'm not sure what actually happened. Since a large number of 0273 Wes Coast's offspring have attracted scale at some point or another,1 I bet Pauline eventually would have too, so perhaps it doesn't matter. But the point is that there was a definite bud, on a second-generation plant, in December.2

Two more second-generation seedlings have budded for the first time in late February: 0716 Herbie Hind (son of 0239 Russ Teanale) and 0805 Triana Hill (daughter of 0234 Ross Koz). All three second-generation seedlings have the same known grandparent: 'White Gemini.' (This isn't necessarily meaningful, but it's not necessarily not meaningful either.) 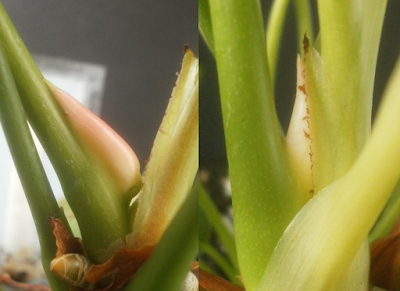 L-R: 0716 Herbie Hind and 0805 Triana Hill, 25 February 2016.
Triana is possibly nothing to get excited about, but Herbie's bud is sort of nice, and I could at least imagine it opening into a nice bloom. We'll see. In both cases, the foliage is a little marked-up, but still slightly better than average, 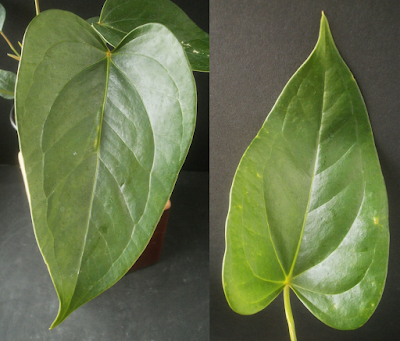 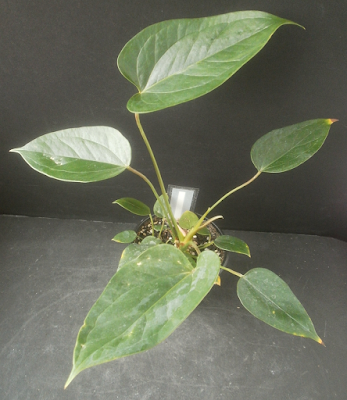 0716 Herbie Hind.
Triana is at least suckering a lot, and doesn't seem too bad. 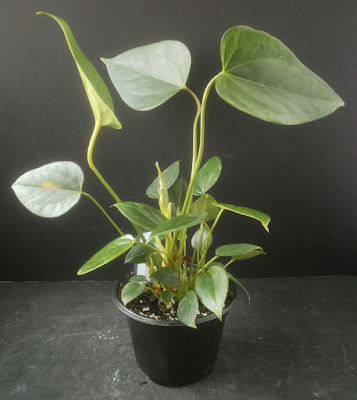 0805 Triana Hill.
Whether Herbie and Triana wind up actually blooming in the next couple months or not, this is still a sign: the F2 show is going to start soon; the stagehands are already pulling back the curtains.


1 So far, Wes has produced 52 seedlings, nearly a third of which (17 of 52) were discarded due to scale. Only 20 survive overall (38%). Without wandering too far out into the statistical weeds, this is a much lower survival rate, and a much higher rate of scale infestation, than other seedlings' offspring have had.
This was especially upsetting to me, because a lot of Wes's seedlings have interesting foliage -- the leaves tend to be very shiny, flat, dark, and about as broad as they are long. They also often had an exaggerated heart shape, compared to other seedlings of the same age. It's possible that a few of those will still be scale-resistant enough to mature and bloom, and if not, maybe another batch of seedlings from some other parent (0273 Wes Coast having died a while ago, due to an accidental uprooting) will replicate their foliage.
2 Which isn't record-setting speed, but out of 177 seedlings to produce buds so far, Pauline was the fifth-fastest. (The other four: 12 months from sow to bud for 0058 Betty Larsony, 14 months for 0415 Darby Dragons, 15 months for 0835 Brenda Dharling, and 15 months for 0282 Dave Trading. Blooming so early doesn't seem to be particularly desirable: Betty's first bud aborted, and then she took a couple years to follow it up with a bud that became an actual bloom, which was pretty crappy. Darby's bloom was fast but awful. Brenda dropped her bud and hasn't produced a replacement yet. Only Dave has produced a normal, reasonably attractive bloom soon after being sown. Also noteworthy: 0835 is so far the only seedling to produce a bud while still in a 3-inch pot; all the other seedlings have waited until they were in a 4-inch pot, at least. Until Brenda, I'd been assuming that it was somehow impossible for a 3-inch plant to bud, so even if she didn't actually bloom, and maybe never will, I'm still impressed with her.) 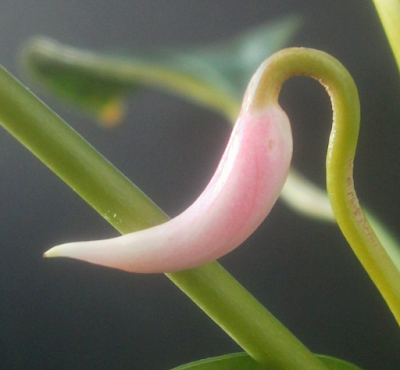