Diane has good points and bad points, definitely an improvement on 0417 Burt Fieder; however, I go back and forth about whether she has enough good points to keep her out of the trash. Her main advantage on Burt is that the bloom color is subtly unusual: 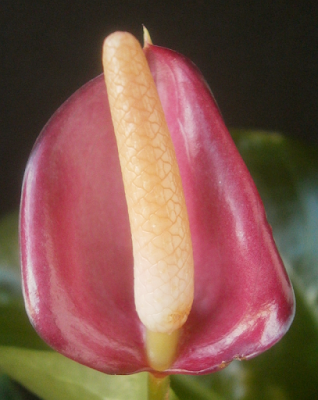 There have been pink-purple blooms before -- 0534 Celia Putty is particularly similar -- but Diane's is a bit lighter and purpler, and her spadix is a little more orange. It's not an amazing color combination, but it's pleasant, and different enough that I consider it unique. So I figure she's earned the right to stick around, at least for a while.

Like Celia (and so, so very many other seedlings), Diane's biggest problem is thrips. The leaves initially improved after I started blasting the leaves with water at every watering, progressing from this 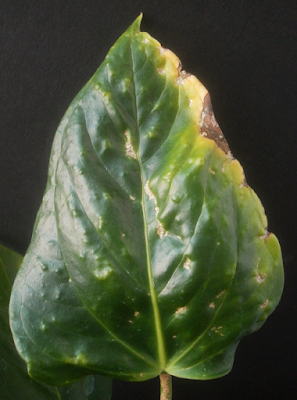 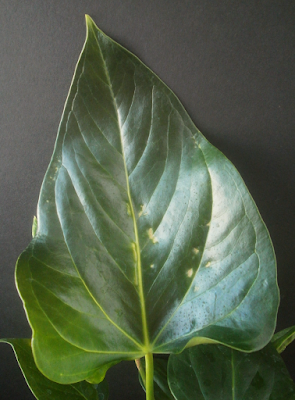 but then they regressed a bit -- the latest leaf hasn't fully unfurled yet, but it's clearly going to be closer to the first leaf photo than to the second.

The blooms aren't improving either. Diane's second bloom looked like this: 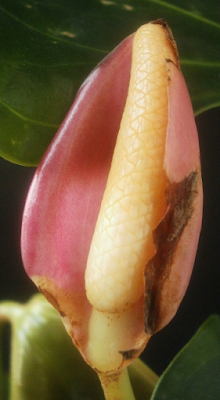 So, interesting color or not, I'm trying to lower my expectations for Diane.

The plant as a whole isn't suckering, but is fairly compact. So that's also sort of mixed. 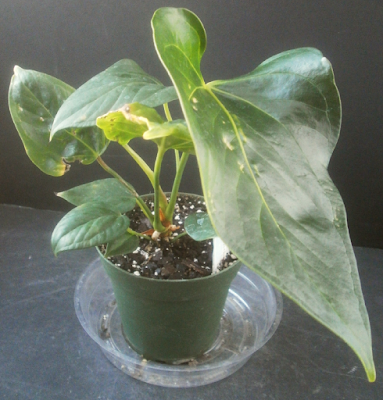 So in the end, I'm not sure about Diane's ultimate fate. I'm definitely keeping her until the berries on the first bloom either ripen or abort. After that? I like the color well enough that I'll probably keep her if I can come up with a way to justify doing so, but I may not be able to if the thrips problem continues to worsen. We'll have to see.