This was the only Masdevallia I saw at the 2016 show, which is a shame. I know they're often not very exciting, by comparison with all the fancy Cattleya alliance orchids, and it's possible that their cultural requirements don't mesh well with those of flashier plants, but I like seeing Masdevallias all the same, and felt a little cheated that there was only one. It wasn't even a particularly good one, in my opinion. 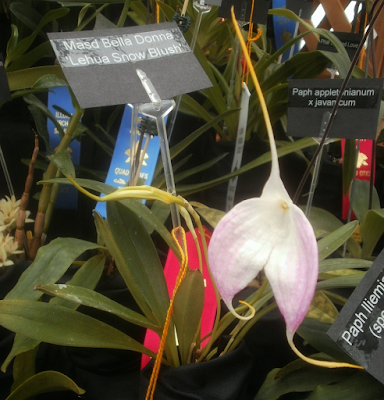 As for the ancestry, Masd. Bella Donna definitely exists, and is

and there's definitely a clone called 'Snow Blush.' But 'Snow Blush' is, as you'd expect from the name, white. It's not clear to me whether Lehua Snow Blush is an actual, official separate clone, but orchidsbyhausermann.com lists it as a separate thing and gives it a HCC/AOS designation besides (Ref.), so . . . probably? Hiloorchidfarm.com shows both white and purple forms of "Lehua Snow Blush," with only the purple one getting an HCC/AOS tag, and I'm not sure what that means -- possibly the color is variable depending on cultural conditions?

I assume the "Lehua" in "Lehua Snow Blush" refers to the producer / breeder Lehua Orchids, but they have, they say, "lost interest in" Masdevallias, so they no longer sell them, and no longer have a page listing their cultivars. They include "Lehua" as part of the name for their two Phalaenopsis, though, so they've named plants partly after themselves before: it seems a safe bet that "Lehua Snow Blush" originated with them even if they no longer acknowledge it on their site.

Masdies rarely have a large presence at shows, IME. Big part of the problem is that most of the really flashy ones are cold growers (highs in the upper 60s- very low 70s. Limits how many folks can grow them and such cold growers often don't handle the warm temps at a show very well.

I rather liked this one, though I'd have preferred the blush to have faded in more gradually.