An update on the Leuchtenbergia seedlings today. I haven't had a lot to say about them because there hasn't been all that much going on. None of them have died since the last update, I think, though I've sold a few. Of the original fifteen, I'm down to seven, and I just moved those up to 3-inch pots on 2 June. (The first one of those I did may have been damaged in the process: the roots had stuck hard to the side of the pot, and I couldn't figure out how to get them out, so I tried jamming a thin metal rod in through the drainage hole, which broke the tip of the root because the root was right on top of the hole. I figured out how to get them out with less trauma after that, but until I did that first one, I had no idea what sort of roots I might find. 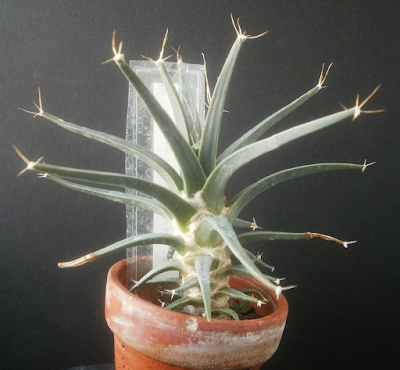 Seedling no. 2. Pot is 2-inch (5 cm) in diameter.
The seedlings don't look much like the young plants I've seen occasionally in stores, like these: 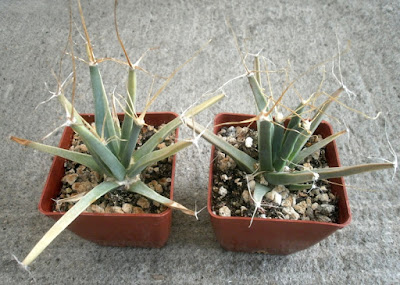 Specifically, my seedlings have more of a trunk on them already, and the leaves are curved instead of straight. Both things are probably due to me not having quite enough light for them, though I'm not sure. In their natural habitat, they're often shaded as seedlings, so they really ought to be more flexible about this than a lot of other cactus seedlings might. I don't know. 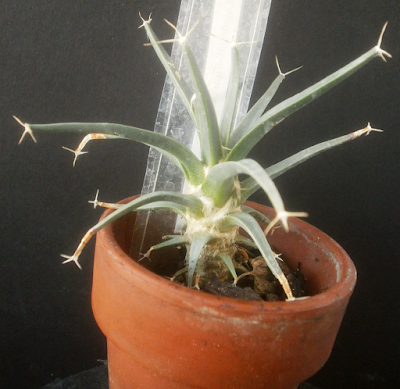 Seedling no. 6. Pot is 2-inch (5 cm) in diameter.
In any case: still here, doing fine. They've possibly sustained some thrips damage on the upper surface of the leaves; a while back I noticed that there were little scars appearing. I haven't actually seen thrips on any of them, and you'd think the seedlings' skin would be too tough for thrips, but that's the only explanation I can come up with. I've heard tales of woe regarding Leuchtenbergia and scale, but so far, I haven't seen scale on them. The species of scale I've been dealing with here seems to be particular about which plants it likes to eat (Agave, Yucca, Anthurium, Aloe) and which plants it doesn't (Dracaena, Coffea, Spathiphyllum, Schlumbergera), so maybe scale in general are a problem for Leuchtenbergia, just not my personal pet scale. 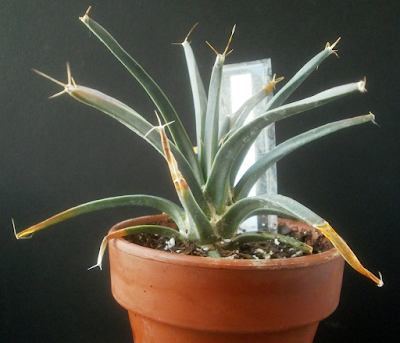 Seedling no. 12, after the repotting. Pot is 3-inch (8 cm) in diameter.
I started these seeds in May 2013, getting the seeds from an on-line supplier, so seedlings are just over three years old now. I've also cross-pollinated two adult plants in 2013. Both plants produced fruit, though I think I only collected seeds from one: I can't remember. In any case, I still have lots of self-produced seeds, in addition to the leftover online seeds, and I've thought about trying to start the self-produced ones outside this summer, but I'm not sure what I'd do with them all if they germinated. The species is an acquired taste, and not in particularly high demand, so although the seeds cry out to me to be sown (as all seeds do), I can't come up with a perspective that makes me feel like it would actually be a good idea to start them. So we wait.

Sad to report that the one I got from you was discovered by the young cats and ended up as a cat toy, lost under the bed.

I found it, repotted it, moved it, cats found it again, repeat.

In the end the cats won. They don't bother many house plant but that one was clearly possessed by a demon and had to be destroyed.

Perhaps the commercial seedlings are pumped with fertilisers and water a bit more than yours?