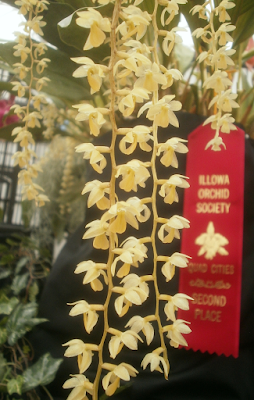 Though the individual flowers aren't particularly beautiful, the sheer number of them is striking. 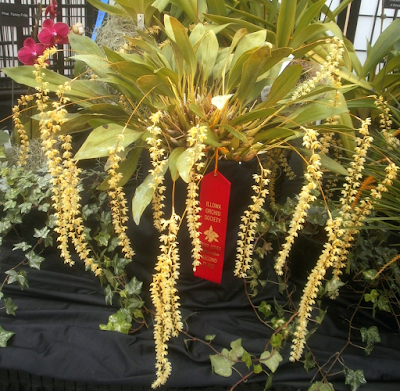 In other news, one of my five Amorphophallus tubers has pushed above the soil line, finally. They're all running very late this year, which makes me either anxious or angry or both, depending on how responsible I feel for the delay. 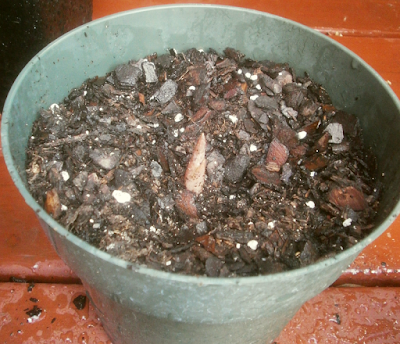 I've also recently discovered the Amorphophallus offerings at Plant Delights Nursery, and am very tempted by A. henryi and A. ongsakulii in particular. Any readers have experience with either of these?

Failing that, would anyone like to try to reassure me that the rest of my A. konjac (plus one A. bulbiferum) bulbs still intend to do something?

I would gently dig around the top of the bulb to check for root growth/if the bulb is rotting. I have also noticed that they seem to need warm soil to get going. If the bulb is healthy, it should eventually grow.

Just to totally paralyze you (except that I am not sure the corms can be imported easily to the US, there are some as seeds), have you seen the selection at Rareplants?

Well, I dug down into the soil to check them a couple weeks ago, and they were all intact then. A couple days ago I dug a short distance down to see what was going on with the four that hadn't sprouted yet, and one of those was very close to appearing above the soil; I didn't make contact with the other three because I didn't want to dig too hard and risk damaging them or something. It has seemed like this summer's been cooler than average, though I don't know whether that's officially true.

Well, it looks like they do ship corms to the U.S., but I'm not that tempted: with the shipping, it's considerably more expensive than Plant Delights (even allowing for the Euro/dollar exchange rate), and there are no pictures of the foliage that I could see. I realize the flowers are the variable, interesting parts, but even so, I'm going to see a lot more of the leaves than I will of the flowers (or at least that's been the case with A. konjac and A. bulbifer: no flowers on either one yet), so I'd like to know what they look like.

That site did solidify my interest in A. henryi; not only does it offset abundantly, but it's one of the few species which is self-fertile, and the cherry on top is that the berries are blue. I mean, I'd be a fool not to, right?

I bought the A. konjac from Plant Delights last year and stored the pot in my garage over the winter. I set it out in the spring and nothing for weeks, thought I had killed it but then it started to poke out of the dirt. After it grew several inches, it really took off and it is bigger than last year and there is a little baby one that popped up. I thought mine was slow to take off too but maybe that is normal? I don't know, this is my first Amorphophallus. I live in zone 7 and it is fully leafed out now.

The impression I'm getting is that Amorphophallus will begin growing when they begin growing, and if you're lucky, the growing period will align with the time of year when you can put them outside. Last year, one of them poked above the soil in April; this year, I didn't see anything until July. Some species are supposedly more consistent from year to year than others (if I remember correctly, A. konjac is supposed to be one of the more consistent ones), but the problem is that unless one digs up the tuber to check it, being late and rotting look exactly the same.

This is the reason why plants with firm dormant periods (Cyclamen, Caladium, Zantedeschia, etc.) have always kind of intimidated me, and why I held off for such a long time on trying them at all. Since I have tried a few, and we're here anyway, I may as well report:

• I've only tried Cyclamen once, and I'm probably not going to again.
• I bought a Caladium once but didn't try to overwinter it, assuming that it was a lost cause. Probably should have taken the chance.
• The first Zantedeschia experiment is only a couple weeks old, but it'd been going pretty well until last night, when the huge Ficus benjamina got blown over on top of it. I assume the Zantedeschias will probably survive, but they don't look nearly as pretty anymore.
• Amorphophallus is pretty easy, albeit irregular enough to be nerve-wracking, and A. konjac seems to roll with the punches better than A. bulbifer.
• Clivia doesn't appear to always need a dormant period: some years they've started throwing leaves after I watered in the winter, and other years they haven't. The seedlings from 'Aztec Gold' haven't gone dormant yet, and they're three years old now.
• Hippeastrum insists on a dormant period, but is also pretty clear about when the dormancy starts and stops, such that I can tell whether I should be watering or not.

This is quite late for konjac but a cool summer might indeed be the prob. I potted mine in April this year (I store it as a completely bare/naked corm in an open box every winter). Despite a far earlier potting up than I normally do, I still didn't see it break ground until a week or two ago. I've been wondering in the sporadic cool nights have had an effect. In any event, once they break ground, they generally grow quite quickly. Yours should be fine.