(Video may be barely NSFW, due to one word.)

I spent all day Friday upset. Again. And I'm torn between using this post to say look, not everything is awful, there is still beauty in the world, on the one hand, and being so rage-depressed about my country that I rant-sob at you for several paragraphs, on the other.

And why yell at you? You didn't kill anybody. You're probably as upset about it as I am (if you're American, anyway; I wouldn't expect non-Americans to care as much). You don't have any more power to change this than I do, or have secret knowledge about how to turn everything around.

So I think I'm going to split the difference and just stop talking.

Here's your stupid orchid. Don't you dare find it comforting. 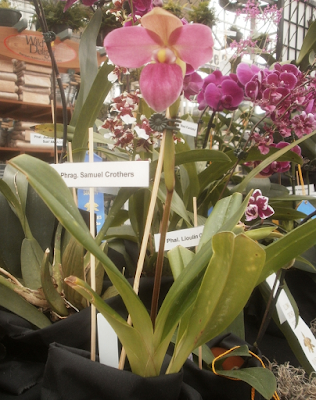 It's been bad, yes. But taking comfort in, and gaining strength from the beauty of nature...how can that be wrong? One must be strong, to take positive action.

I keep thinking about how I can't even imagine what it must be like living the US. Even just hearing the news from over here, it's terrifying and depressing and it's making me feel so helpless, because there's nothing I can do.I mean, I don't know what I would do if I was there, but there must be something. But from a different country, a different continent?

(And so endlessly baffled by how, as I was growing up, America was always held up as the big thing to aspire to. And the older I grow, the more it seems like dystopia instead.)

Well, America's always been a dystopia to some degree or another for certain segments of its population: if you're poor, non-white, LGBT, an immigrant (legal or not), non-Protestant, female, mentally ill, disabled, very young, very old, non-speaker of English, etc., things have been pretty bad for your group at one time or another.

The good news is that it does seem to be getting better -- in fits and starts, and with occasional reversals, but nevertheless -- and although one wishes we could do it without having to kill a lot of people first (see: Civil War, AIDS crisis, slavery, basically everything that happened to Native Americans ever, civil rights movement, etc.) more often, it's probably still better to see things as they are than to see things as we'd like them to be.

When I wrote this post, it was Friday, the day after the Dallas shootings, and there was every indication that things were about to get much worse. That hasn't happened so far. (I'm extremely worried about the Republican National Convention next week, because it looks like Cleveland is going to be a powderkeg of armed people who are very angry at one another and I don't see, realistically, how we get through those three days without somebody being killed as a result of the convention, but the Black Lives Matter stuff appears to be going reasonably well so far, save for maybe Baton Rouge.) I figured police would be even more angry at black citizens, and looking for revenge, and the whole thing was going to heat up a lot more than it already had been, but the protests I've actually heard something about (St. Paul, Memphis) seem to have gone okay, and appear to be taken seriously by at least some of our elected officials. Hopefully that continues and things actually change.

I was also probably primed to respond really badly because I hadn't fully processed the Orlando shooting, not even a month before. (Nothing much seems to be happening as a result of that, yet, and in fact the Republicans are trying to find new ways to sneak in anti-gay discrimination, but fish gotta swim.)

It's not an easy time to find room for political optimism in the U.S. It's also intermittently really scary. But at least I, personally, am feeling better, and I've worked my way up to "maybe not entirely hopeless."

I don't see taking comfort in nature as a bad thing, of course. I guess my deal with this post was that I'm really angry about this, about Philando Castile, Alton Sterling, and the many other men and women who have died unjustly and avoidably at the hands of police. And it would be fairly easy for me to calm down and relax about it because it's not likely to affect me directly, but I don't want to. I want to be angry. It's outrageous that this happens at all; it's obscene for it to be happening three or four times a day.

I mean, I don't actually know what to do about it, how to turn this anger into anything useful (any readers have suggestions?). And it's possible that I'm conflating "relaxed" with "unconcerned" too much in my head. Obviously one can take care of oneself and enjoy nature and etc. and at the same time care deeply about, and be working toward, fixing societal problems.

I don't know. It's complicated, and I'm probably not going to work through all my feelings and explain them here in a single blog comment so I should probably stop writing.