I love the idea that "Chandelier" is a suitable drag queen name. I mean, of course it is, obviously it is, but I would never have thought of it.1 I don't know much about the queen herself; I found one video on YouTube, but the audio quality is really bad. She looks good, though.

Anyway. Chandy's one of the better recent seedlings, though unfortunately not in a way that carries over well to photos. 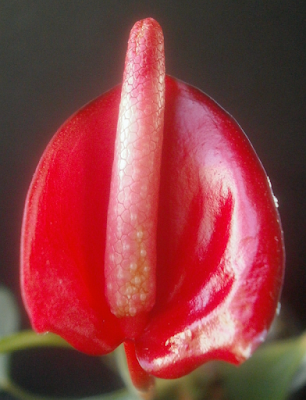 I'm not sure what the problem is, or how even to describe what's missing from the photos. The photos always wind up making it look like the saturation's just been turned up too high, somehow; in person it all but glows. 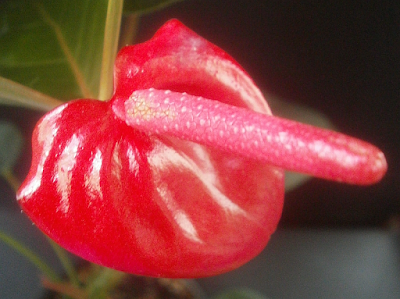 And that's a terrible description. But it's as close as I can get to an explanation. For purposes of the post, I've tried to tone it down enough for the spadix color to be clear, because I think that's a lot of the magic here -- it's not just the color of the spadix, but how close it is to the spathe without quite matching. 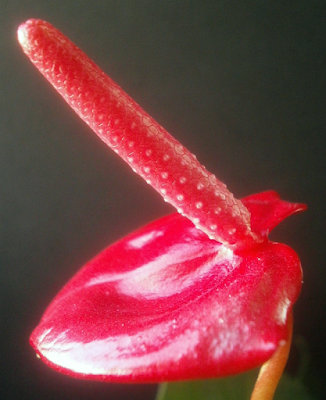 Anyway. Very excited about Chandelier, even if I can't show you exactly why. She also happens to be pretty resistant to thrips: though there are spots on both the spathe and spadix, they're hard to see, and the leaves are decent. 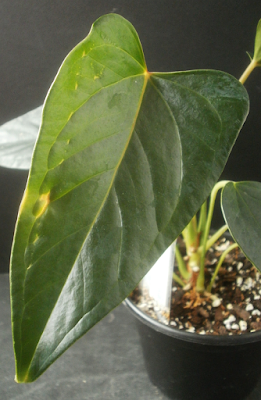 For the record, I don't know what's going on with that leaf's left side for sure. Looks like it maybe got creased before it unfurled, or something like that. I don't think it's a bug problem. 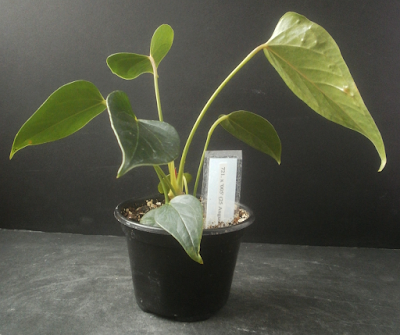 So anyway. Definitely a keeper, not even a question.

This might be a good moment to note that I've also figured out a way to claim a quarter-shelf for 6-inch Anthuriums. After agonizing over who would get promoted into bigger pots for a while, I settled on 0105 Deanne T. Christ and 0694 Brad Romance.2 I hope to be able to shift plants around a little more in the next few weeks, but it's difficult, since things got cold enough here last week that all the outside plants had to come in.3 If I can make more room, 0723 Tara Dactyl and 0716 Herbie Hind get the next two spots.

Oh, one other thing -- Chandelier Divine Brown is the last of the seedlings from 0005 Chad Michaels to bloom, so here they are all together, for comparison purposes: 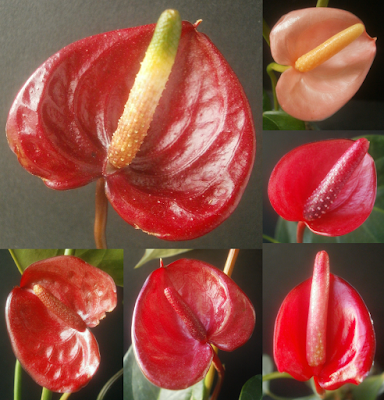 
1 My made-up drag queen names tend to be entirely pun-based. I dare say they're (occasionally) clever and fun, even. I've tried coming up with a list of names like Chandelier, where they're plausible as drag names even though they're not used as given names, but it turns out that even when you find a word that works, it's really hard to come up with a surname for it.
Not that they all need surnames; in the course of writing this, I decided that "Baguette" was probably fine as a mononym. But one can only pull the mononym trick so many times.
2 Deanne because the purple ones are rare, and take priority automatically whenever they appear; Brad because he's both very pretty and very huge: if I didn't up-pot Brad soon, I was worried that he was going to outgrow his spot. Unlike some of the other really huge plants, Brad doesn't have unusually big leaves, at least not yet, but he takes up a lot of room, because his peduncles and petioles are unusually long. I kind of hope the leaves do get huge sooner or later, both because it would make the plant seem more in proportion to itself, and because the seedlings with huge leaves (0408 Tex Messich, 0334 Jean Poole, 0360 Heidi Gosique, 0314 Camille Yen, 0083 Carmen Adairya, 0330 Faye Quinette) often wind up being my favorites.
3 Almost all. I'm still trying to decide whether two of them get to live through the winter or not. A little frustrated with them for not just dying already and taking the decision out of my hands.
Posted by mr_subjunctive at 3:00 AM

Re: Color- could it be that you're trying to describe the faint iridescence that happens right under the top layer of cells? (It's really obvious in African Violets in person, but is impossible to photograph.)