Yellow-brown is, as noted in a previous post, an allowed color for jade, so I suppose technically I have to be okay with a yellow-brown flower named "Imperial Jade." 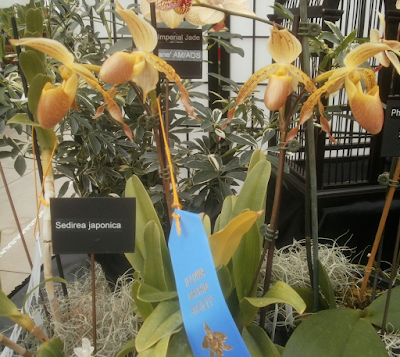 But secretly, deep down, I am not okay with it.1 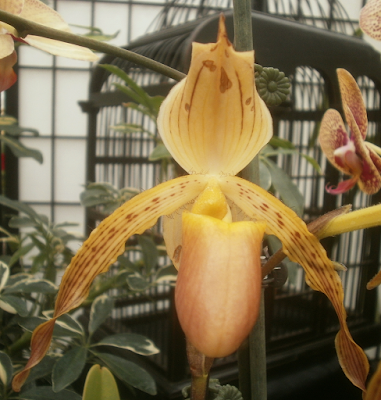 Imperial Jade is a primary hybrid (hybrid of two species, as opposed to a hybrid of a species and a hybrid, or a hybrid and a hybrid):

I haven't seen Imperial Jade before, but I've seen some of its relatives. Related on the Paph. stonei side is Paph. Lady Isabel (from the 2013 show), which is also a primary hybrid. On the Paph. primulinum side of the family, we've seen Paph. primulinum itself (2016), Paph. Pinocchio (2013), and Paph. Prim-N-Proper (2012). I don't feel like Imperial Jade particularly resembles any of its relatives, but I suppose you can decide about that for yourself.


1 (I realize I have no room to point fingers about color accuracy in plant names, considering how some of the Schlumbergeras have behaved.)
Posted by mr_subjunctive at 3:00 AM