This one is at least kind of novel. 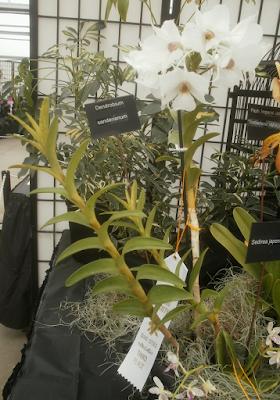 The camera had trouble with it (mostly-white flowers on a mostly-white background), but you can maybe kind of get the general idea anyway. It was tagged as Dendrobium sanderianum, but D. parthenium is, or at least was for a brief period last March, the correct name. Most of the photos that come up on-line for the species show a prominent purple throat on the flower (e.g.), as opposed to the greenish-yellow with a few thin reddish-purple lines here; a substantial minority are pretty uniformly white (e.g.). 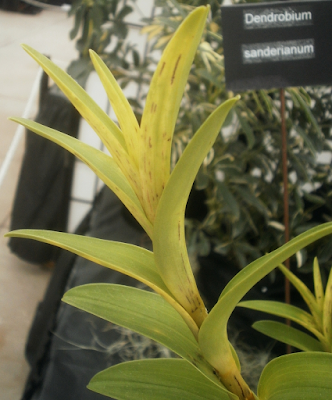 The streaky leaves were interesting in person; I don't think they're actually supposed to look like that, based on the photos I found in image searches, but I don't know what would cause the streaks. 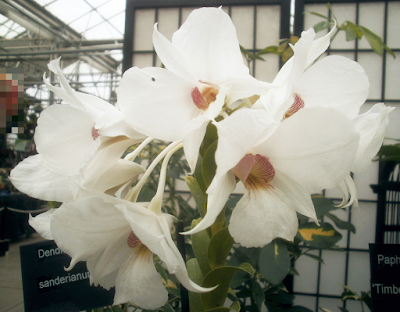 As far as I'm aware, Den. parthenium isn't related to any of the previous orchids I've posted about on PATSP, but it wouldn't necessarily surprise me if it were. I haven't always bothered to go into orchid genealogies at all, and I've only rarely followed the trail all the way back to the original species, so I wouldn't be surprised to find some Den. parthenium connection in the previous orchids if I were to look hard enough. All I know for sure is that there doesn't seem to be a connection to any of the Dendrobiums I did bother to investigate.