067A is Cyndi Lauper, who's already had a pretty good year, and is plausibly even a replacement for 083A Psychedelic Bunny, should anything happen to 083A. 067B, on the other hand, is a pretty ordinary orange/white. Nothing wrong with it, but I have plenty of those already, and the only interesting thing about it is that it sometimes shows up in photographs as a little lighter orange than the usual orange/white. 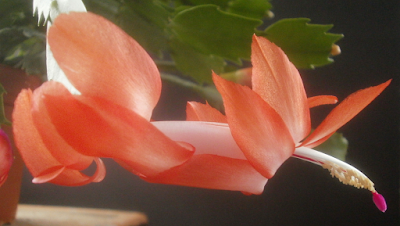 Arcturus is the star in the constellation Boötes. Wikipedia says it's red (in the Arcturus page), though it also says type K stars are orange (in the stellar classification page), so it may not be the best choice for an unambiguously orange seedling, but whatever. The best bit of information from the Arcturus page is that the Mi'kmaq people of eastern Canada called Arcturus Kookoogwéss (the owl). One is tempted to change the name to match, but that accent mark makes it tough to type, so I'll stick with Arcturus. Previously considered and rejected for 056A Demons Begone and 015A Nielub.

Clyde is the orange ghost from Pac-Man,1 and was previously considered and rejected for 058B Buff Orpington and 200A Breakin' The Law.

Discretion is a roundabout reference to the bloom color: rather than being a loud, screaming orange, it's a softer, less saturated color. Orange is never exactly discreet, but compared to some of the other orange-bloomers, and certainly compared to 067A Cyndi Lauper, 067B is trying not to call too much attention to itself.

I no longer remember why Seeking Guidance seemed appropriate enough to add to the list. Maybe this is also a reference to the color being relatively light and washed-out? I suppose it's always at least a little bit appropriate. 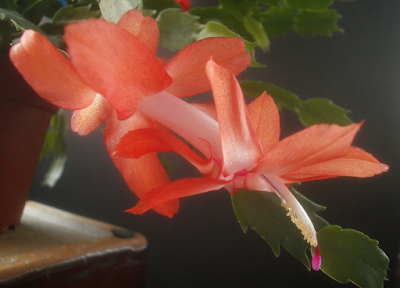 So okay. Well. Since the reason for including Seeking Guidance is no longer apparent, I guess I can drop it. If it was a really good name, presumably I would remember why it was on the list. And Arcturus would be a much more appealing name if I knew what color Arcturus actually is.

So the choice is Clyde or Discretion, and since I have some doubts about whether the lighter blooms that inspired Discretion are going to continue. Therefore Clyde.


1 In Ms. Pac-Man, the orange ghost was "Sue."
I recently learned that Sue was named for the sister of one of the guys who developed Ms. Pac-Man. There's a lot of interesting Ms. Pac-Man-related stuff in that article, if you're the sort of person who can find Ms. Pac-Man history interesting.
Posted by mr_subjunctive at 3:00 AM

The 'tube' on Seeking Guidance' looks a little longer than the norm to me.
Could just be the photo; I suppose.

I wound up not using Seeking Guidance as a name; all the photos in the post are of the plant that wound up getting named "Clyde," though they're different blooms.

I suppose I should be clearer about how the naming process works.

I see what you mean about the longer tube in the last photo (the first one looks longer than usual as well, as far as that goes); I'm not sure if it actually is or just looks that way from the photo. It'd be interesting if it were a consistent, genetically-determined trait that I could select for. I suppose first I'll have to wait for more flowers, to see whether it's real or just an odd camera angle.