Not much to say about Arya (but keep reading anyway, 'cause at the end I'll talk about a different, more interesting seedling). Her seed parent was 0234 Ross Koz (red-purple spathe, yellow spadix). I understand that the pollen parent is contributing genes too, and therefore I shouldn't expect the seedlings of a given plant to all look the same, but it still surprises me to get this 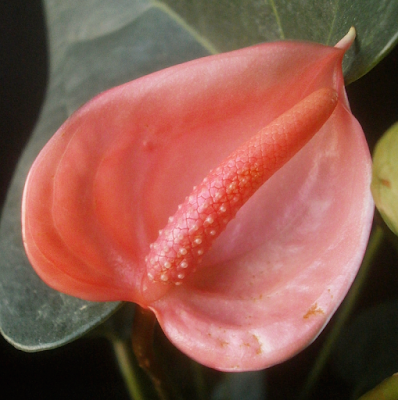 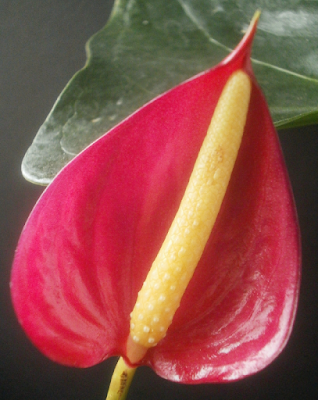 0234 Ross Koz.
I wish stuff like that would happen more often with the Schlumbergeras.

This spathe color is similar to 'Orange Hot,' though a bit lighter. Presumably that's where the color comes from; I've seen it in several other seedlings by now. Though I think Arya is unique in having a matching spadix; all the other peachy-orangey-pink spathes have come with yellow or light yellow spadices. 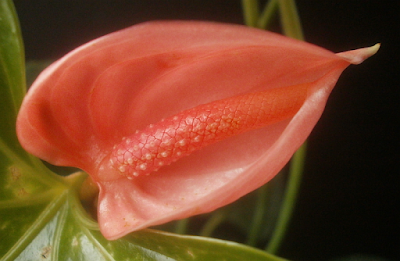 and finishes more pink than orange. 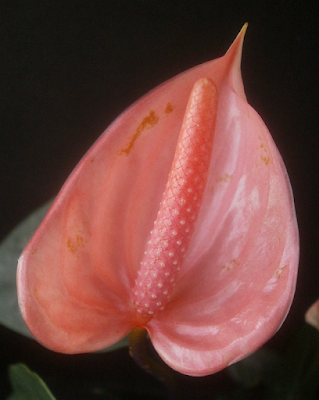 Also you can see the thrips really like her. The leaves are nice, though: large and mostly unblemished. 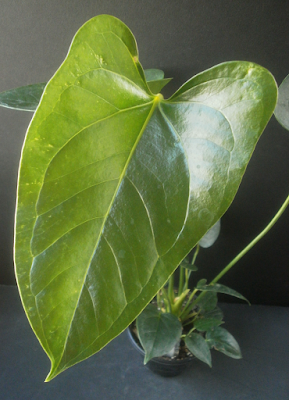 And she seems to be suckering okay. 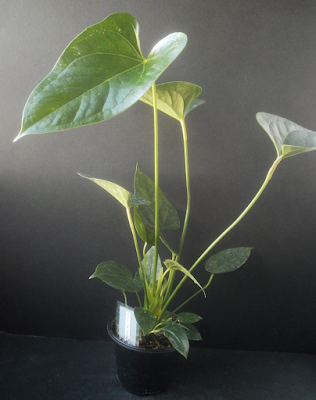 So I'll probably keep Arya a while longer, as long as she doesn't develop new problems on top of the thrips.

The other seedling I want to talk about is 1299 Sinthia D Meanor, which fell apart just before opening a first bloom. Since I'd teased you earlier with talk about Sinthia doing a new bloom color, and since the bud got far enough along to be able to tell what color it was going to be, I figured I should go ahead and reveal it even if I don't have an actual full bloom to show. Here's Sinthia: 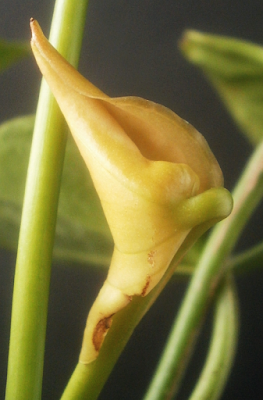 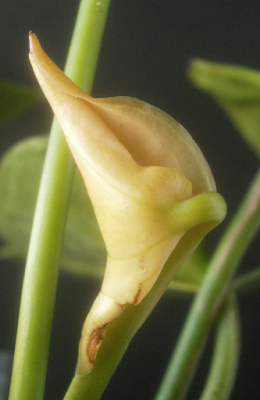 In person, that's a sort of muddy tan-yellow, a little closer to the second photo than the first. The spathe uncurled enough before dying that I could see a tiny sliver of the spadix; what I could see was light yellow.

So it appears that it's possible to get to a yellow(ish) spathe through breeding alone, presumably a combination of a very light green pigment (which came from the seed parent, the NOID red) with a very light orange pigment from one of the oranges. Averaged out, that would yield the muddy tan-yellow we see here.

Obviously I would rather have an actual open bloom to show you, but since it looks like it's going to be a while before Sinthia tries again, I figured I may as well show you what had happened so far, since it's pretty interesting news either way (if you're the sort of person who finds unattractive but unusual spathe colors interesting).

How did 'Arya Reddy' get this very Indian name? Maybe I missed a post about its naming...

Perhaps I am unsophisticated but I like them both... Glad to see more pictures of the anthurium seedlings again!

She just wants to know if you're ready. Not really a story to it.

The Schlumbergeras have done a lot more first-time blooming than I was expecting this year (and they're still going -- I have one that I think will open its first bloom April 25, which is awfully late), so the Schlumbergera posts are going to last at least into July, but you'll see more and more Anthuriums showing up over time.