After the mess of naming 089B Haunted Houseboat, I'm apprehensive. Let's see how it goes.

It wasn't an especially good seedling: I think it only produced the one bloom, it's a boring color, and consequently I wasn't looking terribly hard for good names for it. The finalists were: Europa, Snezhana, White Album, and Whited Sepulcher.

Europa is a lot of different things, but I was thinking of it mainly as the moon of Jupiter or the figure from Greek mythology. It's a pretty neat moon, as moons of the solar system go;1 the mythology is, as with most Greek mythology, pretty bizarre-sounding: Zeus takes the form of a white bull because he's hot for Europa (a Phoenician woman), she sees the bull and is like, whoa, what a hot bull, and climbs on top of him, at which point Zeus runs to the sea with her on his back and swims to Crete, reveals his true identity, gives Europa some magic shit, and makes her the queen of Crete.

Snezhana is a Slavic, Circassian, and Lithuanian feminine given name, which Wikipedia thinks probably derives from the words for "snow" and "woman." I find it a pleasant-sounding name, and it seems appropriate enough for a white flower, so why the hell not, right? 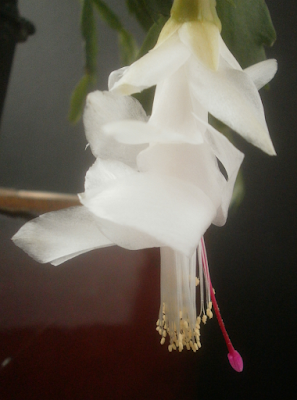 White Album could be taken, I guess, as the Beatles album from which we get "Dear Prudence," "Ob-La-Di, Ob-La-Da," "Happiness Is a Warm Gun," and "Helter Skelter." If you want to, that is. For me, it's more a not-very-well-thought-out pun on the meaning of "Album" ("white," in Latin; the story of how it came to mean record album, when records were mostly black, is complicated). But think whatever you like.2

Whited Sepulcher is Biblical, from Matthew 23:27. In the New International Version: "Woe to you, teachers of the law and Pharisees, you hypocrites! You are like whitewashed tombs, which look beautiful on the outside but on the inside are full of the bones of the dead and everything unclean." (Jesus was so judgey.)

So. Timely though Whited Sepulcher always is, and as amusing as I find White Album, it feels slightly tacky or something to use the bloom color as part of the name. Plus the former's pretty hostile. And it's not even necessarily certain that future blooms will be white, considering how the seedlings have collectively behaved this year. 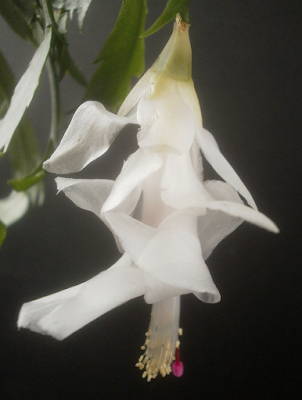 Which leaves Europa or Snezhana, and I feel like Snezhana has to be white more than Europa does: snow's pure white, but Phoenician women were presumably not. I mean, the part everybody remembers about the story of Europa is the white bull, but the point is that I feel like Europa gives me more leeway if the color's different next year. So: 190A Europa.

It turned out that actually I hated Europa as a name for this particular seedling, so I took the unprecedented step of changing a name after it had been officially decided. 190A is now 190A Snezhana instead.


1 Though my heart will always belong more to Jupiter's Io and Neptune's Triton. In fact, I kind of wish we could get a rover to drive around on Io and take some pictures, 'cause I bet they would be metal as hell. There are a lot of reasons why we're unlikely to do that -- the surface contains lots of reactive chemical compounds, and charged ions; it's both very cold (most of the time) and very hot (at the volcanoes), and there's intense radiation from Jupiter. Hard to build a robot that could do anything in those conditions. But I keep hoping.
2 I looked at the Wikipedia track listing for the White Album and was like, ennh, probably not my favorite, I should look at some of the Beatles' other albums to see which one has the songs I like best, and then I can make a throwaway comment about being more of a Revolver man, or whatever. But after looking at the track listings, I think maybe I'm just not a Beatles man. Which is weird, 'cause . . . I kinda thought I was?
Posted by mr_subjunctive at 3:00 AM

Perhaps actually listening to a few Beatles tracks will remind you? I just tried it and it took me straight back to my 20s. Though I was quickly distracted by the Barcelona Gipsy Klezmer Orchestra.