I'll spend most of this post talking about something only tangentially related to Jessica, but let's evaluate her first.

The blooms are okay -- the shape and color are fine, and although the thrips don't exactly leave the spathes alone, the damage shows up less on this color. The blooms are pretty small, so far, but several of the other seedlings produced bigger inflorescences after they were moved to a bigger pot (most notably 0360 Heidi Gosique, whose spathes are among the largest in the whole group of seedlings now: her first blooms were merely average). I don't feel like I necessarily need another red/red so badly that it's worth the space a larger pot would take, but the point is that Jessica's not to be dismissed just for having small spathes. 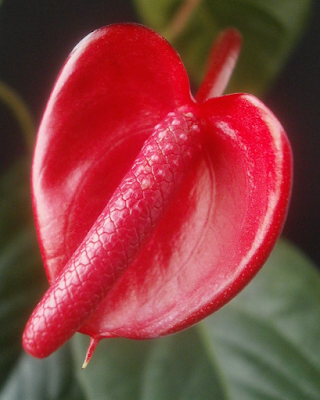 Mostly the same story with the leaves, though the leaves are pretty large, which is another reason to think that the blooms would get bigger under the right circumstances: 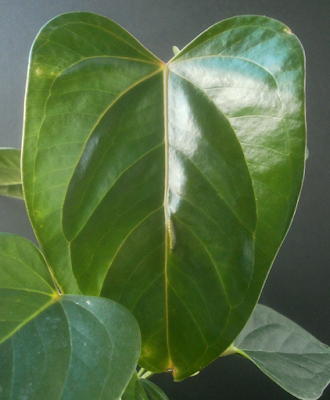 A little thrips damage here and there on the leaf, but we've seen worse. And the plant as a whole is okay. 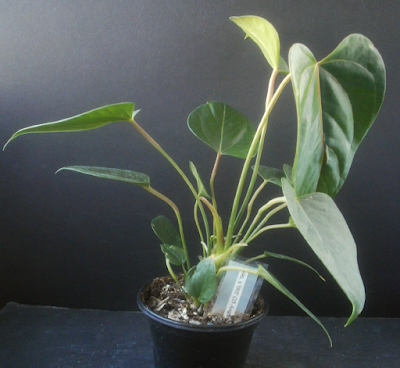 For the moment, I think the plan is to hang on to Jessica and see what she does next. So far, I've only seen two blooms, and there's no big hurry to throw out a bunch of seedlings at the moment, so there's still time for her to do something impressive. 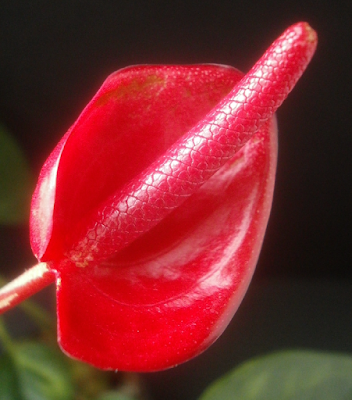 Meanwhile, I was bored last Saturday, and one thing led to another, and wound up plugging various things into a Markov chain text generator and saving the outputs for several hours. At this point you may be asking yourself, what is a Markov chain text generator? It's actually surprisingly difficult to explain, and the Wikipedia article has a lot of math in it which I, frankly, do not understand. But it's basically a simple computer program that takes a bunch of input text, and then tries to generate more text like the input text, by looking at what words or letters tend to follow other words or letters. Like, suppose you input the months of the year, in English:

The program will look at what letters tend to follow other letters -- for example, two months begin with "ju," three months end with "ary," three other months end with "ember," that sort of thing -- and then starts generating words based on that. Given the first letter "m," for example, a Markov chain text generator that's only looking at one letter at a time will follow that "m" with an "a" some of the time (following the examples of "march" and "may"), and "b" some of the time (following "september," "november," and "december"). And then once the second letter is chosen, let's say it was "b," the next one has to be a letter that follows "b" in the input text, so it could be an "r" (from "february") or an "e" (from "september," "october," "november," and "december"). Repeating that process enough times will give you garbage like this:

If you look at it hard enough, you can piece together how all of those strings of letters happened, based on the input.

You'll also see that sometimes the program recreates words from the input: "july" is in there three times, and "march" is there once.

Some of the online Markov text generators will give you the option to modify the rules a bit -- looking at more than one preceding letter at a time, or whatever -- but that's the basic idea.

So. The point is, I fed a bunch of different sets of text into this particular generator, including a set of proposed and already-used Schlumbergera-seedling names, and a set of proposed and already-used drag queen names, as a way of generating some more ideas to evaluate. Neither set worked incredibly well, to be honest, but I did get a few things that made for plausible names, though sometimes I had to clean them up a little first. It helps that ridiculously long drag queen names are more acceptable than ridiculously long Schlumbergera seedling names. From the drag queens (Anthurium seedlings):

Are they great? Well no, not necessarily (though I find myself weirdly drawn to a few from that list, especially Penne Pilates Las DuBois, Anya L. Sans-Amor, and Lady Bellionzo). And of course there's a lot of chaff to sift through.1 But it's a lot easier for me to go through a list and say no, no, no, maybe, no, yes, no, maybe than it is to come up with a bunch of ideas off the top of my head, so anything that can generate a lot of ideas to evaluate is useful even if most of the ideas are garbage.

I was less successful getting anything useful from the Schlumbergera seedling names because they have to be shorter and make some kind of grammatical sense, but in at least one case, swapping out one word made a name significantly less cliched, and maybe better,2 and there was an amazing, 101-character-long trainwreck: "Varidgy Circelicel Like Charporectuart Prophoreporle It Frogentarich A Wat Casted To The Chably Banja." Possibly (but probably not) useful:

So if you find yourself in need of a way to generate a lot of names for something, and you have some idea of what sort of results you want, and you have the time to look through thousands of garbage results in order to get a few dozen usable items, a Markov chain text generator is one possible tool you have available, along with search engines,3 pun generators, throwing long lists of words at one another randomly and sifting through the results, crowdsourcing recommendations, and, you know, believing in yourself and using the power of your own imagination or whatever.

I should also take the opportunity to draw your attention to Postcards From the Frontiers of Science, a Tumblr blog whose author has been using Markov-like techniques to train computers to come up with band names, action figures for 1980s-era toys, paint colors, recipes, fortune cookie texts, car models, pick-up lines, fruit, knock-knock jokes, and various other things. (The recipes are particularly delightful.)