As of 8 June, the bud on seedling 352 is still there. I still think it's going to fall off before the flower gets around to opening, but I'm less and less certain about that than I was. (The biggest argument in favor of the bud aborting is that I'm starting to be the tiniest bit excited about the possibility of the seedling flowering.)

But anyway. Seedling 202A. The shape of the bloom has me wondering whether the pollen parent might have been Schlumbergera x buckleyi;1 I don't have a way to prove it, but most of the seedlings are bilaterally symmetrical (having a clear left and right side, where one is more or less the mirror image of the other), and 202A, buckleyi, and the one known seedling of buckleyi all look more radially symmetrical (symmetrical along multiple axes at once).2 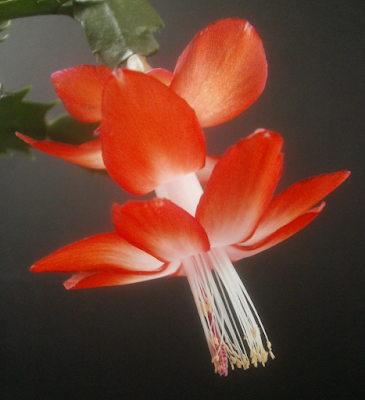 Feeling Gorgeous is what it sounds like. Not sure how it got on the list of prospective names. Joan Didion is a novelist and journalist who I know primarily from her two books of collected journalism (The White Album and Slouching Towards Bethlehem). The Die Is Cast is the English translation of alea iacta est; as Wikipedia notes, it is often used "to indicate that events have passed a point of no return," and I imagine the reader can guess what that might be a reference to. (The Die Is Cast is appropriate to this particular seedling mostly from the way the flower photographed; it looks to me sort of like a comic-book version of the trail left by a die falling through the air.)

Thermite is the general term for a mixture of powdered metal, fuel, and metal oxide which burns briefly at very high temperatures,3 and I was pretty sure it had been considered as a seedling name previously, because it's been on the list of possible names for forever, but apparently it's never made it to the final round before.

I'm pretty comfortable with dropping Feeling Gorgeous immediately. It's not the worst name, but the other three are better. 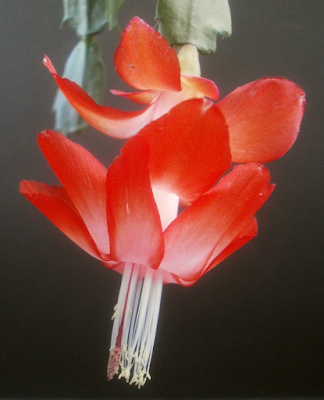 I feel like Joan Didion is the one needing the most explanation. I love the way she writes -- there's always a tension between herself as a dispassionate observer merely recording the scene, on the one hand, and what she actually feels about whatever it is.4 She somehow manages to flip back and forth between the two in a way that seems perfectly natural, which in my case, at least, has a way of drawing me into the subject matter even if it's something I would normally not give a shit about. As an example, here is the second section of the essay "Good Citizens," taken from The White Album (1979):

Pretty Nancy Reagan, the wife then of the Governor of California, was standing in the dining room of her rented house on 45th Street in Sacramento, listening to a television newsman explain what he wanted to do. She was listening attentively. Nancy Reagan is a very attentive listener. The television crew wanted to watch her, the newsman said, while she was doing precisely what she would ordinarily be doing on a Tuesday evening at home. Since I was also there to watch her doing precisely what she would ordinarily be doing on a Tuesday evening at home, we seemed to be on the verge of exploring certain media frontiers: the television newsman and the two cameramen could watch Nancy Reagan being watched by me, or I could watch Nancy Reagan being watched by the three of them, or one of the cameramen could step back and do a cinéma vérité study of the rest of us watching and being watched by one anothr. I had the distinct sense that we were on the track of something revelatory, the truth about Nancy Reagan at 24 frames a second, but the television newsman opted to overlook the moment's peculiar essence. He suggested that we watch Nancy Reagan pick flowers in the garden. "That's something you might ordinarily do, isn't it?" he asked. "Indeed it is," Nancy Reagan said with spirit. Nancy Reagan says almost everything with spirit, perhaps because she was once an actress and has the beginning actresses's habit of investing even the most casual lins with a good deal more dramatic emphasis than is generally called for on a Tuesday morning on 45th Street in Sacramento. "Actually," she added then, as if about to disclose a deligthful surprise, "actually, I really do need flowers."

She smiled at each of us, and each of us smiled back. We had all been smiling quite a bit that morning. "And then," the television newsman said thoughtfully, surveying the dining-room table, "even though you've got a beautiful arrangement right now, we could set up the pretense of your arranging, you know, the flowers."

We all smiled at one another again, and then Nancy Reagan walked resolutely into the garden, equipped with a decorative straw basket about six inches in diameter. "Uh, Mrs. Reagan," the newsman called after her. "May I ask what you're going to select for flowers?"

"Why, I don't know," she said, pausing with her basket on a garden step. The scene was evolving its own choreography.

"Do you think you could use rhododendrons?"

Nancy Reagan looked critically at a rhododendron bush. Then she turned to the newsman and smiled. "Did you know there's a Nancy Reagan rose now?"

"Would the . . . the Nancy Reagan rose be something you might be likely to pick now?"

A silvery peal of laughter. "I could certainly pick it. But I won't be using it." A pause. "I can use the rhododendron."

"Nipping a bud," Nancy Reagan repeated, taking her place in front of the rhododendron bush.

"Let's have a dry run," the cameraman said.

The newsman looked at him. "In other words, by a dry run, you mean you want her to fake nipping the bud."

That's a long quote, I'm aware. But it illustrates how Didion is able to on the one hand describe the scene in an objective-seeming way -- by the time you're done, you know how many people there are, something about their motivations, what they were physically up to, what they were holding, etc. -- while at the same time having her own personal feelings about the scene lead you to the desired conclusion. Nancy Reagan is is acting (to the point of taking direction from the newsman and cameraman), is trying too hard, is not a serious person.

(It's worth noting that this would all have seemed a lot more remarkable in the late 1970s than it does now, in the era of "reality TV," where we all know that pretty much everything on television is staged to this extent. That Didion manages to write it in a way that makes it feel weird and off-kilter roughly 40 years later is what I'm talking about.5) 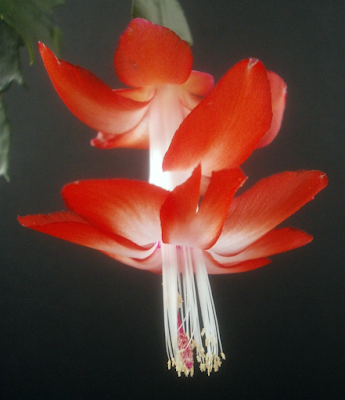 All three remaining names would be perfectly acceptable to me, so I guess it's time to disqualify some of them for silly reasons.

Thermite is an especially good name for an actinomorphic orange and white flower, and I only have one more of those coming up. On the other hand, I really love Joan Didion,6 and this somehow seems like a particularly good flower to name after her although damned if I could explain why. Since I have to jump one way or the other, and since I've gone to all the trouble of transcribing a bit from her essay, I guess I'm going to go with 202A Joan Didion. There will be other opportunities to use Thermite.


1 (As with the majority of the seedlings, the seed parent is 'Caribbean Dancer.')
2 The fancy term for this in flowers is actinomorphic. Wikipedia has a whole article about floral symmetry, for anyone who is interested.
3 Thermite is also notable for being capable of burning under water, as it contains its own oxygen. The basic idea is that you combine a metal oxide with an un-oxidized metal that forms even stronger bonds with oxygen, and then heat it up until the oxygen starts jumping from one metal to the other, which releases more heat, which induces more oxygen-transfer, etc.
The main applications of thermite, as far as I can determine, are in welding, metal-cutting, and YouTube.
4 I don't think this is my original observation; pretty sure I'm duplicating a review of some work of hers I read a long time ago, though I have no idea what review, or what work. It is, nevertheless, a good and true observation, and well worth stealing.
5 Also, yes, there is in fact a hybrid tea rose named for Nancy Reagan, and it is in fact sort of pinkish-orange, though some photographs show it as thoroughly pink or thoroughly orange.
Davesgarden.com says that it wasn't registered until 2003, which surprises me.
6 I mean, that's a strange way to put it, as her writing is rarely very warm or cuddly, and I don't know her as a person. Perhaps it would be more accurate to say I feel a mysterious and strong affinity for, and admiration of, Didion.
Posted by mr_subjunctive at 3:00 AM