Yet another white-blooming Schlumbergera seedling. This is one of the medium-quality white ones: I may or may not keep it around. 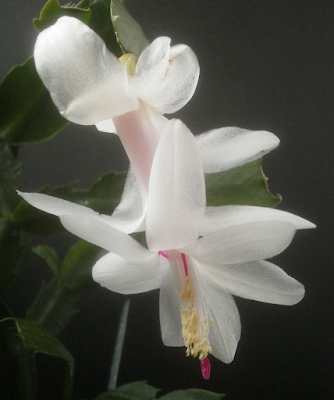 Fog Machine is kind of nonsensical, but, you know, fog is white, this is white, it sort of works. Rental is because from everything I've seen, available apartments are always painted white. Like, always always.1

Glass Slipper was previously considered for 193A Arcade Gannon; it works better as a name for 135A because the photos for this one were lit in a way that showed the translucence of the petals more often. 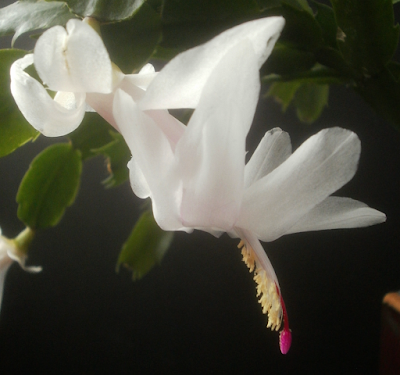 And then there's Chiune Sugihara. He was a Japanese diplomat stationed in Lithuania during World War II, who is now known for issuing travel visas to Lithuanian Jews (as well as Jewish refugees from Poland) to travel to Japan. (From Japan, they were then able to reach various other destinations as immigrants or refugees, with the assistance of the Polish ambassador to Tokyo, Tadeusz Romer.) Sugihara was officially prohibited from doing what he did. Per Wikipedia:

At the time, the Japanese government required that visas be issued only to those who had gone through appropriate immigration procedures and had enough funds. Most of the refugees did not fulfill these criteria. Sugihara dutifully contacted the Japanese Foreign Ministry three times for instructions. Each time, the Ministry responded that anybody granted a visa should have a visa to a third destination to exit Japan, with no exceptions.

By ignoring the official process and issuing visas anyway, he was risking his job.

According to witnesses, he was still writing visas while in transit from his hotel and after boarding the train at the Kaunas Railway Station, throwing visas into the crowd of desperate refugees out of the train's window even as the train pulled out.

In final desperation, blank sheets of paper with only the consulate seal and his signature (that could be later written over into a visa) were hurriedly prepared and flung out from the train. As he prepared to depart, he said, "Please forgive me. I cannot write anymore. I wish you the best."

He is thought to have directly saved about 6000 Lithuanian and Polish Jews, though there's some dispute over the number.2 Not all of the people who received the visas were able to leave Lithuania in time, either: some were captured by Germans during the German invasion of the Soviet Union in 1941 and executed anyway.

He did eventually lose his position in Japan over this, but not until 1947. He was also held for 18 months as a prisoner of war by the Soviets, in 1944-46. He died in 1986, at the age of 86. There's a lot more at his Wikipedia article, including a list of books about Sugihara. 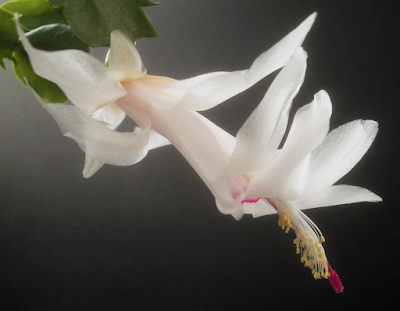 And, honestly, I don't see any point to pretending to consider the other three names. There's something about this story in particular that I find moving -- I mean, there are a ton of other people who risked one thing or another to help save European Jews during World War II. But, I dunno, there's something about this specific story that gets me. (Best guess? Something about the contrast between the incredibly high stakes and the incredibly tedious act. Can you even imagine hand-writing visa documents for 18 hours a day, for 6 weeks?)

I do kind of like Glass Slipper, but this seedling is pretty obviously 135A Chiune Siguhara. 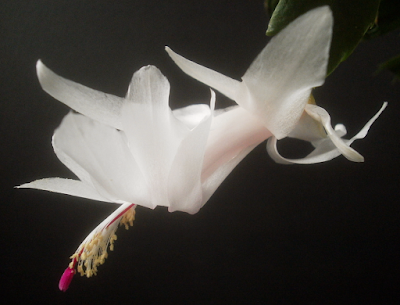 And lest I forget, here's a 352A bud update. The bud has dropped off, as I was expecting it to. So, if I can keep to the schedule I set up for myself and nothing really weird happens, we only have seven more Schlumbergera seedlings to get through this year.


1 Which I understand, of course: it looks clean, it looks bright, and people generally don't have strong feelings about it one way or the other. You probably could get someone to rent an apartment where all the walls in all the rooms were painted an intense tomato red, but not everyone is going to find that appealing, and you don't want to have to show an apartment to more people than necessary, 'cause every person you show to who doesn't wind up renting is a waste of your time. Therefore, white.
And yes, I know it's actually normally off-white. (I assume this is because white-white looks too sterile and cold?) Close enough for our purposes, I think.
2 Which is further confused because some sources cite the number of descendants of those Sugihara saved, instead of or in addition to the actual people. And also nobody was exactly counting at the time, and not everybody who got a visa was saved, and not everybody who was saved had been given a visa, and so forth. It gets confusing. The point is that it was a lot.
Posted by mr_subjunctive at 3:00 AM