Hollee Luja is one of those punny drag names that have been around for a while; I'm sure there have been queens who performed under this name, but as far as I can tell, no individual queen performs primarily as "Hollee Luja."1 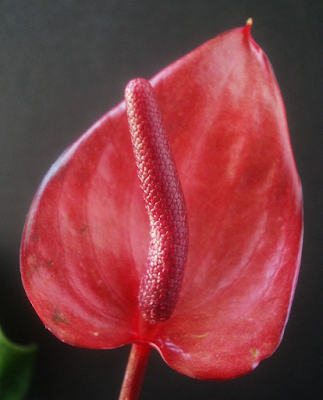 The camera doesn't like Hollee: she's much, much darker red than the photos show. When the camera is tasked with taking a photo of a dark spathe on a dark background, it lightens everything up. Which would be objectionable if I could just turn the photo's brightness down and get an accurate image, but the camera manages to do it in a way that makes it very difficult to adjust.

The leaves are really interesting, though -- both very narrow 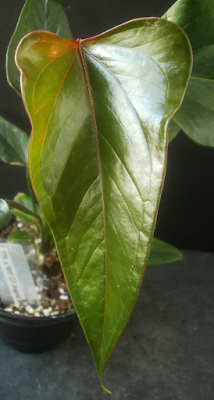 and with red veins on the underside of the leaf. This is a trait that shows up here and there in the seedlings (most notably on 0723 Tara Dactyl), but Hollee seems to do it about as well as Tara. This is possibly related to the fact that Tara and Hollee are siblings or half-siblings.2,3 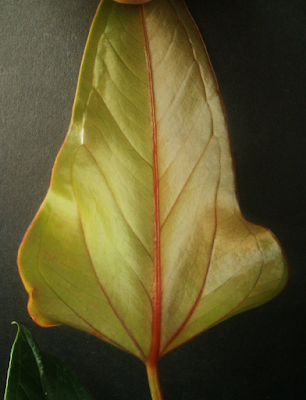 The plant as a whole seems to be nicely compact, as well, though the photo below is more than a year old so it's not the best illustration of this. (Almost all of the seedlings are pretty compact when they're young.) Anyway. I would like to move Hollee up to a 6-inch pot sometime, but space is extremely limited right now: I only have room for maybe ten seedlings to move from 4- to 6-inch. And there are a lot of deserving seedlings.4 So I'm not sure if that can happen anytime soon. Though I'm still having trouble with thrips, Xanthomonas, and ghost mites, so it's possible some of the current 6-inch plants will get thrown out, and then more room will appear. We'll see. 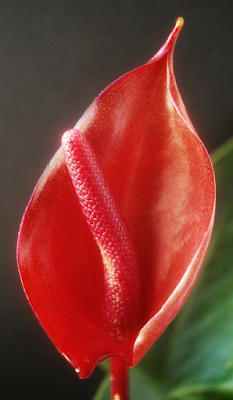 
1 Which I mention only because I was sort of in the mood to do some drag queen research, which is not usually the case, and then today there's no research to be done.
2 Both Tara and Hollee are from seedling group BQ (seed parent was 0005 Chad Michaels, sow date 25 August 2014), which has produced a lot of interesting and pretty blooms:
• 0694 Brad Romance (very large plant, light peach / yellow blooms, long-lasting blooms, very thrips-prone, some weird bleaching on some of the leaves that I can't figure out)
• 0696 Jessica Wild (a pretty run of the mill red / red; small blooms, nice foliage, kinda slow-growing)
• 0698 Landon Cider (decently pest-resistant, long-lived red / purple-red blooms)
• 0721 Chandelier Divine Brown (unphotgraphably striking red / pink blooms, the first of which was pretty small but they've gotten a lot larger with time and a new pot)
• 0723 Tara Dactyl (large red / red inflorescences; underside of new leaves have strong red veining)
• 0842 Pretty Punasti (very large brownish-red to red spathes; spadices start out brownish and age to pink; large leaves)
3 Though I have noticed some tendencies toward red veining on 0116 Eileen Dover and 0120 Eliza Boutisecksis as well, lately. It appears only on very new leaves, fades quickly, and isn't as strong, but it's noticeable enough that I'm surprised it's taken me this long to notice it.
4 Promotion certain: 1299 Sinthia D Meanor.
Promotion likely: 0779 Hollee Luja, 0788 Owen McCord, 0805 Triana Hill, 1265 Inez Paloma, 1268 Li'l Miss Hot Mess, 1325 Dixie D Cupp.
Promotion possible: 0378 Annie Thingeaux, 0648 Bianca Del Rio, 0698 Landon Cider, 0716 Herbie Hind, 0728 Sister Dimension, 0771 Nina Flowers, 0791 Joslyn Fox, 0799 Hope Sandreams, 0811 Alma Children, 0910 Aria B. Cassadine, 1171 Chris of Hur, 1181 Tajma Stetson, 1212 Sweet Pam, 1224 Perry Watkins.
Posted by mr_subjunctive at 3:00 AM