In October 2007, Wonderful Co-Worker (WCW) gave me a Clivia offset. It looked like this: I knew it was too small to bloom, but I like Clivia foliage anyway: it didn't matter to me whether it ever got around to producing flowers. And at this point you can probably tell where this post is going, so . . . 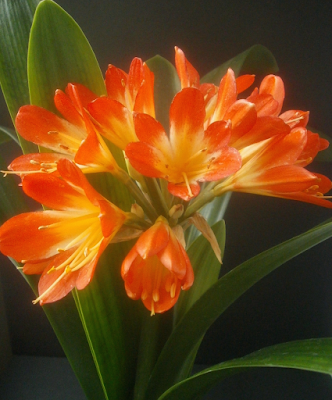 I don't know why it decided to bloom this year: it spent the winter near a window in the plant room, and I know cooler temperatures are necessary for Clivias to set buds, so that might be related, but on the other hand, it's been in the same general part of the plant room since we first got the plant room set up, however long ago that was (2010ish?). For several of those years, it lived on the floor in the corner of the room, which was surely cold enough in the winter, but might have been too dark. I don't remember how long ago it was moved up to a shelf, where it gets some direct afternoon sun, but that might have done the trick too. 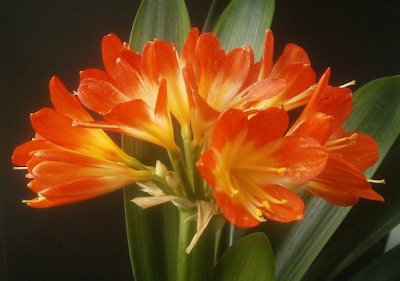 Or, possibly, the plant was just picking up on the recent, much more Clivia-friendly vibe in the house since February.1 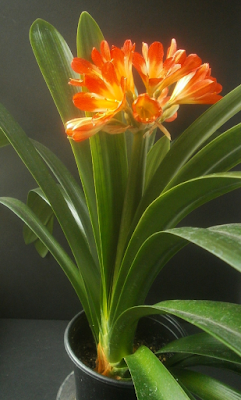 In any case. The plant's only been an actual problem once: it got scale this winter. Hand-wiping the leaves, plus dosing the plant with imidacloprid, seems to have solved that problem. There has also been some thrips damage, which isn't quite a problem, but is still irritating. (The petals are too thick for the thrips to do deep damage, and it's not particularly visible from a moderate distance away, but I'm still not happy about it.) 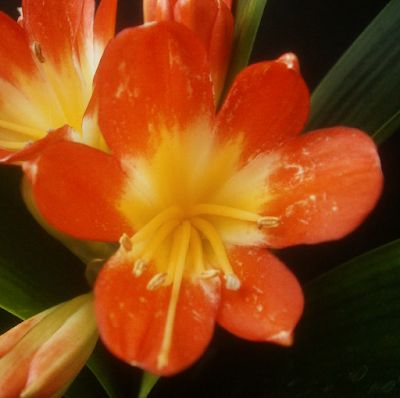 I've tried to spray the flowers with soapy water and then regular water, once. It didn't completely eliminate the thrips, but it does seem to have helped, a little. I'd do it again, except the rinse cycle snapped a petal off one of the flowers. Not that one petal is that big of a deal, but between that and worrying that I'll wash all the pollen out of the flowers and be unable to pollinate them, I'm probably not going to try it again until the flowers are nearly spent. 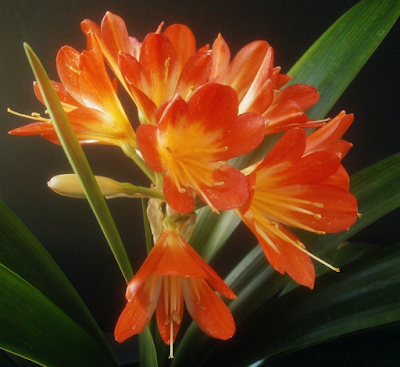 Thrips-related disappointment aside, I've been really happy about the flowers. I sincerely do like the foliage for itself, and sincerely don't care all that much about whether the plants flower, but they're lovely, and it's been such a long wait that I rarely even thought about it as a plant that was capable of flowering. So the flowers have been a nice surprise.

They are, alas, not terribly long-lived -- I first noticed the buds on 5 June, 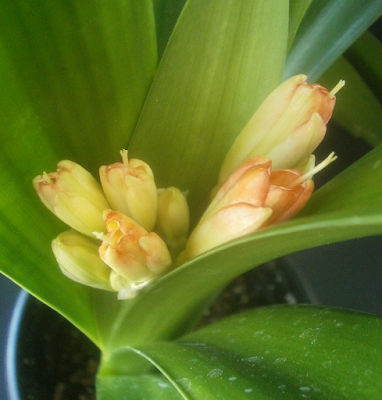 the first flower was open on 7 June, and the first flower started to shrivel and die on 16 June. As I write this, it is 18 June, and there are still three buds on the stalk that have not yet opened, so there should be something still there for another couple weeks, but the blooming process seems to zip by really quickly. Probably I'm just spoiled by the Anthuriums. In any case, having accidentally figured out how to get flowers once, perhaps I won't have to wait a decade for it to happen again.


1 May as well do a seedling update while I'm here, I guess. The February batch started with 77 seeds. Some failed to germinate, some germinated but then died, some started, barely, to germinate and then stopped growing. I currently have 64 seedlings from that group, officially (photo below), 61 of which have produced leaves, and I'm thinking the other 3 seeds are going to be thrown out pretty soon. 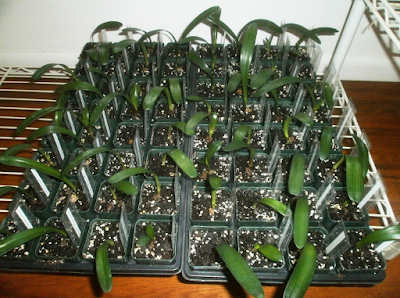 There were 65 seeds in the May group, and I was getting kind of worried about them toward the beginning of June, because it felt like they were germinating more slowly than the February group did, but I think the problem was that I had unreasonable expectations, not that the seeds germinated more slowly. Looking at the records I have, the February batch was sown on 7 February and potted up on 31 March (52 days later); the May group was sown on 4 May, and 52 days after that would be 25 June. It's totally plausible they'll be potted up by then, or at least that they ought to be.
Of the 65 May seeds, it looks like 61 have germinated, so if the same proportion survives, I should wind up with 51 or 52 plants from the May batch by 12 September. Which is a lot of seedlings, obviously.
Posted by mr_subjunctive at 3:00 AM