Annie's mainly notable for her foliage. I mean, the flower is okay, I guess -- 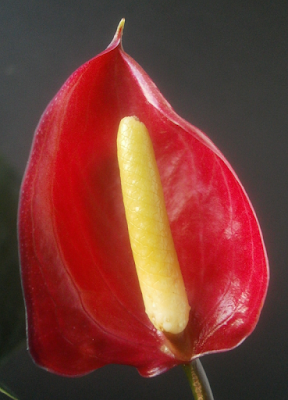 -- but it's not doing anything particularly new or interesting. But the leaves, the leaves are remarkable. They don't photograph all that well, because they're a darker green than normal; the camera has a lot of trouble with dark leaves or spathes on a black background. But it's not the color that I'm excited about, it's the almost total lack of thrips damage. Check it out: 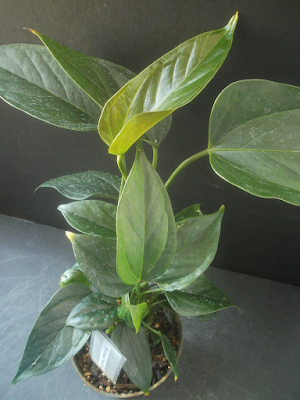 Not flawless, but holy crap, that's so much better than most of the other seedlings. The shape is also a little different than usual, though I'm sort of at a loss for how to describe them. More rectangular than triangular, I guess? 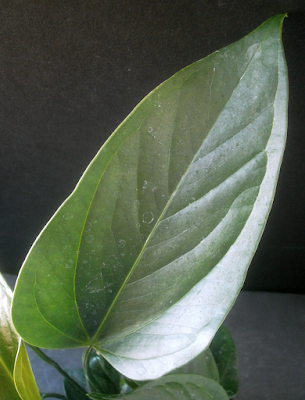 All of which is subtle stuff; I don't imagine you care all that much. But it's kind of exciting to me, especially the thrips resistance part. 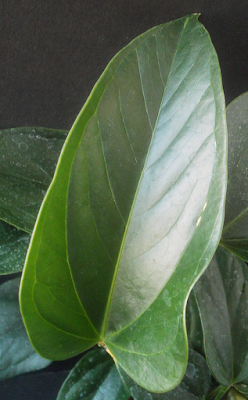 Of course there's a catch. Annie barely blooms. The first bud was in August 2016, forty-one months after her sow date,1 and she didn't manage an actual open bloom until December 2016, so good luck getting her interesting traits into another generation of seedlings. She's a keeper regardless -- she might even have a shot at a promotion to a 6-inch pot, which sometimes also convinces reluctant bloomers to start producing flowers -- but that may or may not ever actually pay off for me. We'll see.


1 The current average, for all 282 seedlings to ever set buds, is slightly over two years. (median 25.5 months; mean 28.5 months) Annie doesn't hold the record for the slowest sow-to-bud time (that record is held by 0105 Deanne T. Christ, who took 54 months), but she's in the slowest 10% of the seedlings.
A surprisingly large proportion of the seedlings in the slowest 10% got thrown out before they managed to produce a bloom.
Posted by mr_subjunctive at 3:00 AM

Congratulations on breeding one with a highly desirable trait!