Bianca is both special and not. She pretty much reproduces the color scheme of one of her grandparents,1 which is not special. On the other hand, she's the second white-blooming seedling, and the first white/yellow combination.2 And she'd be a pretty nice white/yellow, too, if not for the thrips, which love her, so every photo I've taken of her spathes has little brown scars all over them. 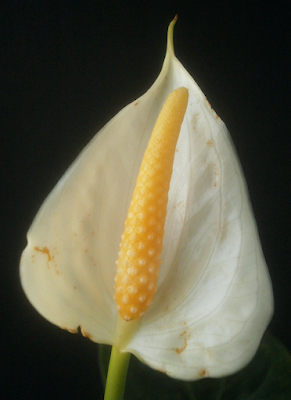 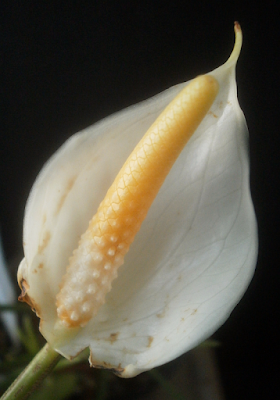 Unlike some seedlings, the thrips go for Bianca's leaves as well: 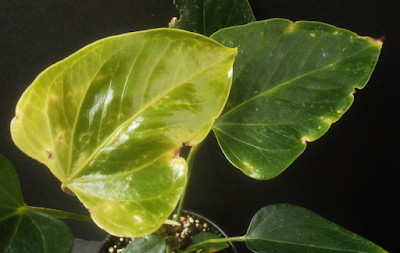 I don't have a very current whole-plant photo of Bianca; I took this one when the first bud appeared, last July, 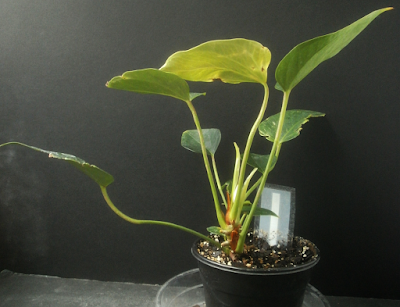 but that bud aborted, and I didn't see an actual fully mature inflorescence until December. And then there was a backlog of Schlumbergera and Anthurium posts in December, so the whole-plant photo winds up being ten months old. The plant still basically looks like this; it just has a longer stem and more leaves now.

Not sure about the ultimate fate of the seedling; it'd be a keeper if not for the thrips, and, in theory the thrips could be eliminated. I just haven't been able to make that happen so far. So for the moment, I'm undecided.

As for Bianca Del Rio the drag queen, I have really mixed feelings about her. I mostly like her standup (NSFW), but she also does insult comedy,3 and I guess I've never understood the appeal of insult comics. But she also has a movie, Hurricane Bianca,


and, I mean, the movie wasn't high art or anything, but it was a lot better than it needed to be, which is impressive.

Also impressive: at the premiere party for RuPaul's Drag Race season 6, she sewed a passable dress in like three and a half minutes, on stage.4


So on balance, I'm pretty fond of Bianca (who, it should be noted, won season 6 of RPDR; it was never even close, really). If nothing else, she's obviously really quick-witted and smart. I just wish she would use her powers for good.


1 Bianca is the daughter of 0276 Zach Religious; my best guess is that Zach is the son of 'White Gemini' (known) and 'Pandola' (speculated).
2 The first white was 1095 Carolina Pineforest, whose spadix was also white.
3 (I looked, but couldn't easily locate a clip on YouTube)
4 Which, it should be pointed out, is not an especially complicated dress, and she used a very stretchy fabric besides, which is a lot more forgiving of irregularities in the cuts and seams than a stiffer fabric would have been. But still: can you sew a wearable dress out of stretchy fabric in three and a half minutes? 'Cause I couldn't.
Posted by mr_subjunctive at 3:00 AM