Unrelated thing: I still have way, way more Coffea plants than I probably ought to,1 and this summer I decided to move them all outside because, I guess, I wanted them to get even bigger and more unwieldy than they already are. And then the weather forecast called for three nights in a row of temperatures in the low 50s (F; equivalent in C is 10-12). I've been assuming for quite a while that the lowest temperature they could tolerate was 60F/16C.

That first night, the low was only supposed to be 54F (12C), and I was like, well, they're under partial shade, near the house, they're pretty close together, so they probably won't get that cold, and it wouldn't necessarily be a terrible thing for me to lose a few of them anyway. Plus I don't want to drag 25 plants in the house and then out again three times. So I let them sit there. And the next morning they all looked fine. The following night, it was supposed to get down to 51F/11C, and they made it through that okay as well. So although I don't know exactly how cold they got, and the temperature was only supposed to dip below 55F for a few hours each night anyway, I feel like I've demonstrated to myself that Coffea can tolerate an air temperature of 55F for brief periods, possibly colder than that. (Davesgarden.com says they're okay down to 40F/5C, but that probably assumes that they're planted in the ground. I'll bring them inside if/when we go below 50F, whatever davesgarden.com says.)

I did have some sunburn on the two largest ones, alas. Should have turned the plants a couple times a day until they got used to it. They're all growing visibly already, though, so I imagine the damaged leaves will be replaced by shiny new ones in no time at all.

So that's the Coffea report. Now for the Schlumbergera seedling.

199A is nice, but nothing we haven't seen a thousand times before. Difficult to get excited about. 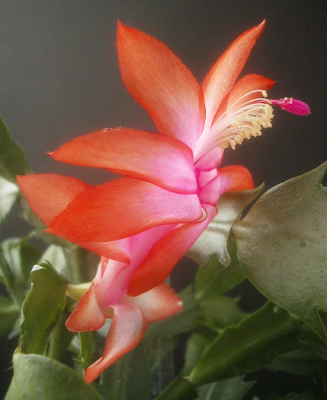 I'm badly pressed for time, so: Along For The Ride, Dusty Springfield, Second Love, and Usually Unmentioned are our candidates this time. 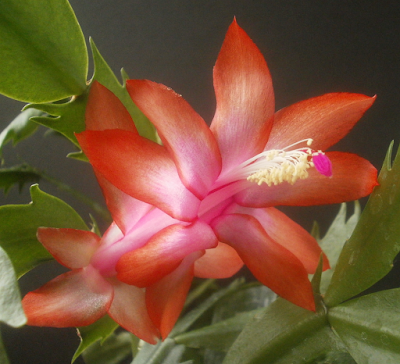 Second Love is sort of a nice idea. First loves are so idealized in movies and TV and whatnot that it strikes me as a little weird. I mean, if you're lucky enough to have a second, third, fourth, etc., they're all special also. First loves aren't necessarily better, just more dramatically interesting. So why not fly a kite for a second love every once in a while? Alas, I decided that while the name was fine, there wasn't really any connection between it and the seedling, so I could probably do better.

Usually Unmentioned seems like an okay name for a seedling that's just one more orange/pink in an increasingly ridiculous line of orange/pinks. (Of course it's usually unmentioned -- why would you mention it?) But I discarded this one too. This year's Schlumbergera seedlings have shown me that some seedlings are consistent from one year to the next, and some of them change pretty dramatically. It wouldn't do to have a fantastic, amazing, one-of-a-kind seedling be Usually Unmentioned. 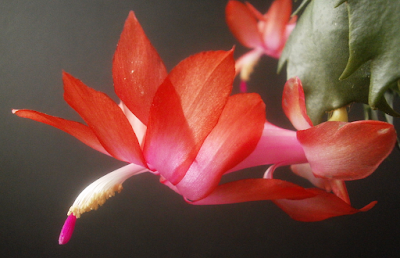 Along For The Ride kinda worked, because when I was making these decisions I was in the car in Iowa City,2 and although I had business in Iowa City and so had to go, I wasn't doing anything about it right then. The seedling, similarly, isn't doing anything incredible, but its siblings got to be potted up and show their stuff, so it got to be potted up as well. I don't dislike this name, but it's kind of bland, and I decided I liked Dusty Springfield better. 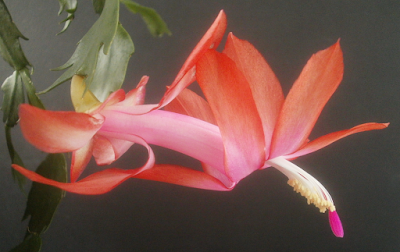 So, 199A Dusty Springfield. Finally.

Just four more Schlumbergeras and then we're done for the year, by the way.

Hi! I'm the anonymous from before with giselle! I had to suggest a few more names that struck me as appropriate for colorful seedlings....don Quixote and corsair are both appropriately red/orange ballets. Colorfully red/orange operas would contribute the names Tosca and Figaro (both names I used for my cats) and Onegin works for another white flower based on the Russian snowy story. I hope they'll be added to the list! Very nice final name. :)