Only got one flower from 198A, and only one photo of that one flower. 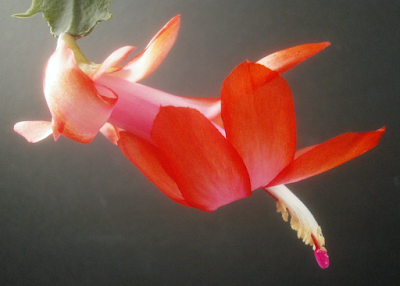 The name finalists all started with P or R this time: Pat Benatar, Prophecy Of Joy, Reaffirmed Result, and Recurring Dream.

Both of the "R" names are just ways of saying "this again."

Pat Benatar is, of course, the classically-trained, Grammy-award-winning singer of "Hit Me With Your Best Shot," "Love is a Battlefield," "Fire and Ice," "Shadows of the Night," "We Belong," and a gazillion other songs you may or may not have heard of. I wouldn't have thought of naming a seedling for her, but in March, someone made a MetaFilter post about Duran Duran, which linked to Christian James Hand's analysis of their song "Rio," which was pretty damn mindblowing for me personally.1 And I wanted more, and it happened that the next week's analysis was of "Love is a Battlefield," and when they played the track of Benatar's vocals by itself, I was like, oh my god, I can't believe I've never noticed how amazing Pat Benatar was.2 I didn't know she had been trained as an opera singer, but it's not surprising at all if you listen to the vocal track.

I don't know where Prophecy Of Joy comes from for sure -- probably a random word combination? -- but I like it.

So. Going to drop Pat Benatar first, on the grounds that I think she deserves a more impressive flower. And of the two "this again" names, I think I like Recurring Dream better, so we can lose Reaffirmed Result. Which means it's a choice between Recurring Dream and Prophecy Of Joy, and I think I'm more in need of optimism than accuracy right now.3 So: 198A Prophecy Of Joy.


1 I'd never given all that much thought to how "Rio" was constructed before, is part of the mind-blowingness: if I'd had access to the separate bass, drum, vocal, keyboard, and guitar tracks like they do in the link, I probably would have thought about it a lot.
There is a certain amount of obnoxious DJ chatter to get past, unfortunately, but the payoff is worth it.
2 Which is not to say I didn't like her; I have a particularly special relationship with "Shadows of the Night." I'd just never really paid attention to her vocals specifically. The relevant part of the discussion begins at 14:41.
3 And at most other times, to be honest.
Posted by mr_subjunctive at 7:20 AM