Not the most obvious / appropriate color for a seedling named "Milk," I'll admit: that's how it goes when you assign the names before seeing the flowers. But even if the name doesn't make sense, it's still pretty: 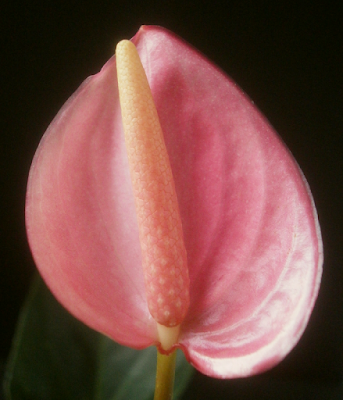 It may not be apparent from the photos, but the color when the spathe first opened was straightforwardly pink (below), which gained a slight lavender tinge as it aged (above).1 Subtle, yes, but I don't think I was imagining it. 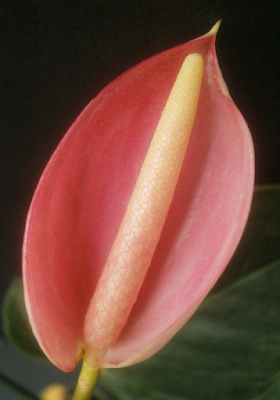 And it's already bloomed twice, while in a 3-inch pot, which earns it a few points for enthusiasm.

Admittedly the foliage could be better. It's not especially terrible, and the new leaves are interestingly colored, 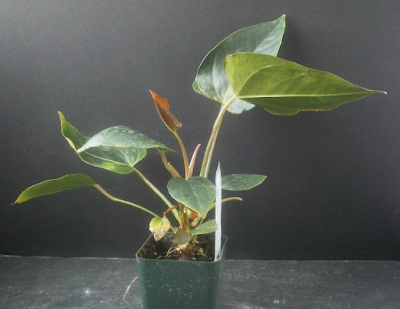 but when you get up close and check it out, the leaves are a lot less pristine than the spathes, alas. 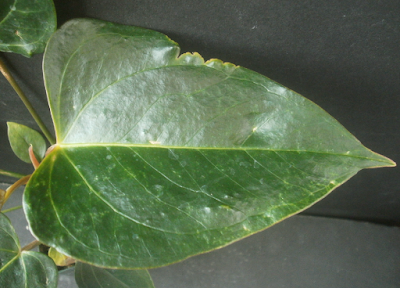 It's still probably a keeper. Not the most fascinating color, but there's genetic potential, the thrips resistance is good, and it's enthusiastic.

Milk is from seedling group DT; only one other DT seedling has bloomed so far, and we'll get to it in about three weeks.

The drag queen known as Milk is forever close to my heart for her involvement in this video, which I find wildly entertaining every single time even though it's dumb and I've watched it like 600 times already:

Milk was also a contestant on Season 6 of RuPaul's Drag Race, where she was notable mainly for being unusually attractive out of drag3 and for doing a bit more genderfuck-type looks than Ru and the other contestants were comfortable with. Since Drag Race, she's been all over the place doing various things, and I do mean all over the place -- as I write this, his most recent video4 is about preparing to go to Zambia to volunteer with www.africanimpact.com.5 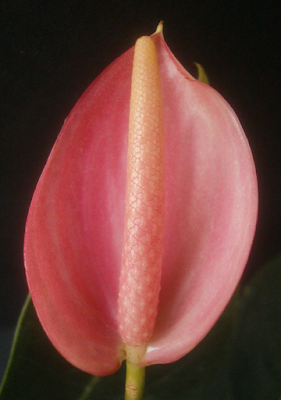 So I'd probably be a fan even without it, but the "he went to Jared" video is why I will always love Milk.6


1 The seed parent was 0234 Ross Koz, which has a purple-pink spathe when it first opens, so it's conceivable that Milk has inherited genes for very weak production of the pigment peonidin (responsible for purple Anthurium spathes, which can be either purple or pink depending on the pH within the cell). This would be exciting if true. I like the purples, and don't get to see them very often.
2 The other two are Vivica James and Sick Nasty, collectively "Nasty James." I don't know which is which, because it's disappointingly difficult to find anything else of theirs on-line: searches for "nasty james" return a lot of stuff about people named James, either being nasty or in close proximity to nasty things.
3 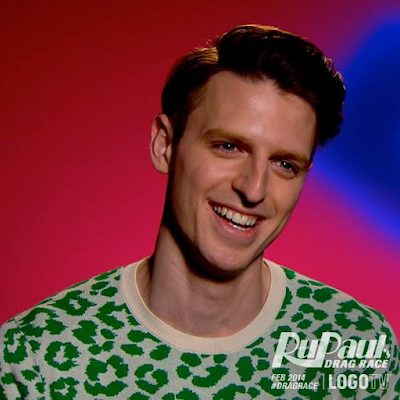 (screencap from the show, via Pinterest)
4 Taking a pronoun clue from the clothing; I have no idea what Milk prefers personally.
5 Granted, the video is kinda self-congratulatory and about twice as long as necessary, but . . . shut up, Mr. Subjunctive. You can complain about that when you do something comparable (and/or look that good in a mesh tank top).
6 Unless he milkshake ducks me, which is happening so often that I'm starting to think it's a bad idea to like anyone ever. Or possibly it's a bad idea to ever learn anything about anyone you like but don't actually know personally.
(Far as that goes, it's often also a bad idea to learn things about people you like and know personally.)
Posted by mr_subjunctive at 3:00 AM

I just discovered your blog today when looking for information about the Silver Squill (Ledebouria socialis), I love your informative yet funny style of writing! Also, you like Milk, one of my favourite drag queens!? I've struck gold.

I don't have anything more to say about Anthuriums. So here is a question. Is this dancer a drag artiste? Would they have to wear a blouse? I think every other element necessary is present.

Drag's not really the sort of thing that lends itself to bright-line definitions. That video is sort of reminiscent of some of Boy Child's videos, the difference being that Boy Child has breasts, so . . . sure? Maybe? Unless the performer specifically says it is or isn't drag?

I mean, I don't really know how any of this works, so I'm probably not the right person to ask.