I've recently been reminded that "Madison," as a girl's name, was more or less invented by the 1984 film Splash. (Daryl Hannah's character chooses the name by looking at a street sign -- Madison Avenue. At the time, nobody named their girls Madison, which the film lampshades ("Madison? That's not a name!"), but by 2001 everybody named their girls Madison so that joke didn't really work anymore.1

That's only slightly related to our seedling of the day, but it's still interesting.2 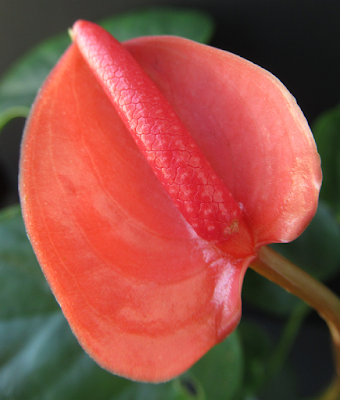 This is another case where my old camera and new camera have different takes on the bloom color; the old camera thought the spathe was a pretty straightforward orange, 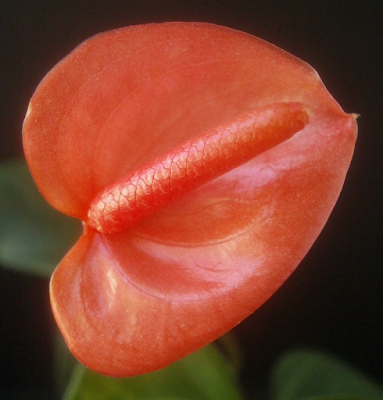 whereas the new one puts a little pink into it. 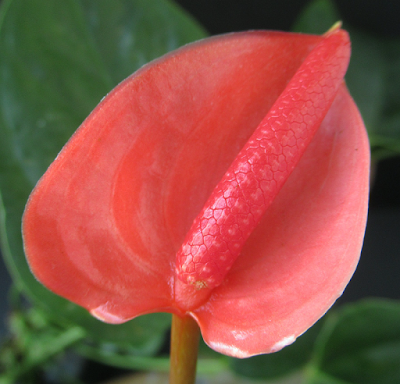 In person, my eye agrees with one camera some of the time and the other camera the rest of the time, so I honestly can't tell you what color this seedling is.

The seed parent is 0330 Faye Quinette; Faye's seedlings are often kind of in-between colors like this. (In particular, 1666 Horrorchata, from the same seedling group,3 is on the continuum between orange and pink as well, though Horrorchata leans more to the pink end, while Madison favors orange.)

The foliage is just okay; there has been some thrips damage. (Not a lot, but enough to be obnoxious.) 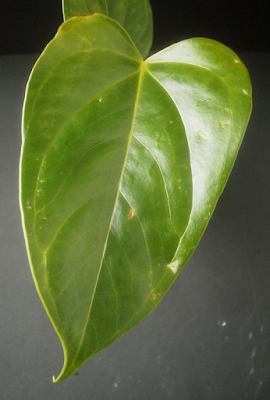 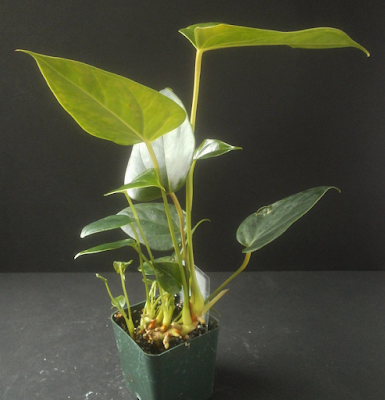 I expect to keep the seedling, if for no other reason than to hang on to as many of the genes from 0330 Faye Quinette as possible. Though if the thrips get a lot worse, I may have to reconsider. (No sign of that so far.)

Madison's not so interesting that she should have gotten a post to herself, but I also wanted to recommend a houseplant-specific podcast I've recently encountered, Jane Perrone's On The Ledge, and I didn't want the recommendation to be buried under a bunch of Anthurium photos.

Perrone is in the UK, so sometimes the concerns are a little UK-specific (like, I have no idea why getting a variegated Monstera deliciosa is a big deal, but it comes up a lot4), but that sometimes makes it more interesting. And in any case, if you're interested in houseplants, it's probably worth your time to look through the archives and try an episode. If you need a recommendation, I particularly liked Episode 44, because a lot of interesting historical details get dropped in along the way.


1 Technically, in 2001, everybody named their girls Emily. But Madison was the second most popular girl's name.
2 (Yes it is.)
3 (FE, which also produced 1634 Helena Handbag)
4 (As do claims about how ridiculously easy Aspidistra is to grow. I discarded four Aspidistras between 2007 and 2013 before giving up on the genus, so this always makes me grit my teeth a little bit.)
Posted by mr_subjunctive at 3:00 AM