I'm not a big celebrity-watcher, normally, and in fact I only bothered to track down and watch an Amy Winehouse video a few weeks ago. I knew what she did and what she looked like, but she doesn't sound like someone who looks like that, or doesn't look like someone who sounds like that, or whatever, so I would never have put her and her music together spontaneously. So but finally I get on YouTube, dig up and watch a video of "Rehab," and now I totally get what everybody was talking about.

Amy Winehouse. Screencap from the "Rehab" video.
So now I'm a little worried about Ms. Winehouse. Fate has not, historically, been kind to drug-addicted female musicians, and there's no reason to think that the fundamental rules responsible for that have changed. 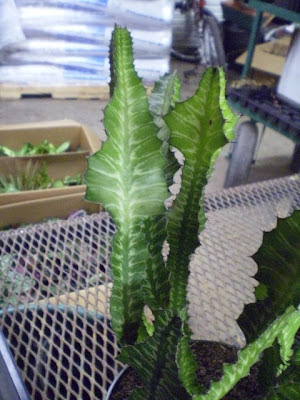 The above picture is how the plant looked when it first arrived off the truck (you can even see some other plants in the background which hadn't even been unboxed yet). By the time I got it home, though, it had been moved around and jostled enough to give itself a bunch of punctures and scrapes, where the thorns on one stem had beaten up the next, and a lot of the plant actually had to be cut off, because the various punctures turned brown and black and spread up and down the stems. Things have straightened out a little bit since then, but it was kind of scary there for a while, 'cause I thought I had bought a plant that was going to kill itself before it even acclimated to the house.

It's not the easiest plant to get information on: Aiyana at Water When Dry says it's from Mozambique, it will develop a woody trunk over time, and this is not necessarily a succulent for full sun. I would have believed her anyway, because she's Aiyana, but I've seen all three bits of information on other websites, for those of you who don't share my confidence in her.1

Aside from that, though, I haven't been able to find anything about this one, and I've only had it at home for about a month, which is not long enough to really have gotten to know the plant. There are occasional references to it dropping pieces of itself on the ground, at the slightest provocation, and it's true that the joints connecting segments to one another don't look especially sturdy. My own plant hasn't dropped any segments, but it's easy to see how it might not survive a good solid bump. Aiyana also asked, in the comments for Euphorbia pseudocactus, whether I knew why some of the stems of her plant might be dying back: I had no good theories at the time, but now, I'm thinking, well, maybe it got bumped, or moved, or it scraped itself up during a sudden gust of wind, or something like that. They don't seem to take punctures of any kind in stride.

Also like Ms. Winehouse, Euphorbia bougheyi variegata is also supposed to be a little bit mean:2 it has the standard irritating sap of the Euphorbia genus, plus the thorns are small, but sharp enough to cause minor injury.

I'm assuming that care is basically the usual Euphorbia care: let it dry well between waterings, propagate through cuttings which have been allowed to dry for a few days, watch for mealybugs and scale, bright light though not necessarily full sun, dry air is fine, fairly normal range of temperature tolerances, no exceptional feeding requirements. On top of that, though, let me add: keep it away from strong winds, animals, children, high-traffic areas, or anything that might disturb it, because it will cut itself to pieces at the slightest provocation. Just like certain celebrities.

Photo credits: plant photo is mine; map is from Wikipedia article for Mozambique.
1 ;^)
2 Apparently Winehouse occasionally beats up her boyfriend-husband-ex? Or he beats her up? Or both? I'm kind of late to the gossip; help me out here.
Posted by mr_subjunctive at 4:00 AM

I think I read she has like twenty million dollars in the bank... if I were her, I'd just drop the whole music scene and go far away to a beautiful island and heal myself... she'll be dead soon at this rate. Hope your euphorbia lasts that long.
Don

Interesting how close the word Euphorbia is to the word Euphoria which I assume is what she stupidly gets from taking drugs. If only she would take up gardening instead and get the same effect more cheaply and lasting a lot longer.

I suppose "sex, dirt, and rock-n-roll" doesn't have a terrible ring to it.

I would hate for her to stop making music altogether, for whatever reason: I just got Back to Black yesterday, and I'm pretty sure I'm going to like it a lot.

Personally, I think Euphorbia bougheyi variegata is more attractive than Amy Winehouse, although there is a strong resemblance.
My E. bougheyi finally dried up completely. I stuck a couple of segments in some pumice to see if they would root, but after a couple of months, they too dried up. I really liked that plant, but I certainly won't get another. Too finicky for my collection. Perhaps the reason the whole problem started with mine was because the plant tipped over in a windstorm and had some bruising that I didn't see.
Aiyana

If that's the plant I used to have once, then segments are not that easy to break at all - a wire-like stem that runs through the plant length-wise is one good way to make sure the plant doesn't begin to lose parts like Mr. Potato-head.
When I used side branches for propagating, I was just twisting them out of the parent stem as I would twist a pineapple's top.

I have a plant that was a gift that is just labeled "euphorbia" though it's not the variety addressed in this post. Each plant is, at this point, a single stem with alternating leaves that circle the stem. It's getting terribly leggy and too tall for any of my catproof shelves. If I pinch it back, will it branch nicely, do you think? Or will I kill it?

It's sort of hard to say without knowing what plant it actually is. I mean, "Euphorbia" is helpful, but plants don't always get tagged correctly, either. I don't think there are any Euphorbias that can't be cut back, but I'd still want to know which one it was before giving advice on it, on the off chance that it's something else.

"Alternating leaves" doesn't suggest very many options to me, but my best guess would be Pedilanthus tithymaloides (which is technically a Euphorbia now); do a google image search for that and see if it looks like yours. Failing that, try looking for:

or e-mail me a photo.

What a sad fulfillment of this half-joke-prophecy.