A couple weeks ago, the husband and I went on one of our country drives, which I've mentioned before, and I was noticing a bunch of weeds in the ditches and along the sides of the roads. When we got back home, I spent some time trying to figure out what I'd seen, but the government-run weed/invasive plant websites are surprisingly incomplete. Like, there'll be a bunch of information about how they're widespread across all 48 continental U.S. states and all but the northernmost provinces of Canada, and then the one picture you get for the plant is a picture of the seeds. And I'm like, come on. If they're that widespread, how come you can't find anybody to take a picture of them?

My thinking is that the government needs to get in on this Wiki business and solicit photos from the public. It'd be cheap, they'd get complete photo sets for everything, and they'd have, essentially, a bunch of volunteers around at all times to identify pictures brought in by the public. I can't imagine wikis are terribly hard to set up, either.

Though I wouldn't want to be the one to do it.

It's also possible that I was having no joy on the IDs because these are in fact not weeds, but native wildflowers of some kind, in which case one wouldn't expect them to appear on lists of invasive plants. But I bet at least two of the three are non-native.

But anyway. So but the pictures: 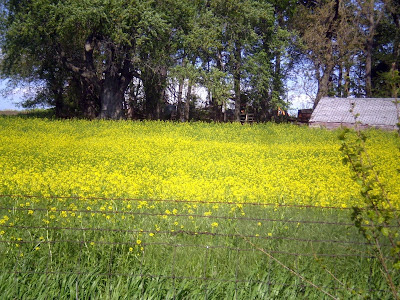 These bright yellow flowers were everywhere in mid-May, though generally by themselves in little patches in the fields and along the sides of the road. I kind of got the impression that they were being deliberately encouraged in this spot, 'cause the patch was basically composed of nothing else. Made for a good picture, in any case. I don't know whether any of the flowers are close enough to the camera to be identifiable or not. (As always, you can click on the picture for a larger, more detailed version.) 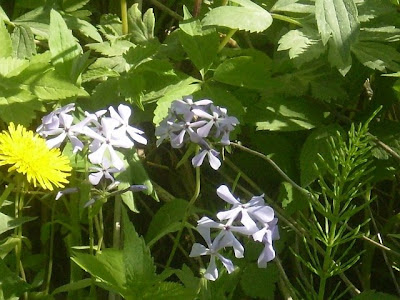 This plant seemed really, really familiar to me, like maybe I'd seen it planted on purpose in a neighbor's yard or something when I was a kid. I couldn't place it, though, and the spot where I took this picture didn't look like it had ever been cultivated; it was on a fairly steep slope down. At the top, a bunch of trees being all foresty-looking, and at the bottom, a ditch. I couldn't get a good shot of the rest of the plant; as you can see, it was all kind of entangled with a bunch of other crap. 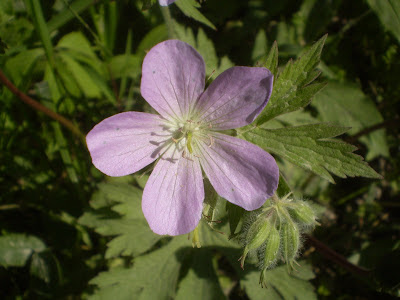 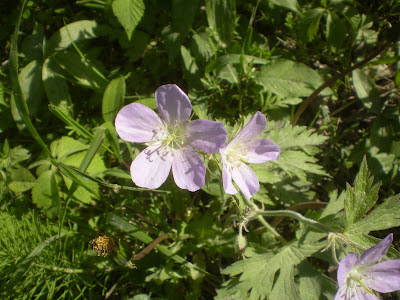 I think this last one is pretty awesome, though I'm also pretty sure it's a weed. Both of these pictures blow up much larger (the first one is big enough to see actual bits of pollen in the center of the flower). This was also familiar to me from childhood, though not in a way I can place.

If anybody happens to know what these are, please post IDs to the comments. I've been curious.

The last one looks like Geranium maculatum to me. If so it's a native plant, which is nice.

Whatever they are, they are beautiful en masse.
Aiyana

I would guess the middle one to be phlox.

Lovely photos. The first yellow flowered plant could be either wild mustard (sinapis arvensis) or if it's cultivated, rape seed (brassica rapa). The second looks like bouncing bet also called soapwort for its ability to produce lather when mixed with water and rubbed (saponaria officinalis). The last picture looks like the meadow anemone (anemone canadensis). All lovely plants. The bouncing bet has a mild wonderful scent.

The yellow one is definitely something in the Brassicaceae family - we always called all of them "mustard".

The middle one is a phlox. Probably Phlox divaricata.

The last one is a Geranium.

The USDA actually does have a plant database with links to photos and other resources. It's not quite a wiki, because that would be way too cheap and simple for a government program. Here's a link to Geranium maculatum for Iowa. However, the database is pretty useless for ID unless you already know what you're looking for.