The Name of the Blog 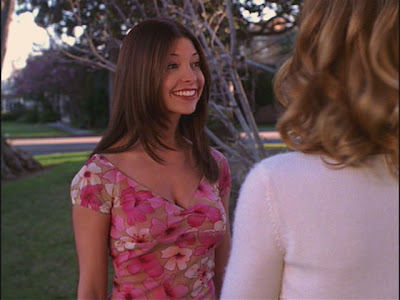 This picture is a clue.
Some of the other garden bloggers (e.g. Clay and Limestone, Soliloquy, The Gardener Side, The Brenda Blog) have done posts recently about how they came up with the name for their blogs. It's on the verge of becoming a full-blown internet meme, even.

And that alone wouldn't necessarily get me to do it, but it sounded like a post I could do fairly easily, with no research (except that it turns out that I did have to do some research; it seems that I always have to do research). So.

"Plants are the Strangest People" is a slightly altered quote from the TV show "Buffy the Vampire Slayer."

Specifically, it's a slightly-altered quote from one of my favorite episodes,1 "I Was Made to Love You," in which a mysterious but sweet-seeming stranger named April shows up in Sunnydale looking for her girlfriend Warren.

April turns out to be a robot, specifically a sexbot created by Warren, who got tired of her and became interested in an actual girl, Katrina. As April has been programmed only to be totally in love with Warren, and is wicked strong besides (because: robot), this is kinda dangerous for Katrina. The episode ends with a fight between April and Buffy, at the end of which April's batteries begin to run down. Buffy sits with her until April shuts down completely.2 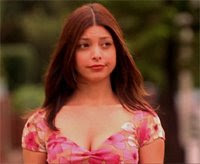 April (Shonda Farr), looking for Warren.
Which leads to the following exchange between Xander and Buffy, while Xander is repairing a window that got broken because April threw somebody through it:

BUFFY: Yeah?
XANDER: One of the cool things about that, you see is, uh, the jamb can be shimmed to be square, even if the opening isn't.
BUFFY: Shimmed? Is that even a real word? Do you have any idea what you're talking about?
XANDER: Yeah, I do. (smiles) Scary, isn't it? I think I've actually turned into someone you want around after a crazed robot attack.
BUFFY: And if you ever start your own business, you have your slogan right there. (pauses, looks thoughtful) And she wasn't crazed.
XANDER: Yeah?
BUFFY: She devoted everything to making this one person happy. And then it was like, with him gone, there was just ... no reason for her to exist any more.
XANDER: Robots are the strangest people.

Somehow, that one line worked its way into my head. Then one day at work, WCW was talking about something unexpected that one of her plants had done, and without thinking about it I said, "Yeah, well, it's like they say, plants are the strangest people."

Which also stuck with me.

I'd been contemplating doing a blog for a while prior to this, and had been having trouble coming up with a workable angle for it; once it occurred to me that I could organize the blog around different types of people, I knew I had a workable hook.3 I registered the address with Blogger on 30 September 2007, and then spent a few weeks writing some profiles so I would have some content to start with, and made them public on 18 October 2007.

So now you know.

Another quote from the episode that really resonated with me, while I'm on the subject, was this one (For the record: Anya actually is 1100 years old; she's not exaggerating. Long story.):

Anya: Well, at first [going online] was confusing. Just the idea of computers was like, whoa, I'm eleven hundred years old: I had trouble adjusting to the idea of Lutherans.
Tara: Well, I go online sometimes, but everyone's spelling is really bad. It's depressing.

Not sure what blog title could be made from that quote, though.

1 A Jane Espenson episode, in fact. Which are always the best ones.
2 Apparently, Britney Spears was intended to play April at one point, but the scheduling didn't work out, so we wound up with Shonda Farr instead. Thank God. Not that Britney couldn't have done it, but it would have been distracting. And I actually really, really like Shonda Farr in this.
3 Regular readers might be surprised at how planned out the whole blog concept was. I'd tried blogging before -- in fact there are six other blogs of mine out there, all published under the same nom de blog (which I will not tell you), not related to plants (except the last one a little bit), dating back as early as (in one case) summer 2004. I think they are all, without exception, weirder than PATSP. In any case. I had run into the problem with some of them that I had too narrow of a focus, and could only think of just so many things to say that would fit inside the parameters I had established, so they ended even though I didn't necessarily want them to, just because I'd painted myself into a corner. At the same time, I didn't want a blog where I could just write about anything and everything with no constraints at all either. So, I picked the specific content of houseplants, and the specific structure of the plant profiles, and the rest has kind of developed on its own. What was notable about the title "Plants are the Strangest People" was not that it suggested blog posts all by itself, but that it seemed to be flexible enough to accommodate more stuff if I wanted to do more stuff. And -- wow, you're really going to read this whole footnote, aren't you? 'Cause I'd have thought you'd be bored by now. Anyway. -- So the quote gave me the title and the title gave me the tone and structure, and the tone and structure have given me the posts.
Posted by mr_subjunctive at 2:30 AM

Glad you joined in gardenblogger meme or not! Hanging out at Blotanical, I saw all manner of interesting names and seriously wanted to know how they decided on the final name!

I still miss Buffy and the Scoobies!

Fascinating post. And I actually did read the whole footnote. I had thought about a blog for a while, but I know I wouldn't have the discipline to post regularly enough. And I wasn't sure what my angle would be. And here you are, doing what I wanted to do, only way better and I don't have to do the work! Many thanks.

Fascinating footnote -- a great ending to an interesting explanation of how you chose your blog's name.

Wow, Mr.S.! Who'd'a thunk?! Here all this time I thought you were taking a jab at Jerry Baker and his "Plants Are Like People" line. (And, anyway, why DIDN'T you want to have a blog where you could talk about whatever entered your mind? We think it's kinda fun!)

I just had a thought: "Oooh, maybe if my Buffy-loving boyfriend reads this, he'll get into gardening!" And then the realization followed that, no, he would only admire your blog. :)

Interesting to know the name behind the blog...

I've often wondered how you came up with your blog name. Now I know. Since I've never seen the show, I would have never put the whole thing together. This is one exercise that I find really interesting. Think I'll do a post myself. I've loved reading everyone's reasons for naming their blogs.
Aiyana

Well, you know how the LOLcats are always going NOM NOM NOM when they're eating stuff? It's like that:

So, Mr. Sub, what did you think of the grand finale show? Disappointing or not? Love the footnote and the quote about poor spelling, a pet peeve of mine, except when I do it myself.

I thought the finale was okay. I mean, it hit all the right points. By the time the end of season seven came, though, I was kind of just irritated with them. The season holds up better on DVD, but watching it week by week I got to the point where I was kind of like, oh my God, from beneath you it devours, big fight coming, I know, I know, I know, please try to work a little bit of plot into your foreshadowing. So I thought it was: fine. Was not thrilled with the casualty choices.